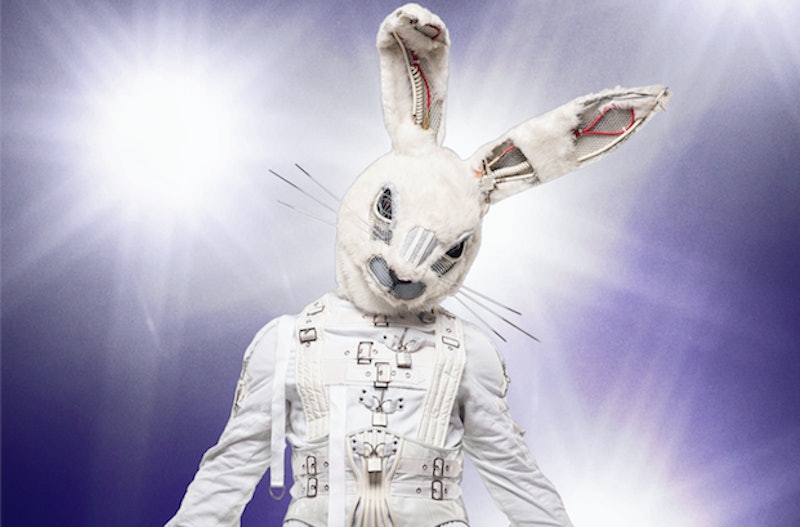 Spoilers ahead for The Masked Singer Season 1, Episode 2. Fox's bonkers new competition show, The Masked Singer, has so far revealed only two of its costumed celebs. That leaves a lot of guesses still left to be made about the remaining 10 contestants, but after the Jan. 9 episode, judges seem to be narrowing in on another one of their identities. The predominant theory about the rabbit on The Masked Singer suggests the bunny-eared singer is a seasoned performer — and more specifically, a former (or maybe even current!) member of a boy band.

During the episode, the rabbit dropped a few clues about his identity. First, he said he's "been training for this my entire life" and specializes in "synchronized singing." Next, he revealed he has "spent most of [his] life onstage" but was "never alone." And finally, he made a pointed reference to the pop genre, saying, "I pop up here and I pop up there." This prompted the judges to piece together that the rabbit is (or at least was) in a boy band. Whether or not that's accurate remains to be seen, but based on that evidence, it's a pretty convincing theory. One last clue? The rabbit's height is listed as 5'11" on the show.

With all that in mind, there are a few guesses to be made about who could be behind the mask.

Due to his commitment to character, some of the Masked Singer judges believe the person behind the rabbit mask is an actor, and *NSYNC alum Joey Fatone certainly fits the description. Having appeared on both Broadway and in various films and TV shows, he has the pedigree, the correct estimated height, and the acting chops to be the one behind the mask. One of the judges even guessed his name, but Jenny McCarthy insisted that Joey has more of a gut than the rabbit.

The former Backstreet Boy is estimated to be six feet tall, which is close enough to 5' 11" that a website could believably be an inch off. He also has the boy band history and the vocal ability to pull off the rabbit's singing and dance moves, but he lacks the acting background that some of the judges are convinced the rabbit has.

How famous is too famous for The Masked Singer? Ricky Martin is not only a former Menudo member and the king of Latin pop, but is also a prolific actor who delivered a heartbreaking performance as Gianni Versace's partner, Antonio D'Amico, in 2018's American Crime Story: The Assassination Of Gianni Versace. It may seem a little too obvious, considering the tabbit's debut song was "Livin' La Vida Loca," but there's something to be said for hiding in plain sight.

Fans won't know with any certainty who's behind the rabbit mask until he's officially revealed, but if you're trying to impress all of your friends by guessing right, looking to previous boy band members may be the best place to start.