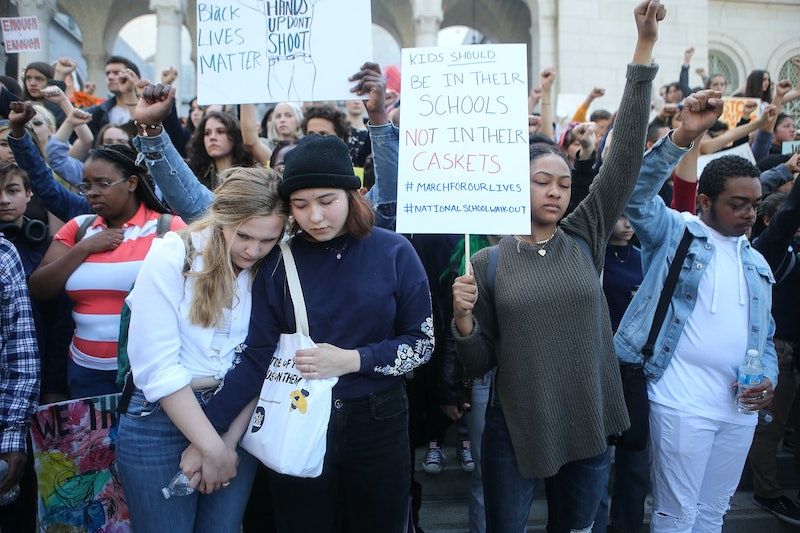 Thursday marks the one-year anniversary of the school shooting in Parkland, Fla., a tragedy that claimed the lives of 17 students and staff at Marjory Stoneman Douglas High School. Parkland became a catalyst for a nationwide movement for gun control as well as legislation to prevent future gun deaths. But even with constructive changes, mass shootings can impact young survivors' mental health well into adulthood.

In recent years, thousands of Americans' lives and communities have been impacted by mass shootings — the Gun Violence Archive has already counted 37 shootings of four or more people in 2019 alone. And while the media cycle eventually moves on, for survivors, the mental health effects of living through severe trauma can often have long-term impacts, according to the American Psychological Association (APA). As clinical psychiatrist Dr. Jean Kim, an assistant professor at George Washington University told PsyCom, trauma such as mass shootings can have "lifelong and pervasive effects on young developing psyches, both in terms of their psychological worldview, and their physiological systems that handle stress and anxiety."

Dr. Melissa Brymer, director of terrorism and disaster programs at the UCLA-Duke National Center for Child Traumatic Stress, tells Bustle, "In some of these events like Parkland, this one year means one year without their loved ones. We're dealing with both trauma and grief in many of these cases." She says it's important to make the distinction "because trauma we can treat, there are good treatments for it. Grief, we learn to adjust, we learn to find meaning of the loved ones lost, but it's a different course of recovery."

According to the National Center for PTSD, 28 percent of people present during a mass shooting go on to develop post-traumatic stress disorder (PTSD). Other mental health disorders, including major depression, generalized anxiety disorder, and drug and alcohol dependence, are linked to surviving mass shootings. That's according to a 2017 Trauma, Violence, and Abuse study by clinical psychologist Sarah Lowe and physician and epidemiologist Sandro Galea.

Lowe and Galea also found that the incidences of mental health disorders were more severe for people who knew the shooting victims personally, or were injured in the attack — conditions that apply to many current and now-former Parkland students. And even members of the media who cover shootings, or physicians who treat victims are at risk, according to Brymer. The long-term effects of PTSD are also likely to be worse for women, minorities, and low-income people, according to a report from the Substance Abuse and Mental Health Services Administration (SAMHSA).

"I don’t feel safe anywhere anymore," Anna Crean, a sophomore at Marjory Stoneman Douglas told The New York Times on Wednesday, describing how PTSD has made it difficult to handle sudden noises and active shooter drills in school. "Fourth of July, I was at camp, and I wasn’t expecting fireworks to go off, but they did," she told The Times. "I had a panic attack."

Josh Stepakoff, a board member for Women Against Gun Violence, echoes those anxieties. At age 6, Stepakoff survived multiple gunshot wounds during an anti-Semitic shooting at his Jewish day camp in Southern California in 1999. Now in his mid-20s, he says the effects of the trauma have evolved as he's grown.

"As a kid, any time I heard sirens, any time I heard helicopters, saw police offers, anything like that I would freak out. I would kind of have a full-blown panic attack and I would have to isolate myself," Stepakoff tells Bustle. "Now I worry about my safety a lot, I worry about the safety of the people around me, am I going to be able to do the same thing if I was confronted by a similar situation again?"

Survivors, along with first-responders, families, and even just people following the story closely, can have lasting mental health impacts, according to Brymer. Especially around a one-year mark like Parkland's, she says, it's important to provide strong support networks to those directly — and peripherally — affected.