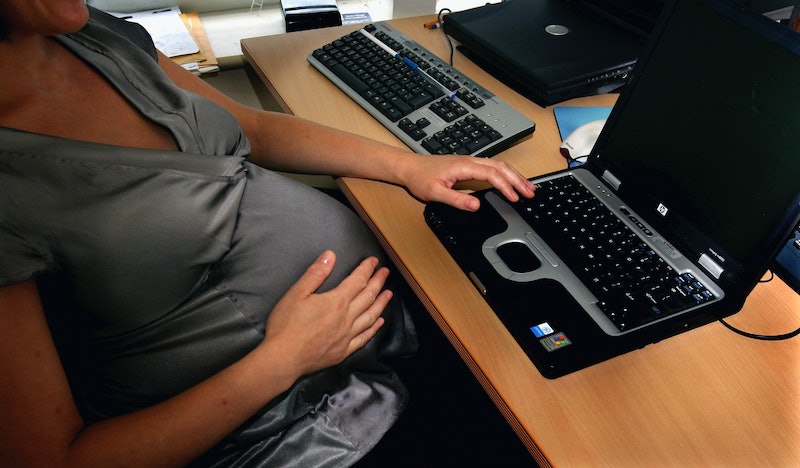 After President Donald Trump won the election in November, opponents questioned whether his policies would help or hurt women in the workplace. More than a decade ago, Trump made a comment that pregnancy is inconvenient for employers, so it's difficult to trust that he has women's best intentions in mind. Luckily, however Trump decides to handle women's rights in the workplace, states are taking it upon themselves to protect and enforce them. On Wednesday, the Massachusetts House of Representatives passed a bill that would give pregnant women special workplace accommodation.

According to The Boston Globe, these protections include the ability to take breaks more often, assume less strenuous duties, and sit down while working. The bill is known as the Pregnant Workers Fairness Act. It was passed unanimously in the House 149-0 and is expected to pass in the Senate and be signed by Gov. Charlie Baker. So far, 19 other states and several additional localities have passed similar pregnant worker protections.

Right now, the main federal pregnancy protection law is the Pregnancy Discrimination Act, which prevents employers from firing pregnant workers or not hiring them because of their pregnancy. Unfortunately, it's not a terribly comprehensive law, mostly because it doesn't require employers to provide accommodation to pregnant workers. It mainly just means that women can keep their jobs, however strenuous they may be on their pregnancy.

According to The Globe, the Americans with Disability Act covers some aspects of pregnancy, such as health problems that arise like gestational diabetes, but not the restrictions of a healthy pregnancy, like the inability to lift heavy loads. Therefore, women are sometimes stuck trying to perform their full normal duties, even when pregnant, because they fear punishment.

Under the Pregnancy Discrimination Act, however, pregnant women would receive accommodation as long as they are able to perform the essential functions of their job.

With 75 percent of working women likely to become pregnant at some point in their lives, according to the American Association of University Women, the bill is an important step in the right direction to protect women's rights. If women are afraid to ask for help or accommodation because they think they might be punished for it, it's not good for the women's health or the company's productivity. When women are supported, companies thrive.

Hopefully, this push from states to step up for women is just the beginning, and the momentum can go to the national level. Whether Congress would be able to pass a similar bill is unknown, but it's important that we continue to push for progress.