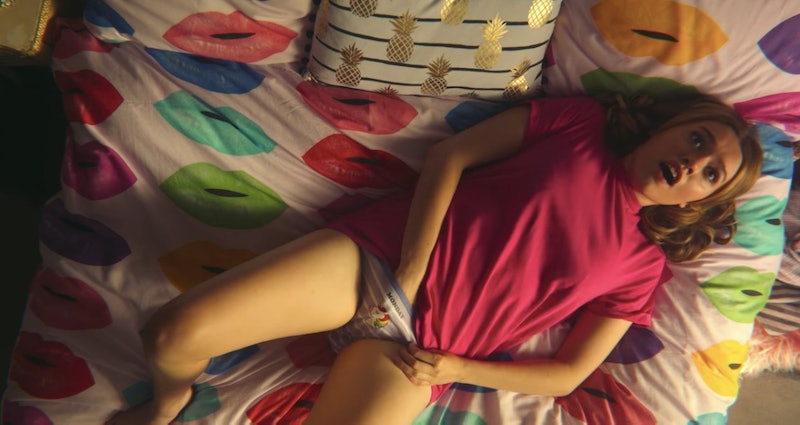 I started masturbating when I was really young, but I never talked about it with my friends. (Minus that one time during my freshman year of high school when my mom offered to buy me and my best friend vibrators. But I’m pretty sure I blacked out from embarrassment, so that doesn’t count.) Even when my best friend and I went to buy vibrators together when we were old enough to do it ourselves, we didn’t talk about what they would be used for. When asked why she thought that might be, my BFF told me, "It was just less of a topic of open discussion 20 years ago."

So, here's what I'm proposing: Let's pick one phrase to use from here on out. And that phrase is actually one that’s already in use: rub one out. In fact, Montell says that it was "originally a penis-referencing term," that may have been "derived from the terms 'rubbing a nut' or 'rubbing the rod.'"

Doesn’t 'I just rubbed one out' or 'I was so turned on after watching Normal People that I had to rub one out' sound more fun than 'I just masturbated'?

So, people are getting off in lots of different ways. But the majority of the time? Most of us are rubbing one out.

And that's why I think "rub one out" could be a winner. (Doesn’t “I just rubbed one out” or “I was so turned on after watching Normal People that I had to rub one out” sound more fun than “I just masturbated”?) It’s quippy, casual, fun — and gender-neutral! Even though it's a term that was originally used by and for people with penises, we can expand it to include all bodies, genders, and sexualities.

So, pass it on. Make some memes. Get crafty and create a poster and give one to all of your friends. Get your favorite influencer involved and shout it from the rooftops. It's the 21st century. It's way past time for all of us to be (talking about) rubbing one out.

Amanda Montell, linguist and author, Wordslut: A Feminist Guide to Taking Back the English Language