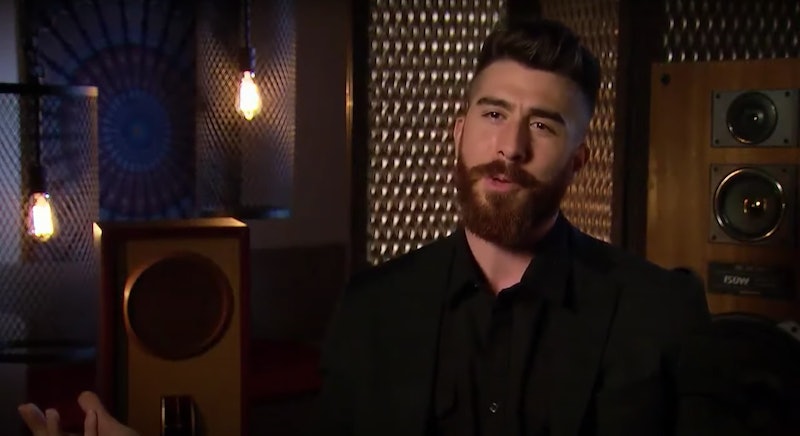 Get your earbuds ready, Bachelor nation, because this time around, it's all about the music. The newest spinoff series, The Bachelor Presents: Listen To Your Heart, will bring together 20 single musicians to bond and connect through song. Every contestant has some musical skill to offer, and here's what you need to know about Listen To Your Heart star Matt Ranaudo, a "Neo Soul" singer from Encino, California.

So, what even is The Bachelor Presents: Listen To Your Heart? The new spin-off series is described by host Chris Harrison as, "Bachelor In Paradise meets A Star is Born," as per E! News. Harrison promised the show, during which contestants will date for six weeks, would feel familiar to fans, but also, "has this kind of eccentric musical twist to it that feels really good, so it's kind of the best of both worlds." The longtime host was also sure to reassure fans that the show was not inspired by Jed Wyatt, the country-singer from Hannah Brown's season of The Bachelorette who confessed to being on the show to further his music career.

For anyone who is missing The Bachelor franchise amid the filming suspensions caused by the coronavirus pandemic, this show might just help fill the void. Before tuning in, be sure to get to know the contestants, including Matt Ranaudo.

Matt was inspired to pursue a career in music after, "watching his father tour the country as a musician," according to his cast bio. He currently co-leads his band, Brother Stone & the Getdown with his cousin, and writes music for TV Shows, commercials, and other artists as a day job. Unfortunately for the singer, "being laser-focused on his music has meant sacrificing a love life." By being on the show he's hoping to fond a woman he can, "share his life and dreams with, on and off the tour bus."

What Kind Of Music Does Matt Make?

A self-proclaimed "neo-soul" musician, Matt appears to be both a singer and songwriter. In fact, Matt has been playing music since he was 3-years old, as per ABC. It's clear that he's an experienced performer, and his band does plenty of covers, including of Player's "Baby Come Back" and the Bee Gees' "How Deep Is Your Love."

Matt's social media account doesn't have any red flags — in fact, his posts seem pretty standard for a musician-turned-reality star. He's posted plenty of videos and photos of his band, adorable throwback photos of playing music as a kid, and plenty of photoshoots. However, his romantic life seems notably absent from the account, which suggests he hasn't prioritized relationships in recent years.

He Might Not Be Uh, Super Familiar With The Show

Matt doesn't seem to know too much about what he's getting himself into. During his walk-up to the mansion, he didn't seem to recognize who the host, Chris Harrison, even was. "I've never seen The Bachelor, but I recognize that guy," Matt said. "What's his name, Chris Hansen?"

Is Matt There For "The Right Reasons?"

One benefit of having all the contestants be musicians is that nobody on Bachelor Presents: Listen To Your Heart has to pretend to put career interests aside. These reality stars are looking for love - and to find a bigger platform for their music. Matt, who is 32, does seem genuinely interested in exploring a relationship, having put his love-life on hold for years to work on his music. But it does seem like Matt might have some issues with commitment, as the musician bragged that his "longest relationship has been with his beard: seven years strong," as per ABC.

It's going to be a bumpy ride.