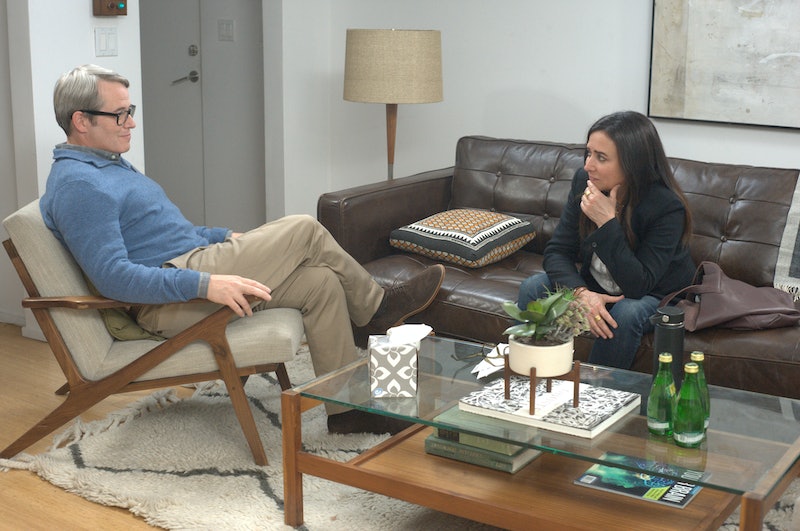 Spoilers ahead for Better Things Season 3, Episode 6, "What Is Jeopardy?" Sam is finally going to therapy on Better Things, but upon arriving at her first session, she discovers that her doctor is an old flame. Matthew Broderick's Better Things character is Dr. David Miller — or Deezy, as they used to call him, and it's clear that their chemistry never really went away. But while they spend a few minutes reminiscing, it's clear that Sam has real issues she needs to talk through.

After David sings an uncomfortably long camp song, Sam finally realizes who he is — they had a fling back at camp, where they would sneak off behind the infirmary. Sam reiterates that she was on the Red Team, to which he replies, "Yeah, and you wore that Led Zeppelin shirt with the sleeves cut off for that whole week! You were so cute! God, you killed me." But however palpable their chemistry might be, Sam isn't there just to flirt with her psychiatrist. Furthermore, it would be entirely unethical for them to have a relationship, so if they do decide to date, hopefully David will refer Sam to another therapist.

Whatever will or won't happen between the two of them, Sam is dealing with some serious stress, as we saw in last week's episode. Not only are her daughters spending seemingly all of her money on Postmates deliveries and Uber rides, but she keeps having dreams about her ex-husband raping her. When David asks Sam what she'd say to her ex-husband if he were here, she replies, "Why didn't you drown in a puddle of diarrhea yet?"

We don't know a whole lot about what happened between Sam and Xander (Matthew Glave), but whatever happened, it wasn't pleasant. In this episode, when Frankie says that Sam never told them why they got divorced, Phil quickly changes the subject. "How long since the divorce?" David questions Sam during their session. "Oh, it's been like 4 or 500 years," she answers, sarcastically. "So was it an amicable split?" he asks. Sam, however, says that she doesn't want to get into it.

And while she claims not to have any "residual feelings" for Xander, she still calls him right after leaving David's office, telling him about her dreams. They agree to meet up for one last hurrah, and although Xander's excited by the prospect, she becomes sick to her stomach (literally). He asks her to bring a certain pair of boots and underwear, implying that they've done this before. Their ensuing encounter involves her posing on the bed in her boots and underwear while he masturbates in a corner.

While Sam has had other relationships since her divorce, none of them have stuck. Like we saw with Robin (Henry Thomas) in Season 2, the mother of three is scared of commitment. That said, Sam may choose to remain single, which is entirely her prerogative. After all, we've seen how busy she is, between her family and work, so throwing a serious relationship into the mix may be too much to handle. That said, it seems like she's still reeling from her traumatic divorce, and if she can learn to move past it in therapy, Sam will be all the better for it.

So whether or not this really is the last time that Sam and Xander will share a kinky encounter, she seems pretty adamant that this is it for her. Not only does she shove her light blue underwear into his hands, but she throw her absolutely gorgeous boots into the trash on her way out the door. Perhaps Sam is finally moving onto better things.