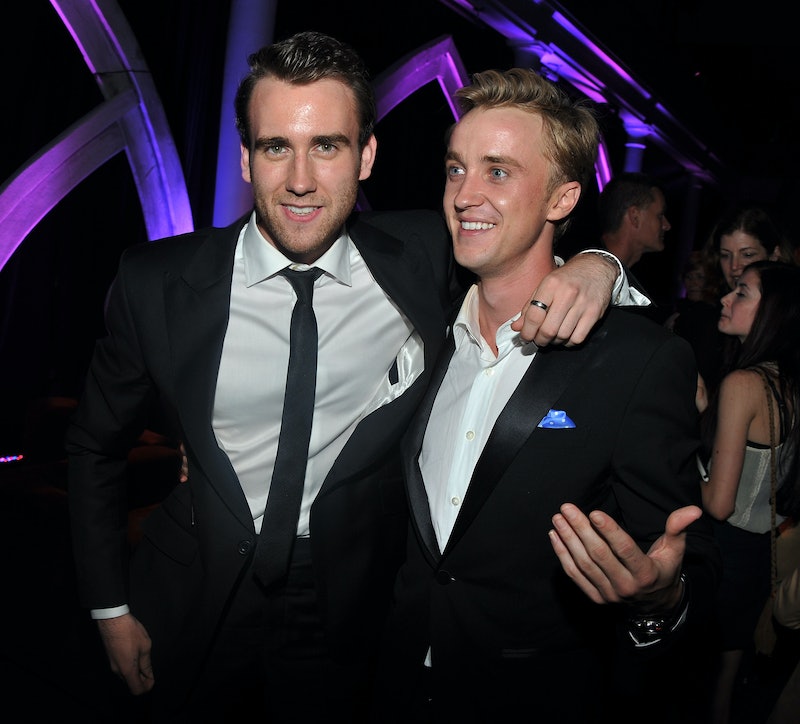 Is there a movie star friendship I'm more invested in than that of the Harry Potter cast? I refuse to accept it's only me who experiences pure, unadulterated joy any time any of the cast members reunite — and today's been a pretty solid supplier of joy. Matthew Lewis and Tom Felton just Instagrammed two snaps of themselves hanging out; yes, that's Neville Longbottom and Draco Malfoy in two adorable photos, Potterheads! And they're no regular snaps, either — there's layers to Matthew Lewis and Tom Felton's Harry Potter reunion, and those layers will delight you.

Let's inspect Felton's, shall we? Felton's semi-embracing Lewis, but Lewis looks less than thrilled about it. Could that have something to do with the green Slytherin backpack Mr Malfoy's pressing against proud Gryffindor Neville's chest? The caption would suggest so: "See how close he was to converting," Felton wrote. It's good to know that even offscreen, the actors take their Hogwarts house loyalty seriously, seven years since the final Harry Potter film hit cinemas. (Try not to think about how much you've aged, or the terrible brevity of youth.) And it's also good to know that Tom Felton is in possession of the latest and greatest Harry Potter merch; I very much hope he carries that Slytherin backpack everywhere.

Then there's Lewis' very similar photo, accompanied by the caption: "Take your Slytherin paws off me, you damn dirty ape!" Planet of the Apes fans will recognise Lewis' play on one of the most famous phrases of the franchise: "Take your stinking paws off me, you damned dirty ape!" In the original 1968 movie, it's uttered by protagonist George Taylor, played by Charlton Heston — but in the 2011 reboot, Rise of the Planet of the Apes, it's spoken by malevolent facility guard Dodge Landon, played by Tom Felton himself. What does Matthew Lewis' caption suggest? That he's a good friend of Tom Felton and closely follows and supports his post-Potter acting career, of course! What did I tell you about levels?

This isn't the only Harry Potter reunion of the year: back in April, Lewis and Felton met up with Emma Watson, the woman behind the only film character my parents have ever compared me to (yes, it was young Hermione Granger, and yes, it was during the "or worse, expelled" scene). Felton posted a snap to his Instagram of the trio beaming, arms around each other, with the caption, "School mates #hogwartsalumni".

And yet another former castmember popped up in the comments: Malfoy patriarch Lucius Malfoy, better known to Muggles as Jason Isaacs (obligatory "hello to Jason Isaacs"). Did he offer another disparaging comment to his failed Death Eater son, now hanging out unabashedly with a bunch of Gryffindors? Quite the opposite: as Marie Claire reports, Isaacs instead complimented their teeth. "It’s like the front cover of Orthodontist Monthly," Isaacs wrote. I mean, those teeth really are glowing.

It's been a busy few years for all three former Potter stars. Matthew Lewis just appeared in Terminal, alongside Margot Robbie; Tom Felton's got a YouTube Originals series coming out called Origins (and yes, that's Natalie Tena/Tonks alongside him on the poster); and Emma Watson starred in last year's Beauty and the Beast as well as The Circle (plus, she's continuing her feminist activism with the "Time's Up" movement). It's thoroughly endearing to see, therefore, that the Harry Potter cast are still making time to hang out. Hogwarts forever!