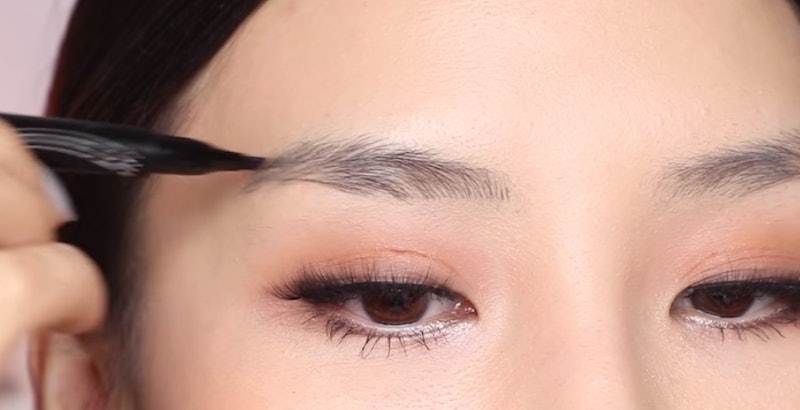 The beauty world offers up all types of eyebrow pencils — from soft kohl pencils, to gel pots, to powder pans — but Maybelline is bringing a new format onto shelves, and it might just be the most innovative one yet. Maybelline's Tattoo Brow Ink Pen is riding on the microbladed eyebrow trend that has people cleaning up their brows and changing the shape of their arches, and promises to deliver a similar effect. For those who haven't been able to try out microblading because of budget concerns, this is a pretty cool (and affordable!) workaround.

If you're not the most patient when it comes to feathering on tiny brow hairs across your arches, this new product will help you perfect your brows in half the time. The felt tip pen doesn't have just one tip but rather a micro-fork applicator that looks like a — you guessed it — a tiny fork. Meaning you have four tips that draw on four lines at once, and they are meant to come out looking like "hair-like strokes" that help create a natural looking brow. The formula is also smudge-proof and long lasting, meaning your brows will look polished and well-defined throughout the day.

But does it actually work? We've all been burned with a product that looks great on paper but falls apart once it's time to use it, so innovative products like this one are sometimes approached with caution. Luckily for us, YouTube beauty vloggers have already tried it and have the inside story. One vlogger that tested it out was Tina Yong on her segment "Tina Tries It."

As Yong explained, the pen comes in three shades: natural brown, red brown, and grey brown. As she tested the pens on her hand, she did notice that the formula is a little bit runny and bleeds out on the hand.

But once she first started feathering them on she was pleasantly surprised with how natural the hairs looked.

To give you an idea how her brows looked before and after the brow pen, here is a screen grab of one arch finished and the other still makeup-free. As you can see, there is a noticeable difference, and the filled-in brow does still look natural and has a hair stroke effect.

When she finished both borws she gave her final opinion, and she was pleased to note that the product didn't bleed the way it did on her hand, and was pretty budge-proof if not 100 percent smudge-proof. She noted that the press release said that it was supposed to last up to 24 hours, but when Yong tested that claim she did find that it noticeably disappeared off of her brows at the end of the day.

She has oily/combination skin, and after around six hours she found that the strokes had blurred a bit to create a block of color, losing their definition. But she still liked the look of her brows, and enjoyed that it still looked natural. She suggested maybe setting it with powder or brow shadow to keep the ink lasting longer.

There is one catch to this product, though. As both Revelist and Yong pointed out, right now this brow pen is only available in Singapore, but it might expand to other markets later. As of right now it retails for $17.90 in Singapore, which would make it cost around $13.50 in the US.

In the meantime, though, there are similar products you can practice with until this one comes to the States. For example, L'Oreal released their "Micro Tattoo Eyebrow Definer" for $14, which has the same forked applicator, and Etude House also made a four-tipped marker for $9.50. While they don't feature the same formula as this Maybelline one, it's a great way to practice and see if you like the ink option!