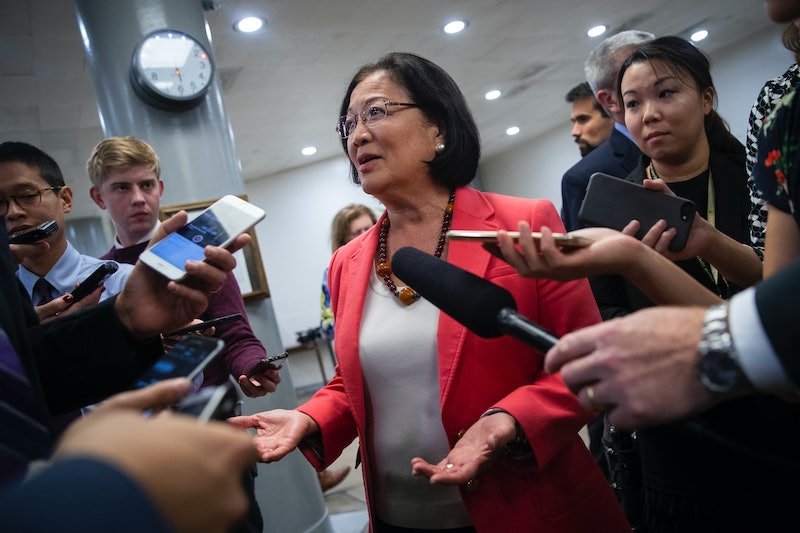 During South by Southwest (SXSW) events in Texas over the weekend, many politicians took to the stage to reflect on their experiences during the Trump administration — and to share their visions for the future. In fact, Hawaii Senator Mazie Hirono's SXSW interview explained why she's so inspired to speak up right now, emphasizing that the president's actions have emboldened her to take a more public stance on issues.

Hirono shared her thoughts with Politico’s Jake Sherman and Anna Palmer during an event at the annual conference in Austin. During the interview, Palmer asked Hirono why she has recently decided to speak more with the media on Capitol Hill, despite not really engaging much with the national press in the past. In response, the senator from Hawaii emphasized that she believes it's important to take a stand against Trump. As Hirono put it (via Politico):

Let's face it, this president and this administration give me a lot of reasons to be vocal and visible. And I think it’s really important at a time like this for people to see a face like mine, which is obviously a minority face ... I think it’s really important for people in our country to understand that when minorities are attacked, as this president does on a daily basis, that I should speak up.

Hirono also told Sherman and Palmer that she's become more comfortable speaking in an unguarded manner — and that's drawn some ire from the president. "I've also had the journey of becoming a lot more plain ... when I speak," she said. She noted during the interview that her forthright comments have prompted Trump to call her "this crazy senator from Hawaii."

The senator then further explained one scenario that prompted criticism from Trump. "He was objecting to something I said about men in our country. He [Trump] said, 'she said something really bad about men.' Do you know I said about men?" Hirono asked Sherman and Palmer. "What I said was ... I was asked by a reporter [during the Kavanaugh hearings], 'Do you four women on the [Judiciary] Committee have a special responsibility on the issue of sexual harassment and sexual assault? I said, 'Why should it just be the women on this committee?'"

Hirono noted that, because men have largely perpetuated the sexual assault and harassment issues in the United Sates, she believes they need to take a stand against it as well. "And I just want to say to the men in this country, just shut up and step up," she said during her aforementioned interview with the reporter, The Hill revealed. She told Sherman and Palmer that "the president really objected to that."

However, Hirono said she has found some humor in Trump's critiques — and emphasized that she thinks he may not be addressing her by name when he criticizes her for a surprising reason. "This is the second time he’s referred to me as ‘that crazy female senator from Hawaii,’” she said to Sherman and Palmer. “And I’ve decided that the reason he doesn't say my name is because he can’t figure out how to pronounce it and he doesn't want to look foolish in front of his adoring audience.”