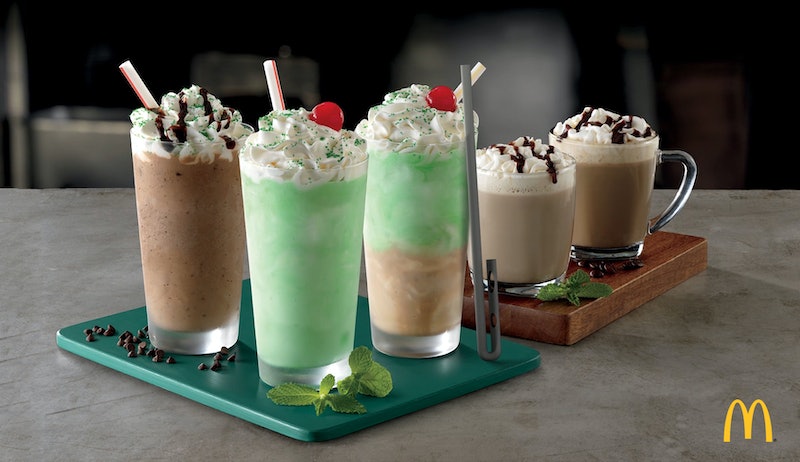 The first two months of 2019 have flown by, and March is only a couple weeks away. This means that spring will soon be starting, sunnier weather will hopefully be upon us, and (perhaps most importantly) St. Patrick's Day is almost here. Spring's most fun day of festivities brings a lot to the table: you get to deck out in all green, go to rowdy events with friends, and get your hands on one of the most highly coveted seasonal drinks of the year: a McDonald's Shamrock Shake. That's right — per Food & Wine, the minty frozen treat has been spotted at McDonald's locations in 2019.

Shamrock Shakes are pretty much one-of-a-kind, with their creamy vanilla soft serve blended with McDonald's signature green Shamrock syrup and topped off with a hefty dollop of whipped cream. Originally introduced in 1970, the specialty milkshake has become a wildly popular fan-favorite over the decades — and for good reason, too. (I'm already programmed to associate the beginning of March with a craving for the refreshing treat).

There isn't one single official release date that'll tell you when Shamrock Shakes have hit every single McDonald's location in the country, but the company has made it super easy to find out where the shake is being served near you with a Shamrock Shake tracker. All you have to do is enter your zip code, and voila — you'll see every participating location that has the beloved milkshakes in stock, complete with a map and detailed information on how far away each one is from you. Ah, the joys of modern technology.

So thanks to McDonald's, you won't have to drive around your entire city trying to find a spot that has Shamrock Shakes on the menu. You can also access the tracking feature on the McDonald's app if you don't want to head to the website each time you want to check. (This is the first time ever that the company has introduced this feature, so make sure you take full advantage of it.) If you can't seem to find one near your area, don't fear: the item will be on McDonald's menus until March 24, so you're sure to get your hands on one at least by the end of the month.

Ever found yourself wondering how the iconic shake came to be? When it first came out in the '70s, McDonald's marketed it as the St. Patrick's Day shake — but changed up the name to what is is today after realizing that the original was a tad too long. The treat wasn't even available nationally until 2012 (that's right, it took 42 years for them to realize that people everywhere wanted a taste), but the company finally got them in stock in nearly every single one of McDonald's 14,000 locations across the country. Since their debut almost half a century ago, 60 million Shamrock Shakes have been sold. People really love their minty ice cream decadencies.

Treat yourself as March approaches with a Shamrock Shake and enjoy all that St. Patrick's Day — and McDonald's — has to offer.