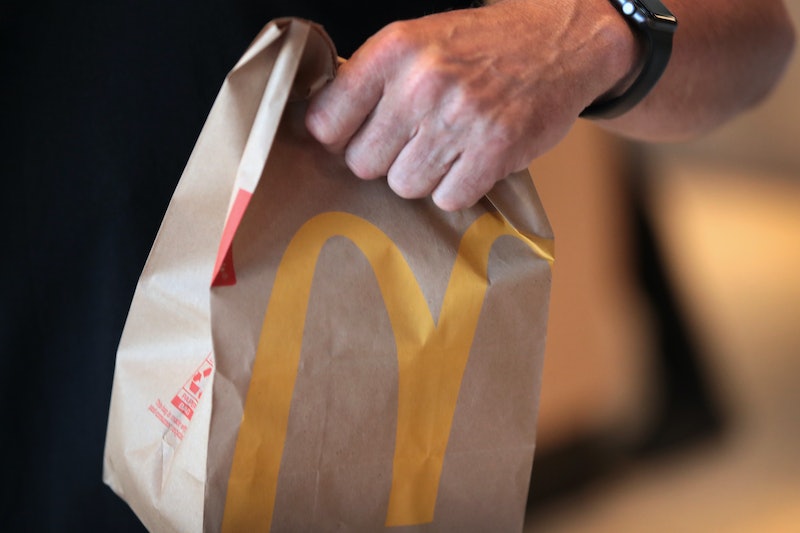 In some disconcerting news out of the Midwest, McDonald's salads are being investigated after over 100 people in Illinois and Iowa became ill due to a parasite, Cyclospora, that may be linked to the salads. As People reports, the intestinal illness is called Cyclosporiasis and symptoms include diarrhea, fatigue, and nausea. The illness is spread via contaminated food and water. Bustle reached out to McDonald's, and will update this post upon response.

The fast food chain told People in a statement:

Out of an abundance of caution, we decided to voluntarily stop selling salads at impacted restaurants until we can switch to another lettuce blend supplier. We are in the process of removing existing salad blend from identified restaurants and distribution centers — which includes approximately 3,000 of our U.S. restaurants primarily located in the Midwest. McDonald’s is committed to the highest standards of food safety and quality control. We are closely monitoring this situation and cooperating with state and federal public health authorities as they further investigate.

According to CNN, 90 cases of Cyclospora infection were reported in Illinois since the middle of May, and Iowa has reported 15 since late June. In a July 12 statement on the Iowa Department of Public Health website, Dr. Patricia Quinlisk said, "This summer there have been several clusters of Cyclospora illness associated with various foods that are commercially available. This week IDPH has identified 15 Iowans who ate McDonald's salads in late June to early July prior to getting ill."

The Illinois Department of Public Health shared a similar statement on its website, also on July 12, and notes that "approximately one-fourth of Illinois cases reported eating salads from McDonald’s in the days before they became ill." The announcement also states that McDonald's is fully cooporating with investigations from the state health departments, the Food and Drug Administration, and the Centers for Disease Control and Prevention.

A Cyclosporiasis outbreak is also currently linked to produce brand Del Monte and lead the company to recall certain vegetable trays in June. The FDA released information about the Del Monte recall, including which items exactly were affected. This recall also affected the Midwest, including six states: Wisconsin, Iowa, Indiana, Michigan, Illinois, and Minnesota. Four of the states — Iowa, Wisconsin, Michigan, and Minnesota — had confirmed cases of Cyclosporiasis, which affected over 200 people. (CNN reports, though, that in the two cases in Michigan, the vegetables were purchased in Wisconsin.) Bustle reached out to Del Monte for comment, and will update this post upon response.

As for the symptoms of a Cyclospora infection, FDA and state health department explain that the most common is frequent watery diarrhea, including sometimes explosive bowel movements. Other symptoms include fatigue, loss of appetite, weight loss, nausea, bloating, cramping, and increased gas. Those infected can also experience other flu-like symptoms, like headaches, body aches, fever, and vomiting. On the other hand, you can be infected and not show any symptoms. If the infection goes untreated, it can last a few days to a month longer. The symptoms can also seemingly go away, but then return.

Dr. Quinlisk from the Iowa Department of Public Health said in her statement that anyone who ate the McDonald's salads since the middle of June and developed symptoms, specifically diarrhea, should see a healthcare provider and get tested for Cyclospora. In their information about the Del Monte recall, the FDA says that a healthcare provider should be contacted if you have diarrhea that lasts for more than three days. Further information, including that about treatment, can also be found on the the CDC website.