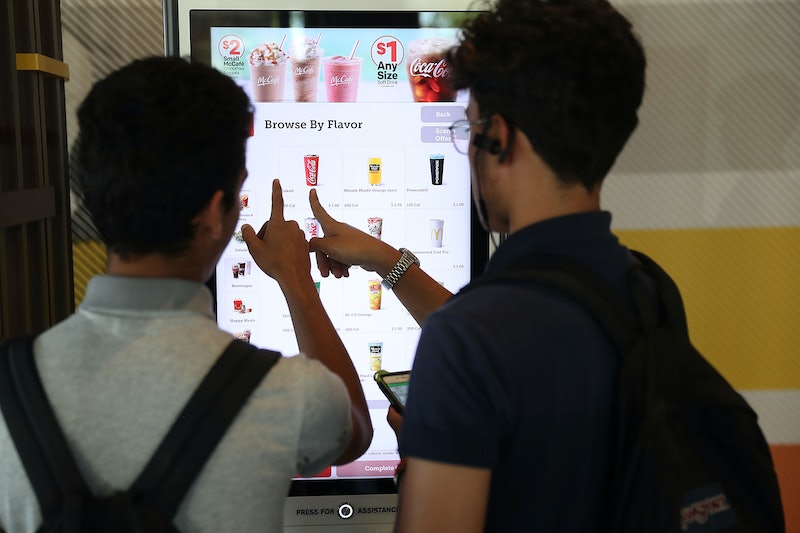 Is it just me, or are people a little on edge about robots these days? Thanks to a surge in auto-technology and artificial intelligence, we’re hearing more murmurs of robot technology becoming more and more integrated in our daily lives. But some are insisting that robots hold the key to heightened business efficiency, and are using regimented industries like fast food restaurants as a case study. For instance: A recent move by McDonald’s means you’ll be able to have it your way even faster, as it was announced Wednesday that McDonald's will install automated ordering kiosks in 2,500 stores by the year's end. These kiosks will allow customers to place their order on a digital touch screen, then receive their order by table service via a McDonald's employee. It really is the future!

In addition to adding digital ordering kiosks, McDonald’s also plans to implement mobile ordering in 14,000 stores across the U.S. by the end of 2017. During a press event in New York in 2016, McDonald's CEO Steve Easterbrook said that the company's move was just another way they were dedicating themselves to "putting more choice and control in the hands of customers."

According to Andrew Charles from the financial firm Cowen in a note to clients on Tuesday — published on CNBC — the change is being called the “Experience of the Future.” The shift will include digital ordering kiosks with subsequent table delivery. In 2016, Fortune highlighted the company's move to include digital ordering kiosks as part of their customer experience, stating that it allowed customers to order on a touch screen, then, after they picked up a number with a digital locator, be served at a table by an employee.

It seems likely McDonald's move is indicative that the trend of businesses moving toward automated systems has officially begun.

Correction: An earlier version of this article stated that McDonald's would be replacing cashiers with automated ordering kiosks. Instead, the kiosks will allow back-of-the-house positions to transition into more customer service-based roles, and the kiosks will not be a labor replacement, according to a McDonald's spokesperson.

More like this
I Tried The $20 TikTok Viral Oishii Strawberries — Here's What I Thought
By Sophie Hanson
Trust Me, Pickle Martinis Are The New It Drink Of The Season
By Emma Carey
On TikTok, A ‘Snackle Box’ Is The Best Way To Pack Charcuterie On-The-Go
By Meguire Hennes
13 Selfie Instagram Caption Ideas That Exude Main Character Energy
By Jessica Booth and Emma Carey
Get Even More From Bustle — Sign Up For The Newsletter