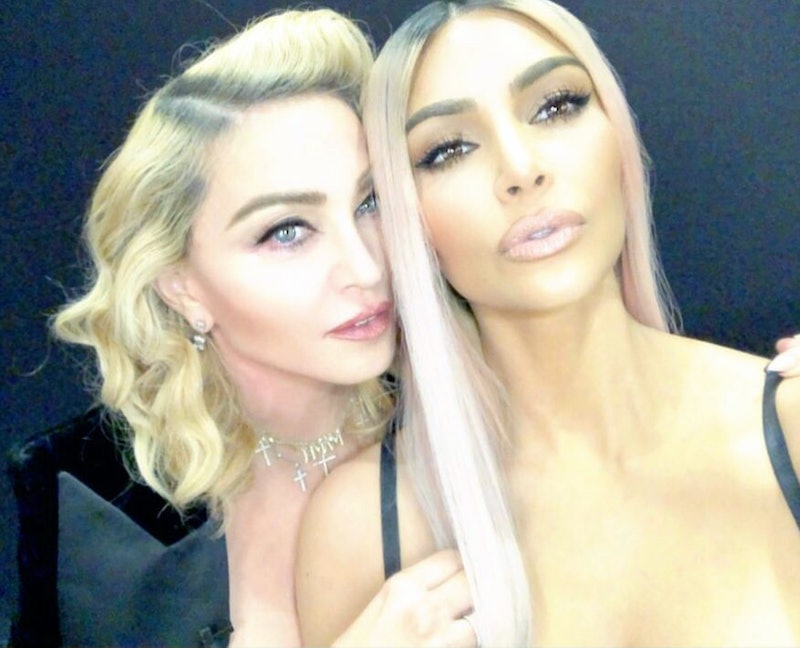 While it might not seem obvious at first, Madonna and Kim Kardashian actually have more in common than you think. They are both icons, famous for reinventing themselves, time and time again. They have an affinity for diamonds and provocative fashion statements. They have built empires from their personal brands to become even more famous and successful than they already are, and at one point, they were even neighbors, living next door to one another. But what really bonds the two together is their obsession with skin care and beauty. That's exactly what the two revealed during an intimate conversation, moderated by Kandee Johnson, on Tuesday night, at the YouTube Space in Los Angeles.

Madonna and Kardashian joined forces to celebrate the launch of the newest MDNA Skin product, The Reinvention Cream. Kardashian expressed how big of a fan she was of Madonna's products, especially the MDNA Skin serum and the MDNA Skin Rose Mist, which she used in lieu of her typical moisturizer after Madonna's Oscars after-party where she said she stayed out way past her bedtime.

"I am a moisturizer freak and it was so moisturizing and I just used [those two products] and got up the next morning and left [to bring the kids to school]," Kardashian shared to prove just how nourishing the MDNA products are. "It's all about hydration," Madonna chimed in. "I'm obsessed with spraying water on me. I feel like when I spray water on me, I have energy." The two would spend the next 30 minutes occasionally spraying their faces and their chests with the MDNA Skin Rose Mist between stories.

Madonna, like Kardashian, has always been obsessed with keeping her skin hydrated, which was one of the reasons she decided to launch her own skin care line. In fact, the hero ingredient in MDNA Skin's products is a thermal water from a town in Tuscany called Montecatini.

"We discovered these thermal waters — you can't find them anywhere in the world, the spa has been around for thousands of years, I'm sure Roman emperors went there — but it's been a place that has attracted everyone from movie stars to scientists to political leaders to high-profile people, and it's been around forever and people go there for every kind of treatment from eczema, psoriasis, arthritis — it's kind of one of those cure-alls," she told the audience.

"I went there and I experienced them also and I said, how can we make it so that no one else can have these waters?" Madonna said, laughing. Now, MDNA owns a patent that prevents any one else from using the water in beauty products. "These thermal waters, which I call the golden waters of beauty, are only in this skin care line," Madonna said, as she and Kardashian misted themselves again with her Rose Water spray.

In addition to staying hydrated, the most important skin care advice Madonna follows is staying out of the sun.

"For me, it was about Hollywood glamour, women like Marilyn Monroe and Marlene Dietrich and Rita Hayworth, obviously, I've said all their names in my song 'Vogue.' They were the personification of beauty to me. They all look like they took really good care of their skin — I'm not sure what it looked like in real life, but I don't think any of them were sunbathers," Madonna remarked. "Those women were my role models in terms of skin care, but I grew up in the Midwest and sunbathing was not part of the culture there, so I avoided that. I also never smoked. I feel like those two things before I could afford skin care saved me."

When it comes to skin care advice for Kardashian, she mostly learned tips from her mom, Kris Jenner, who taught her the importance of washing her face with a hot washcloth, something Madonna also believes in.

"It is all about the hot washcloth — two actually. One hotter than the next. So you can just burn off your face," Madonna joked.

When Kandee Johnson asked Kardashian what her best beauty advice is, the beauty mogul was not shy to admit that she is quite the expert, especially when it comes to cosmetic treatments.

"People always come to me [for advice.] I love analyzing someone's face and going with them to a doctor and being like, 'Wait, a little Botox here...' That kind of advice. That's what I love to do," Kardashian explains. "People write me, I will not say who, but some people in the business, people that I have never met before, will text me and say, 'Hey, this is so and so, I hear you give the best advice. Can you look at my pictures and tell me what you think I should do?"

"And a huge liability," Kardashian laughed.

Another thing both Madonna and Kardashian are huge on — good lighting and great angles.

"Daylighting — I should just never go out in the day light. It's so bad," Kardashian said, shaking her head. While it sounds silly, she is actually very serious about this — she recently advised followers on her app to "stand in dim lighting" to feel more confident in your skin.

"I think people should just be more thoughtful and have really good lights on their phone, all the time," added Madonna. "And always take pictures from the front. Why the side? And below, so we're tall. Be generous people, be thoughtful."

Should you strive to follow in the footsteps of these beauty legends, remember to moisturize and always find the good lighting.