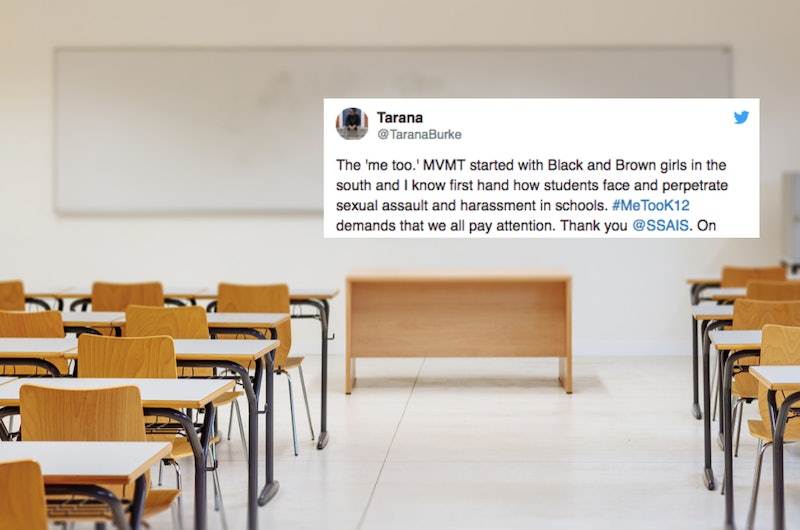 The first time I got called a whore, I was 11. I heard it from the older boys at my middle school, who would corner me at my locker and wouldn’t move until I let them touch my butt or my chest. I thought I was the only one who had experienced this kind of harassment, until I woke up on Friday morning to a Twitter feed flooded with #MeTooK12, and people sharing stories almost identical to my own.

The campaign was created by “Stop Sexual Assault in Schools” (SSAIS), an organization that works to combat sexual assault and harassment in schools. The hashtag, which started gaining traction on Jan. 3 but officially launched on Jan. 9, is meant to shed light on sexual assault in schools, a subject that has long been swept under the rug. According to a 2017 investigation from the Associated Press, there were 17,000 reports of sexual assaults committed by elementary, middle, and high school students against classmates between the fall of 2011 and spring of 2015. Unwanted fondling, like what happened to me, was reported by the AP to be the most common type of harassment, but nearly one in five of the students assaulted were reportedly raped, sodomized, or penetrated with an object. It’s been a decade and a half since my middle school experience, but this culture of hallway violence is still alive and well.

“I feel like the #MeTooK12 movement is bringing light to this important and overlooked issue,” Chrissie Kahan, an award-winning educator and anti-bullying advocate, tells Bustle via email. “Often, we only focus on the bullying statistics in schools, failing to highlight the sexual harassment component that exists within the overarching bullying label.”

Seventh grade me, who was terrified to walk to her locker, didn’t know what to do or who to tell, because I felt like the whole thing was my fault. As if that wasn’t bad enough, the more harassment I got from the boys — regardless of the fact that I didn’t want it, wasn’t asking for it, and didn’t know how to stop it — the more vicious many of the girls in my class, who had once been my friends, became. Some started calling me a whore, too, and I started to believe them.

According to Kahan, this sort of self-blaming is a common occurrence among victims of harassment. “Victims experience the tendency to blame themselves which leads to shame followed by then denying the harassment happened followed by minimization,” she tells Bustle. “They downplay the interaction in order to acknowledge how much they were harmed by sexual harassment. There [is] also fear of the consequences that causes victims to be reluctant to report it [...] Feelings of hopelessness, low self-esteem and helplessness also play a part in this.”

After someone wrote a violent threat inside of my locker, I finally went to the school’s administration and told them what was going on. To avoid the harassment, I ended up moving to a new school in the middle of 7th grade (where people were still brutal — because middle school — but at least they didn’t touch me), and spent years dealing with anxiety, depression and low self-esteem — all of which Kahan cites as side effects of long-term harassment. I went on to graduate high school, and college, and admittedly, I blocked out most of these memories for the better part of the last two decades.

But now, thanks to the frustratingly similar stories shared in solidarity with #MeTooK12, they’ve started to flood back. A scroll down the trending page for the hashtag reveals dozens of young people opening up about experiences similar to mine, which too often end, heartbreakingly, with little recourse for the survivor, and few repercussions for the perpetrators.

And all I can think is: What the f*ck? As a 12-year-old, I was made to believe that the root of the problem was me, not the people who were harassing me. It's the job of educators to protect students from situations like this, but unfortunately, too often they don't have the resources or knowledge to approach this issue with sensitivity. Just as adult women who are survivors of sexual assault often get undue scrutiny should they choose to talk about it, young children are systemically disbelieved by the people who are meant to protect them.

I’d like to think that things have changed in the last decade and a half — that no other young woman was made to feel the way I was, and convinced that the entire thing was her fault. But clearly, as this viral hashtag has shown us, there’s still a lot of work left to be done.

If you want to help, you can retweet tweets with the #MeTooK12 hashtag to give the campaign even more visibility. SSAIS is also calling for people to learn more about Title IX and share that information with changemakers in your community. Making sure the conversation around sexual assault in schools becomes more transparent will be key to eradicating this issue from schools everywhere.

More like this
Scotland's First Period Dignity Officer Is... A Man?
By Darshita Goyal
25 Things I've Reduced My Life To, In Addition To WFH In My PJs
By Ginny Hogan
Beyoncé & Madonna’s “Break My Soul” Remix Honors A Group Of Black Icons
By Stephanie Topacio Long
Your Daily Horoscope For August 17, 2022
By Alexandria Lettman
Get Even More From Bustle — Sign Up For The Newsletter