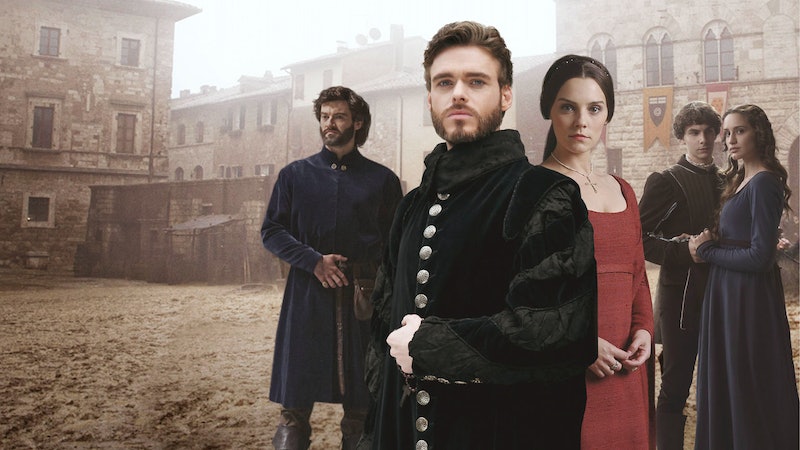 In Medici: Masters of Florence, fans watched Cosimo Medici struggle to balance his vision for Florence, as head of the Florentine Republic, and his empirical bank inheritance from his late father, who was mysteriously poisoned. In Season 2, the story will shift to focus more on Cosimo's grandson, Lorenzo, and their journey to maintain the dignity of their family's legacy. Thankfully, their fight won't have to end after those eight short episodes, because according to The Hollywood Reporter, Medici will return for Season 3.

On Oct. 11, 2018, THR reported that a third season of the show was sold to Netflix and other global networks prior to the Italian airing of Season 2, which occurred on Oct. 23. According to Den of Geek, Season 3 has already been filmed, and will likely air first in Italy before hitting Netflix in early 2020.

Season 2 is set 20 years later than Season 1, in which Lorenzo upends his life to defend his family's name against a group of rival bankers led by antagonist Jacopo Pazzi. “This is a two-season journey,” Medici co-creator Frank Spotnitz told press at the Season 2 launch in January. “This season ends with the Pazzi Conspiracy, which is this massive, thrilling climax, and then the story continues for eight episodes in the next season, which we just completed filming last month in Italy.”

Although it could've been cheaper to film in other parts of Europe, showrunners chose to keep the location authentic, and filmed both of the newer seasons all across Italy — in Florence, Volterra, Pienza, Lazio and Montepulciano, Spotnitz said.

Known for its drastic time changes, the third season will take Lorenzo even further into the future. At 43 years old, per Den of Geek, he begins to realize the necessity for him to use his power and privilege for good.

"In this third season there is of course all the beauty of our country, of Florence, its history, culture and the whole narrative of human complexity, starting from the figure of Lorenzo, who was a real star of his time," CEO of Lux Vide and producer Luca Bernabee told Variety. "We want to tell the story of his being revolutionary, a visionary, and also the modernity of a man who has known how to use beauty as a powerful communication tool.”

Daniel Sharman, who plays Lorenzo, told Den of Geek that the drastic aging of his role required him to undergo two hours of makeup application every day during filming.

“It was one of those mad moments where you look in the mirror and you go, 'Oh God, that’s my future!' There’s something quite harrowing about that, especially the later season towards the end of his life when he was really unwell," he said. "You take that energy on in some way, I’m still kind of recovering a little bit from it.”

Creators cling to the notion that both of the new seasons will shock fans in the end. “You don’t know how the story is going to turn out," Spotnitz told Den of Geek. "You may think you know, that it’s a simple thing of good versus evil and cynicism versus idealism… It’s not that simple at all."