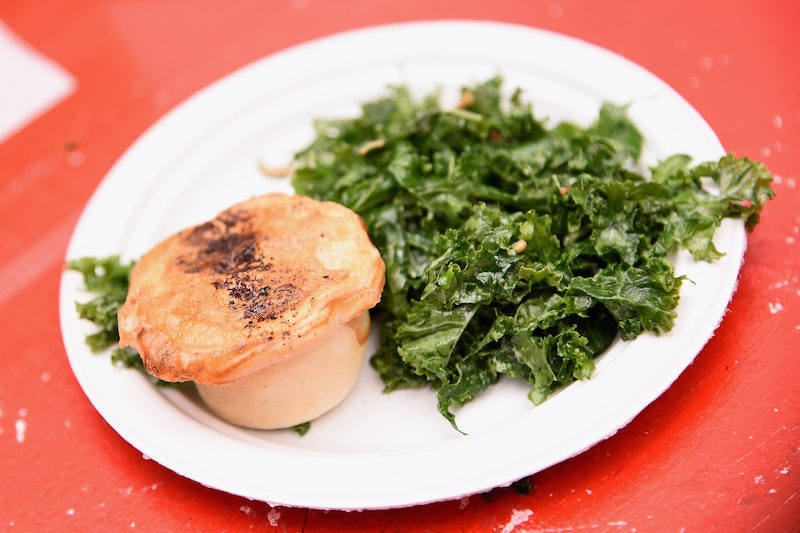 You probably already know that what you eat has an impact on how you feel later in the day, but new research suggests the connection could go way deeper. According to a new study published in Molecular Psychiatry by researchers from University College London, Mediterranean diets are linked to a lower risk of depression, BBC News reports. The researchers found that plant-based diets that include fruits, vegetables, grains, fish, nuts, and olive oil but very little meat or dairy, says BBC News, seem to benefit mood.

"There is compelling evidence to show that there is a relationship between the quality of your diet and your mental health," Camille Lassale, research associate at University College London's department of epidemiology and public health in the UK, told CNN. "This relationship goes beyond the effect of diet on your body size or other aspects of health that can in turn affect your mood."

According to CNN, the researchers analyzed 41 studies and found a link between what people ate and their chances of developing depression. Those who followed a strict Mediterranean diet, says CNN, had a 33 percent lower risk of developing depression than those who didn’t. Those who ate food high inflammatory substances — think processed meats, trans fats, alcohol, that sort of thing — were more likely to develop depression, CNN reports. "A pro-inflammatory diet can induce systemic inflammation, and this can directly increase the risk for depression," Lassale told CNN.

Inflammation is a natural part of the body’s immune response, says The Independent, and it can increase when you’re stressed or when you eat certain foods that are high in trans fats or sugar. But fruits, vegetables, legumes, and nuts are all high in fiber, vitamins, minerals, and antioxidant-dense polyphenols, which can lower your inflammation response, The Independent reports. But, according to The Independent, the researchers admit that these results are only observational and that more research is needed to truly verify their findings.

“The only way to prove whether the links are genuine is to conduct large randomized trials in people at risk of depression,” Professor Naveed Sattar from the University of Glasgow, who was not involved in the study, told The Independent, “such trials would take considerable effort but seem worthwhile to conduct. So far only small trials have been conducted.”

These findings seem like good news for people who experience depression, except that access to fresh fruits and vegetables isn’t always so easy to come by. According to The Guardian, the Centers for Disease Control and Prevention says Americans living in poverty aren’t getting enough fruits and vegetables (7 percent) compared to wealthier Americans (11.4 percent). And those numbers get worse in the poorest U.S. states, says The Guardian, with 2.2 percent of South Dakotans between 18 and 30 getting the recommended servings of fruits and vegetables, and only 5.8 percent of West Virginians getting the recommended servings.

According to researchers, depression affects 300 million people globally, CNN reports. When it comes to this new data, “a heavy dose of caution is needed,” Sattar told CNN, because the study "only looks at observational studies,” but the data does support what science know about food and mental health. At the same time, however, it's important to keep in mind that it's your choice how you feed and care for your body. And, if you're ever in doubt, talk to your doctor about whether a Mediterranean diet is a good choice for you.