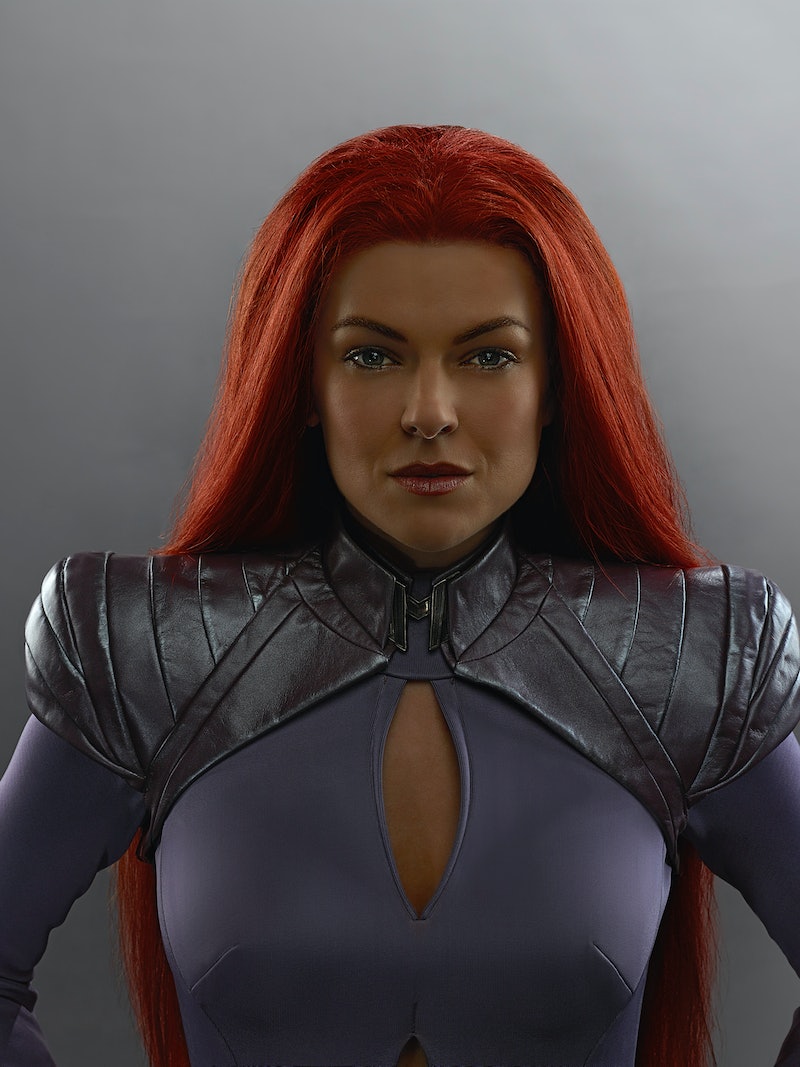 Fans of Agents of S.H.I.E.L.D. are mostly familiar with Inhumans who are just coming into their powers. The royal family that makes up the cast of Marvel's new Inhumans series, premiering Sept. 29, however, are already experts at their craft. These wacky abilities call for lots of special effects. One of the most visually stunning is Medusa's hair powers on Inhumans. The Queen's red tresses will put Merida from Brave to shame.

In the comics, Medusa has trichokinetic powers, meaning she can control her hair as if it were an appendage. She has this ability due to a psionic field that spreads throughout her hair follicles. It's also highly resilient, stronger than steel or iron and very bendy.

This guarantees her a wealth of hair-related skills that go way beyond crafting the perfect fishtail braid. She can snap it like a whip. In one comic, Medusa whipped her hair (back and forth) so fast that she created sonic booms. She can grow or shrink it on command. She can tie someone up and bind them, using her hair as rope. She can pick locks, thread needles, shuffle cards, toss a salad, type a novel, and basically achieve all of your multi-tasking dreams.

Her hair can also support and absorb a tremendous amount of weight — just over a ton if she balances and supports correctly. Cut her hair off? She'll grow it back, and can still control the pieces that have been removed.

How does something this magnificent translate to the small screen? "We have seven wonderful houses," director Roel Reine told press at San Diego Comic-Con. "Visual effects houses around the world that are working day and night right now to get the visual effects done. It's cool. For us, the hair is really difficult. Hair is the most difficult visual effect ever."

Reine also told reporters that the hair was one of the things he was most excited for audiences to see. After the first trailer for Inhumans hit the internet, fans reacted without all of the information. "There were a lot of people complaining about a lot of stuff," Reine said. "But we were not ready. Now we are ready to show the hair of Medusa, now we are ready to show the scope and the big stuff."

Since Medusa switches between using single strands and her whole head of hair at a time, that's a lot of movement. It almost moves like water, which is also difficult to render in visual effects. To make that look effortless and real takes a lot of work behind the scenes.

It's also a challenge for the actor providing the motion and intention behind it all, naturally, as well. Serinda Swan plays Medusa in the series, and at San Diego Comic-Con, she explained how her character's unique powers shaped her performance. "I had to learn how to 'hact,'" said Swan, "which is hair act."

It changed how she moved and interacted with everyday objects, even something as simple as a cup of coffee. "When it came to fighting," Swan says, "I really used it as like a limb. When you fight, [the hair] kind of pulls up and tightens in. When that happens, you have to figure out how to do that just with your body and with your spine more so and then trust that they're going to have your back — literally — and build something around that that moves."

Just doing the motions to mime magical hair on set without any visual effects added, she says, "I'd feel like a crazy person. Then I saw [the finished product] last night and was blown away and so excited, because obviously that was such a big part. I was so happy."

Hopefully fans will be as happy as Swan with the way Inhumans brings Medusa's unique powers to life.