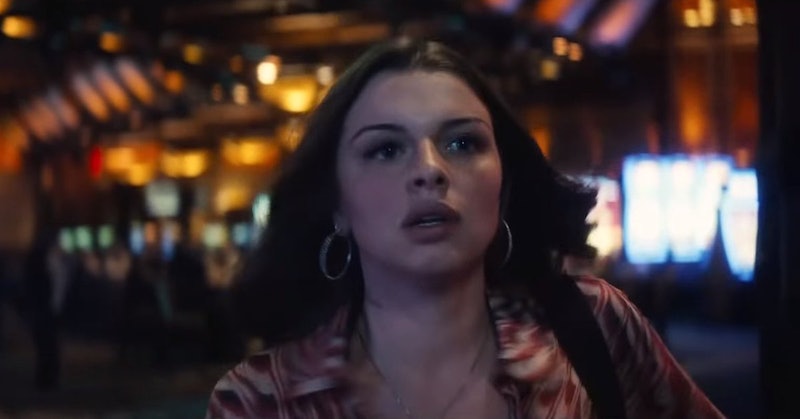 Sitting in a luxe midtown Manhattan suite, filmmaker, designer, artist, and New York personality Julia Fox is distracted by some cut gems. Shifting her diamond rings from finger to finger, she marvels at the different combinations. "Sorry I'm playing with these rings. They're Lorraine Schwartz and I borrowed them last night," Fox says dreamily, lost in their sparkle.

In a film filled with big-name actors and IRL celebrities including Adam Sandler, Idina Menzel, Eric Bogosian, and basketball player Kevin Garnett, the breakout star of the Safdie brothers' Uncut Gems is Fox, who plays Julia, a fictionalized version of herself who's the street-smart sidepiece of Sandler's Howard Ratner. Howard is a charming but overly optimistic gambler and Diamond District dealer who, after a series of losses, finds himself way in over his head. His solution? Bigger gambles. What follows is a gonzo run through New York City, as Howard wheels and deals in frantic hopes of scoring big and entangling Julia in his plans.

While Fox's character is the other woman in Howard's marriage and is certainly no angel when it comes to manipulating others for money, she's genuinely crazy for "Howie," and is the only person around him who's willing to take the same risks that he does. "I think at first, you're like Oh, she's partying, she's bad news, and then you realize, No, she's actually the only redeeming character in this mix," Fox says of Julia. "She's really ride or die... she's a trooper." Her schemes, like flirting The Weeknd so he'll buy chains or hanging out a window to pass Howard cash, are all done with the best of intentions.

It's exactly the kind of exciting and chaotic character that Fox is perfect at embodying, so much so that her on-screen counterpart was actually written with her in mind. But despite that privilege, Fox still had to fight to get the part. She'd spoken to co-creator Josh Safdie about the role for "like, five years," but as big stars and major studios became attached to the project, snagging a role based on herself became less of a sure thing. Screen-testing with Sandler ended up being the clincher. "We really bounced off each other," she says. "The momentum was good."

Their chemistry is evident in one of the film's most touching moments, when Julia reconciles with Howard. She shows him the tattoo that she got of his name, but the moment ends up being bittersweet. Howard is touched by her gesture, but cites the Jewish cemetery myth, ruefully saying that they can't be buried together in a Jewish cemetery if she has any ink. It's a scene that's based in Fox's reality, too. "I really did do that," she admits. "I really got my ex-boyfriend's name tattooed after a big fight. I actually still have it even through we broke up like, years ago."

Still, she's quick to point out the differences between her character and herself. "I wouldn't really wear those outfits. I'm more of a pants girl," she notes. And it's not as easy as you'd think to play (mostly) yourself — plenty of IRL personalities fall flat onscreen. "I think it's really a lot of ego. You're this big character in real life, but when the cameras are rolling, are you able to put your ego aside and look silly? Do something a little humiliating or embarrassing? Actors are trained to do that, but real people might feel a little self-conscious." Fox, though, is anything but.

Julia the character isn't the only thing real about Uncut Gems. The film is also a way to capture a specific time and place — in this case the Diamond District of New York City in 2012 — in amber, an increasing urgency for a city in which big money is destroying neighborhood institutions. "It's a little disenchanting when all the landmarks of your childhood are no longer there and you see these other awful places that have taken over — it leaves a sour taste in your mouth," says Fox, who grew up in Yorkville. Though she was a former scene girl, she says she doesn't even go out anymore. "I feel like there used to be a time when New York locals and artists owned clubs and the vibe was just so real; it was so fun. Now it's just these really commercial, synthetic [places]… it doesn't feel real, you know?"

Though Howard's madcap journey through the streets of New York didn't actually happen, Uncut Gems' action is steeped in the reality of the city Fox knows, loves, and hopes doesn't completely disappear. But even if it does someday, Fox's first big movie role has her thankful for all the real people she met along the way. "Josh managed to find just the greatest people that I'll be friends with forever. We all had this baby together; now it's going out into the world and I guess we'll see where it goes," she says. "But we'll always be connected."