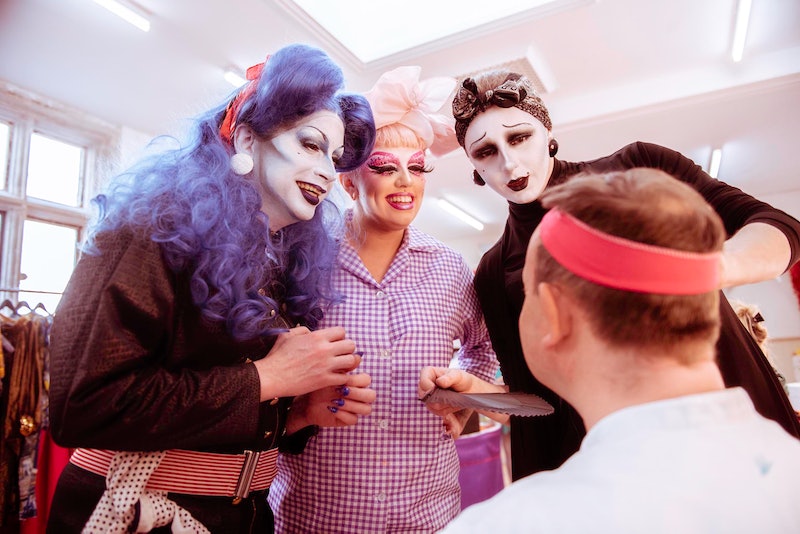 For the past several years, drag queens have been steadily taking over TV screens, as they've come to queer your usual TV schedule. Once part of the underground, drag culture has claimed its place in the spotlight where is deserves to be, especially with the help of reality TV show RuPaul's Drag Race, which'll soon be getting its own UK version. Also coming to the UK is the cast of Drag SOS, a new show which, according to the Channel 4 blurb, will "help ordinary Brits go on a voyage of self -discovery as they transform into a bigger, better, drag-enhanced versions of themselves."

The show has been described by the Telegraph as a "British mix of Queer Eye and RuPaul's Drag Race" and you can see why. Anchoring the TV show is The Family Gorgeous, a drag collective from Manchester. As Digital Spy reports, the first episode in the series saw fans of the show get very emotional after a trip to Dover saw the collective help 55-year-old Shaun at the behest of his son Owen. "Channel 4 have done this RIGHT. So uplifting and emotional and celebratory. Well done all involved, some of the most beautiful real life tv I’ve seen," tweeted @misterjoeblack.

So who are the queens behind this new TV show you need in your life? Keep reading to get to know the drag queens of Drag SOS.

Mama Hen to the The Family Gorgeous and one of its co-founders, Cheddar Gorgeous brings some of the most diabolically beautiful looks to the UK's drag scene. While she trained to be a social worker, according to Channel 4, she found that drag also happened to pull from her caring skill set. In Cheddar's words: "Whether you’re male, female, straight or gay, old or young, drag is all about finding your most glamorous route to self-confidence."

Staying true to The Family Gorgeous tradition, Lill can seriously turn a look. She takes classic feminine figures and spins them into her own uncanny creations, taking inspiration from fashion legends including David LaChapelle and Guy Bourdin, as she told Hunger magazine back in 2016.

While The Family Gorgeous mostly play in their home city of Manchester, you're more likely to find Astina Mandella firing up the streets of London. Performing as part of the famous Sink The Pink troupe, Mandella's had plenty of iconic moments, including the time she toured with Sporty Spice aka Melanie C.

As co-founder of The Family Gorgeous, alongside Cheddar Gorgeous, Anna has often be described as a "shock in a frock" by her Mancunian fans. In fact, Anna's left such an impression on the city that there's even a mural dedicated to her in the gay village. Coming from a theatre background, Anna brings intricate costume design to her drag, and takes inspiration from the neon coloured palette of the 80s Club Kid scene.

As a bio queen (a cis female drag performer) TeTe Bangs has never seen gender as an obstacle. As a performer who tends to challenge the mainstream, and particularly its depiction of queer people, TeTe is a very necessary attribute to UK drag at large. Growing up as a lesbian, TeTe felt pressured to conform to masculine expectations of her, as she told Attitude Magazine in April, 2019. Drag provides TeTe not only with an opportunity to express her femininity, but to poke fun of it a little too.

Described by the Guardian as "a little aniseed bite amid the delicious bag of pick’n’mix sweeties," Liquorice Black operates in monochrome, and looks fabulous doing it. "We met all sorts of characters," Liquorice told Attitude of working on Drag SOS. "Some really shy people: we worked with a farmer, a personal trainer... it's not just people from the LGBTQ community, everyone's involved."

No, don't worry, there's no relation. Try saying "Donna Trump" in a Brummie accent, it's supposed to sound a bit like "done a trump," which apparently, is exactly what Donna was going for. As she told Drag Adventures, Donna is daughter to Cheddar Gorgeous, and they first met when she appeared at Cheddar's Cha Cha Boudoir club night. Nowadays, Donna's making her own mark, and serves as a guest mentor on Drag SOS.