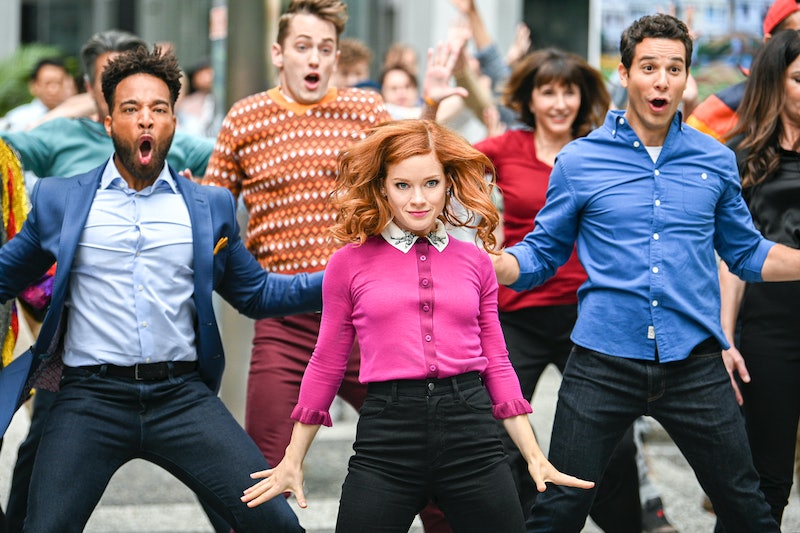 Ever had a song stuck in your head for days? Have you ever fantasized that those songs may reflect the innermost thoughts and feelings of those around you? What if you were... actually right? Though this may not reflect your own real life, you're sure to love Zoey's Extraordinary Playlist, in which mild-mannered coder Zoey Clarke actually has that happen to her. It's definite "favorite new show" material.

With a hit-packed soundtrack of classic favorites and current chart-toppers, the tunes from the show aren't the only bits to get stuck in your head. The performances will seriously stick with you. The ensemble cast includes heavy-hitters like Lauren Graham, Skylar Astin, and Mary Steenburgen as well as newcomers like Jane Levy, who gives a moving and relatable performance as Zoey.

Read on to meet the kooky, sincere, hilarious, and endearing characters in Zoey's world. Make sure to catch Zoey's Extraordinary Playlist, with a new episode now streaming on NBC.

Whip-smart and introverted, Zoey (Jane Levy) is a computer programmer with a flair for the formulaic and logical. But as she says her own initial, clunky interview for a big promotion at the tech company where she works — "I became a coder so I wouldn't have to deal with anything... like people." That all changes when she has a freak occurrence the middle of a routine MRI, and is suddenly able to hear the innermost thoughts of everyone around her... and they're all through song. Though her new powers feel overwhelming and downright creepy to her at first, they open up a complicated and rich world of emotion, ultimately enabling her to connect to her friends, family, and the world in a whole new way.

A renaissance woman if there ever was one, Mo (Alex Newell) is Zoey's creative and free-spirited neighbor who, on top of having multiple careers and hobbies, can be found regularly belting along to her wall-quaking music (much to Zoey's initial chagrin). Though they never had much in common, Mo is the first person to learn of Zoey's powers, which makes one thing that she actually finds interesting about her. Though they couldn't have less in common, Mo is a (mostly) nonjudgmental support for Zoey through her fall down the jukebox rabbit hole.

Kind yet sarcastic, supportive yet insecure, Max (Skylar Astin) is Zoey's BFF and co-worker at SPRQ Point. Problem is, he's been in love with Zoey forever, and keeping it a secret from her. That is, until Zoey's powers blow his cover... and Max is none the wiser. Though this complicates their formerly chill relationship, Max is able to embark on his own journey to inner strength and confidence.

Played by Mary Steenburgen, Zoey’s mother Maggie is a natural introvert like her daughter, but a deeply nurturing soul. As a landscape architect, she's basically a literal earth mother. She keeps a strong front for her family as she cares for her deteriorating husband, but the grief and tragedy are increasingly difficult to navigate. Luckily, she is able to lean on her daughter, Zoey.

Played by Peter Gallagher, Mitch Clarke was once a model father — fun-loving, kind, respondible, and a wonderful partner to his wife. But over the course of a year, he has succumbed to a battle with a degenerative disease that has left him unable to walk or speak. But in an unexpected turn of events, Zoey’s powers allow her a glimpse inside her Dad's mind and enlighten her to the fact that the the kind, funny, vibrant man still alive inside of his ailing body.

Simon (John Clarence Stewart) is Zoey's office crush who is dapper, charming, and has great taste in desserts. Though on the outside, his life seems perfect — great job, pretty fiancé — he's dealing with some serious demons of his own, which bonds him to Zoey. Though they connect on an emotional level, there is the matter of the aforementioned fiancé.

Played by Lauren Graham, Joan is Zoey's brilliant, no-nonsense, mercurial and power-house boss. As one of the only other women in the company to rise to a managerial role, Joan takes Zoey under her wing and becomes a valuable mentor. As their relationship deepens, Joan comes to lean on Zoey for emotional guidance as she goes through a bump in her high-profile marriage. In spite of their generational divide, these two women have plenty to teach each other.

This article is sponsored by Zoey's Extraordinary Playlist, which is now streaming on NBC.

More like this
The Jonas Brothers' New Album Has A Very Meta Name
By Alyssa Lapid
This Girls Aloud x Sugababes Collab Still Hits All The Right Notes
By Sophie McEvoy
The Spice Girls Are Set To Reunite At King Charles III’s Coronation
By Sam Ramsden
Cruz Beckham Teased New Music With An Adorable Nod To Mom Victoria Beckham
By Stephanie Topacio Long
Get Even More From Bustle — Sign Up For The Newsletter
From hair trends to relationship advice, our daily newsletter has everything you need to sound like a person who’s on TikTok, even if you aren’t.