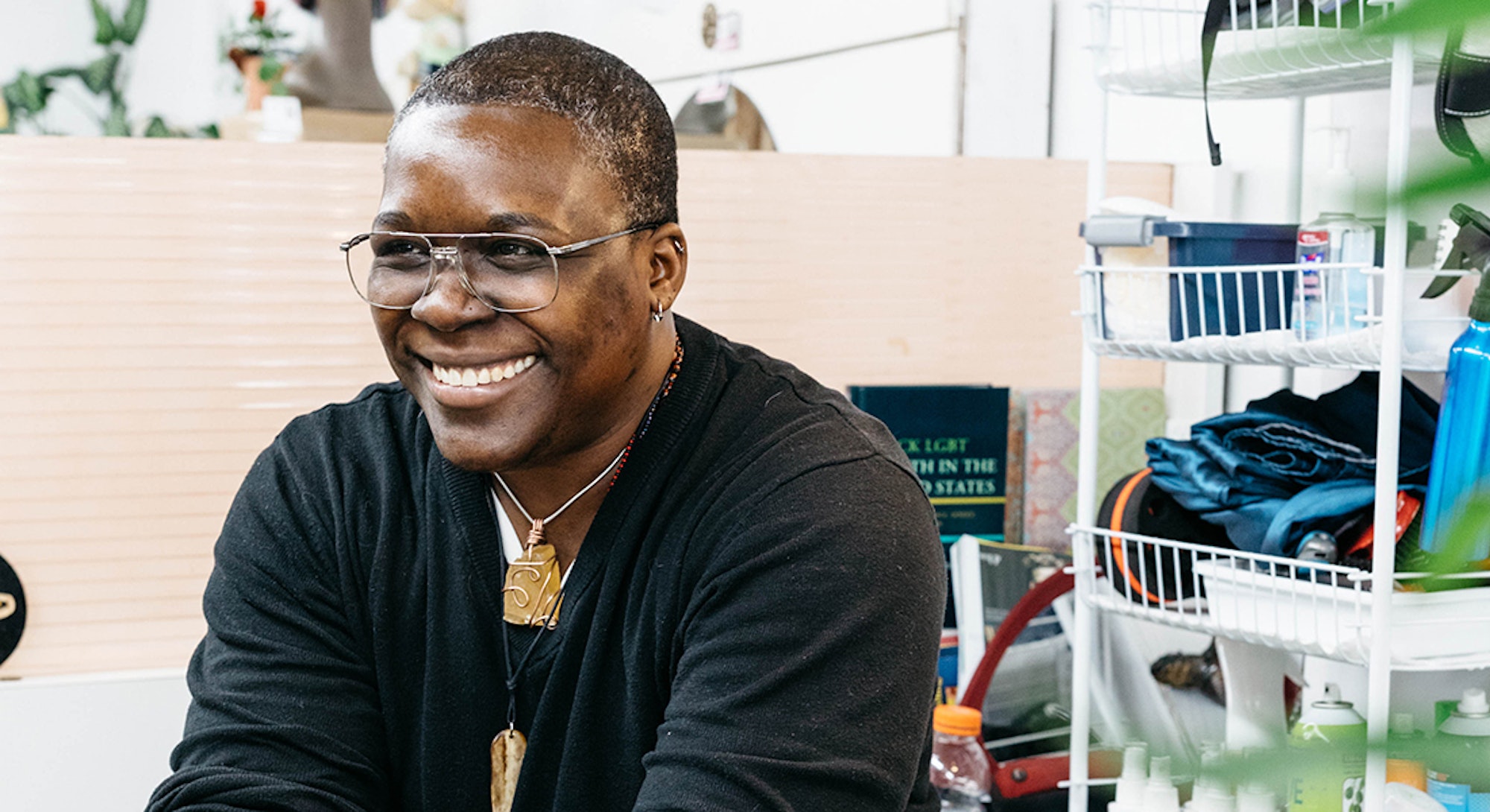 Every time you sit in a salon chair, an exchange takes place, one that involves a certain level of trust: Your barber or stylist trusts that you'll accurately describe what you want, and you trust that they'll meet your request without comment or judgment. It's a simple, regular transaction for many, but for queer and gender non-conforming people, it can be much more complicated.

The idea that something as innocuous as a haircut could lead to discomfort, antagonism, and even violence is something that many cisgender people aren't often forced to contend with — and the anxieties surrounding these interactions aren't just reserved for queer men seeking inclusive barbers in environments that boast a culture of machismo. When you're a passing trans woman, for example, few stylists will question your decision to go for the shag or the long layers — but if you're in the middle of a gender transition and aren't passing, you might get opinions and judgments that you never asked for.

Mia Catherine Smith knows the complexities of being on both sides of the chair. Smith is a 42-year-old trans woman from North Carolina who just completed her transition in 2015. She's also a stylist with over 20 years of experience, and her bawdy Southern drawl, sneaky sense of humor, and gift of gab makes it clear that she's at ease chopping it up with customers of all genders.

"I've gone through exactly 1,172 stylists in my lifetime, so that will tell you how many bad stylists there are out there," Smith says. "I’ve been shamed, I’ve been cussed at, I’ve been asked to leave. And all of those things happened because they may have caught onto my secret. They could see it, or it was on my face, or they said something and I reacted — all of those things."

Poor treatment in salons is what led Smith to found Safe In My Chair, an online directory of queer-friendly stylists, barbers, makeup artists and salons. There are over a thousand names in the directory right now, located all over the world — and the list keeps growing every day. All are fully vetted by Smith and her team, to ensure that anyone using the site as a resource will find only safe spaces. They reach out to people in the area, speak to acquaintances, and peruse the business's Facebook page in order to gauge the ethos of the shop. Smith recently excluded one salon because the business owner's husband was donning a confederate flag "in every single picture," she says.

Having a resource like Safe In My Chair is invaluable when trial and error isn't just frustrating, but potentially dangerous and uncomfortable.

Producer and actor Josh Adam Ramos, who identifies as queer, started looking for barbers when he moved from Connecticut to New York City, but he struggled to feel comfortable in many shops. "Sometimes it was fine, it might have just been in my own head," he says. "Other times it was actually a room of toxic masculinity that I had zero time for. Barbers are a place where men congregate. It's not really any different than, say, a locker room, where men go to get manly — but I'm not."

Frustrated with finding himself in the same environment repeatedly, Ramos decided to narrow his search and comb the internet for barbers and salons that were gay- and queer-friendly.

"It was, like, last year when I finally was like, 'What the fuck? This is New York City, there has to be a queer barber.' And so I just Googled 'gay-friendly barbers in New York,' and two showed up."

Two of the barbers who appear at the top of the Google results are Khane Kutzwell and Dez Marshall (the barber who Ramos eventually found and started visiting). Both Kutzwell and Marshall are queer people of color who saw the opportunity to create safe hair cutting spaces for the queer and trans folks in their communities. Kutzwell and Marshall know each other — and both advertise their services via Instagram and Facebook. Kutzwell brands herself as Camera Ready Kutz, and Marshall is Dez Is Dope across social media.

Kutzwell has been cutting hair since 2007. Currently, she has a chair at a neighborhood barber shop in Flatbush, Brooklyn called Empire Strikes Back. It's an large and venerable shop, the kind that smells like the takeout food some of the older regulars share while they wait for a trim. Fluorescent lighting and drop ceilings provide a backdrop for the murmuring and occasional bellows of laughter that pass back and forth between the barbers and the back of their clients heads. Empire doesn't advertise the fact that Kutzwell's chair is queer-friendly, but she says that everyone in the shop respects her clientele and understands what she's trying to do.

"The most important thing to me when it comes to relating to my clients is to make sure I'm attentive, sensitive and understanding of their reasons for coming to me," Kutzwell says. "A new look, being tired of bad treatment, not sure what they want and need someone with patience... and for my trans clients, help with their hair as they transition. I always say that I sell self-esteem...it's my job to make sure people walk out feeling better about how they look than they did when they first sat down.

Dez Marshall works out of a second floor shop in downtown Brooklyn called Colleen's House of Beauty. Marshall's space is in a tiny, windowless room down a dim corridor in the back of the shop, but somehow, the space is still inviting. Like Kutzwell, Marshall has a massive smile and the kind of unassuming, friendly presence that could put even the most nervous client at ease. She's been cutting hair for three years, and like Kutzwell, her mission is to create an environment where people of all gender identities can feel safe, and like themselves.

Before she stepped behind the chair, Marshall spent eight years working as a community organizer, serving youths of color at two different organizations. During those years, she had a hard time finding someone to cut her own hair.

"It took me almost a year to find a barber who cut my hair the way I wanted it, and wasn't disrespectful to me as a queer woman of color. It hit me that my members were probably having the same issue in regards to gender identity and expression in a barbershop, on top of maybe not having the money."

After making the decision to leave the organizing world, Marshall realized that the next natural step was for her was to actually provide the inclusive hair services she'd so desperately searched for over the years. With that idea in mind, she became an apprentice, got her licensure, and became a barber.

"I knew from the jump that I wanted to be the barber for other queer, trans and gender non-conforming folks. Getting your hair cut is supposed to be a relaxing thing. But for our community, it can be very intimidating, traumatizing, and sometimes violent."

The idea of offering safety in spaces like these is something that Smith, Marshall, and Kutzwell all mentioned: The desire to create a welcoming sanctuary drives them to do the work they do. All three rely heavily on social media to get the word out, and to emphasize that no matter what, the client's comfort is the top priority.

"At my shop, you can walk in fully expressing your gender identity, talk about who you hooked up with the night before, discuss the ups and downs of your relationships, comment on how sexy Beyoncé is, talk sports, current events, the fear of Trump; everything," Marshall says. "And no one flinches. No one sucks their teeth at your comments. You won't be called any derogatory term. Pronouns are respected and used correctly. You will be respected as a full person, because you are a full person. And most importantly, you will get the cut you asked for."

And according to Marshall, that last part is just as important as anything else she offers — hair style and length are a huge part of gender presentation, and many traditional barbers simply can't look beyond gender norms.

"Many of my clients share horror stories about their experiences at other shops," says Marshall. "They ask for a particular cut, but because they present as more feminine, the person will refuse to cut their hair short as asked. They share stories of feeling like they are gawked at by the other barbers, or ignored all together. I myself have been called names at shops, or grilled about my sex life because they realized I was queer. No one should have to go through that."

For Kutzwell, as for Marshall, the horror stories are what inspired her to get into the game.

"What made me decide to go to barber school was hearing story after story about my friends' bad experiences at neighborhood barbershops," she says. "They would complain about not getting the cuts they asked for, being flat-out refused service, being subject to negative remarks, having to hear extremely degrading conversations, being stared at or asked personal questions about their sexual preferences. The moment I started hearing those stories was the moment I knew I would cater to the LGBTQAI community," Kutzwell jokes, "while staying what I call 'straight friendly.'"

Kutzwell, Marshall, and Smith aren't just serving the queer community — they're all part of it, and they've all had the experience of being made to feel uncomfortable at barber shops and salons, and they all know exactly what it's like to be the customer in the chair.

"When you're sitting in the salon chair and you have the cape that’s around you, you've really kind of given control over to the stylist. You're wearing a cape, so any necklace, articles of clothing or bracelets that make you uniquely you, those kind of disappear. It’s very difficult to focus on who you are in the moment, and that allowed me to be able to be Mia — that's where Mia existed. I feel comfortable behind behind the chair; that's my passion. But being in the chair? That’s like church. For a trans person, that's where all your dreams — dreams of your outward appearance — can come true."

Though Marshall isn't trans, her story runs parallel to Smith's.

"I am a woman, my gender expression isn't traditionally feminine, and I don't hide any of these facts about myself. When I finally did find a barber, it wasn't the best cut, but I was treated with respect. I didn't want others to have to make that choice: A great cut but be treated like shit, or a shitty cut and be treated like a person. I want to provide both," Marshall says. "That's the main thing I want my clients to walk away with: They are getting the real me, and my hope is to get the real them. I send out a monthly email to my clients and always end it with: Let's continue to build community, one cut at a time."