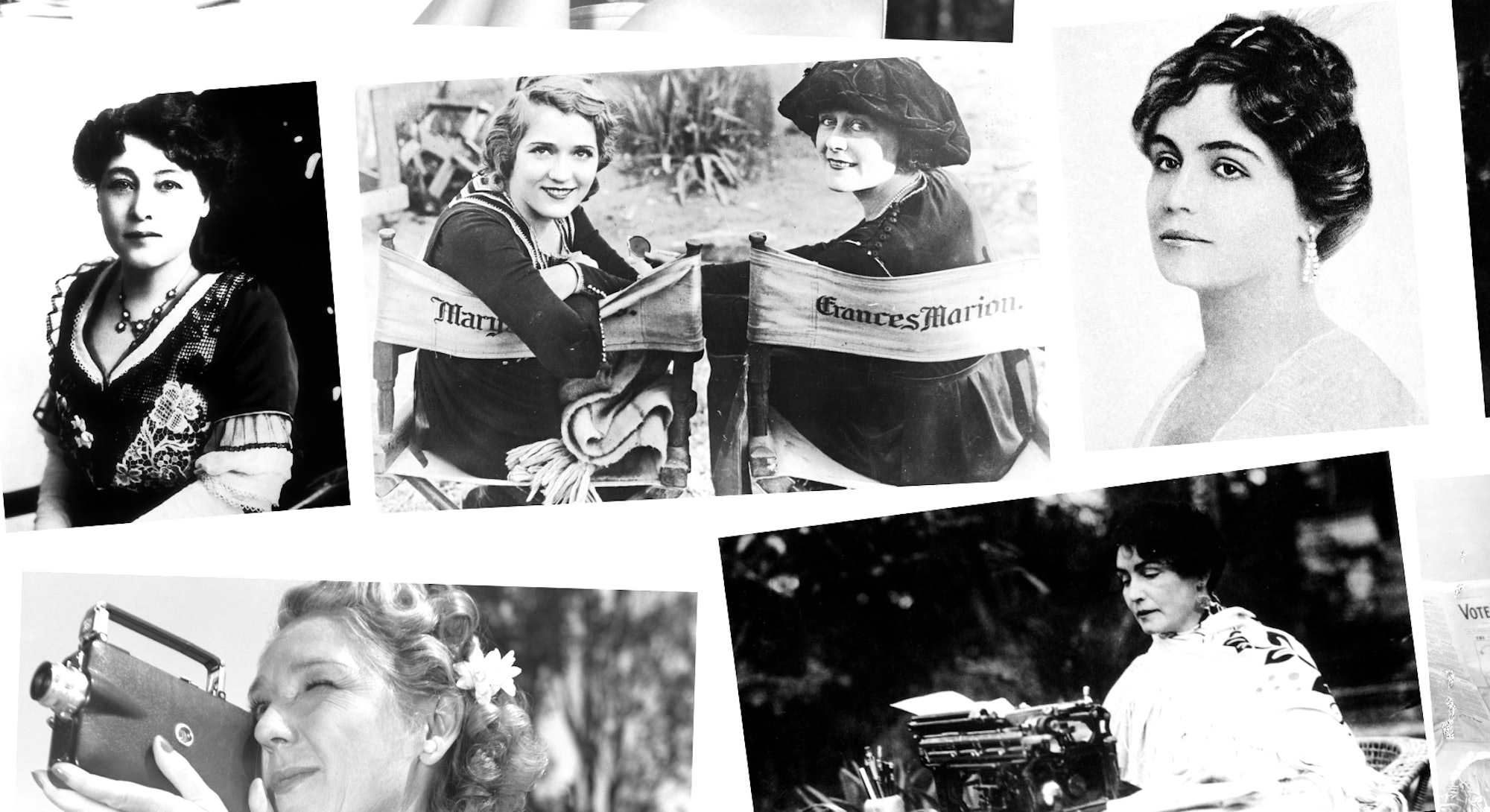 In 1895, a 22-year-old secretary at a French camera company rises through the ranks to become the first female director in history. It sounds like a fun pitch for an alternate reality story, but it actually happened. Her name was Alice Guy-Blaché, and she was a leading innovator in the earliest days of film. In fact, she was a part of the industry even before what is conventionally marked as the dawn of cinema: the Lumière brothers’ first public film screening in December 1895 in Paris. Guy-Blaché had attended an earlier private demonstration of their pioneering projection technology and thought their documentary-style footage barely scratched the surface of what the new medium could do. So, she asked her boss Léon Gaumont for permission to make her own film. The result is 1896’s La Fée aux Choux, a short fairy tale that was not only the first film directed by a woman, but probably the first narrative film ever made. It was the start of a briefly thriving era for women filmmakers that shaped Hollywood as we know it today – so why, a century later, is it hardly remembered?

Though Guy-Blaché spent the next two decades directing over 1,000 increasingly sophisticated films and became one of the first women to run her own studio when she co-founded The Solax Company in 1910, she was essentially forced into retirement by 1922, a full 66 years before her death. As detailed in Pamela B. Green’s compelling 2019 documentary Be Natural: The Untold Story of Alice Guy-Blaché, Guy-Blaché spent much of her later years writing letters to historians to try to correct her inexplicable absence from the history books. Perhaps unsurprisingly, these efforts went largely ignored, and her work wasn’t rediscovered until the 1970s, when feminist film scholars like Sharon Smith and Gerald Peary began to question the assumption that the film industry had always been run by men.

Another 20 years later, film historians realized women hadn’t just been the exception to the rule in the silent film era — they were a key part of it. Created by film scholar Jane Gaines in 1993, Columbia University’s Women Film Pioneers Project (WFPP) is now an online database dedicated to documenting the contributions women made to the silent film era beyond acting. Today, the database has over 280 profiles of women who worked across six continents in roles ranging from accountants and agents to screenwriters, editors, producers, art directors, camera operators, casting directors, composers, cinematographers, costume designers, and even animal trainers and stunt performers. There are 117 profiles of female directors alone.

Among them are Esther Eng, an openly gay Cantonese–American director who made Chinese-language films in both the United States and Hong Kong during the 1930s and ’40s, and Nell Shipman, a Canadian director who shot animal-filled adventure films on location in the 1910s and ’20s. It was common for women to own or co-own independent production studios in the silent era, and there were also a huge number of powerful women screenwriters, including Anita Loos, June Mathis, and Frances Marion, who regularly hosted “hen parties” that doubled as networking events for women in Hollywood.

As with modern mediums like podcasting or YouTube, the early days of film began with a bunch of creative amateurs trying stuff out and putting it into the world for people to see. There was no sense of what the film industry could or would become, and many dismissed movies as a fad or novelty, in the way that today we might dismiss VR. That “anything goes” attitude made it easier for women to carve out a space in a field no one was taking particularly seriously. As Lois Weber, America’s first female director, put it, “I grew up in a business when everybody was so busy learning their particular branch of the new industry, that no one had time to notice whether or not a woman was gaining a foothold.”

While Guy-Blaché was part of the very earliest wave of innovation and experimentation, Weber was part of the next wave — the birth of sophisticated feature films that pioneered the visual cinematic language we still use today. The filmmakers we now most associate with this era are Cecil B. DeMille and particularly D. W. Griffith and his 1915 film The Birth of a Nation. At the time, however, Weber was considered every bit his equal. By 1916, she was the highest-paid director in Hollywood, full stop.

Weber explicitly saw her films as a vehicle for preaching social messages to the masses, and she used innovative new techniques like split screen and double exposure to aid her humanistic, sensitive storytelling. Like many female creators of the silent film era, including Guy-Blaché, Weber worked in partnership with her husband, Phillips Smalley, as a way to gain legitimacy in the business — even though she was doing most of the creative work. As historian Shelley Stamp explains in a KCET feature, the image of Weber as a married, middle-class woman was actually considered a boon. Theater owners wanted to add a sense of respectability to their establishments by courting white middle-class female audiences, and screening films made by white middle-class women was thought to be a way to reach that coveted demographic.

Weber’s persona of respectability also allowed her to push social boundaries. In the era before the 1930 Motion Picture Production Code or “Hays Code” put strict limits on what could and couldn’t be depicted onscreen, Weber’s films openly talked about topics like birth control, drug abuse, capital punishment, and abortion. Her 1915 film Hypocrites even featured a fully nude woman to represent “naked truth.” However, not all of her messages hold up as progressive. For instance, her 1916 film Where Are My Children? makes a eugenics-based argument for providing birth control to the poor while simultaneously telling a melodramatic cautionary tale about upper-class women who frivolously get abortions. Nonetheless, it went on to become Universal Pictures’ most successful film of the year.

As an era of segregation, these early years in Hollywood didn't offer the same opportunities to black women as their white peers. Nevertheless, they carved out their own spaces for artistic experimentation and expression in films largely aimed at black audiences. Anchored by the pioneering work of black filmmaker Oscar Micheaux and his wife Alice B. Russell in Chicago, the Midwest became a hub for black independent cinema in the 1910s and ’20s. Tressie Souders and Maria P. Williams both hailed from Kansas City, Missouri, and were each at different points labeled the first black female filmmaker. Meanwhile, writer Zora Neale Hurston made ethnographic films that recorded the everyday lives of black Americans in the South. For the most part, however, a dearth of historical research and few surviving films means there’s still more work to be done when it comes to unearthing the full history of black women and other women of color directors in the silent era.

As the mainstream film industry moved from its origins in Fort Lee, New Jersey, to the more hospitable location of Hollywood in the 1910s and ’20s, big, vertically integrated studios began to dominate the market and put a stranglehold on independent creativity and experimentation. Actor Mary Pickford was one of the earliest people to push back against the unfair system. Along with D. W. Griffith, Charlie Chaplin, and Douglas Fairbanks, Pickford formed the United Artists Corporation in 1919, which advocated for more creative control for artists. The move made Pickford one of the most powerful women in Hollywood.

Yet the rise of Hollywood as a major industry was ultimately the undoing for women’s roles in it. As USC history professor Steve J. Ross explains in Be Natural, “Wall Street money comes in the front door, women are forced out the back door.” Once it was clear there was serious wealth and prestige in the film industry, men wanted in. And they had the social clout to simply take over. For instance, in the early days of the silent era, editing or “cutting” was considered menial work akin to sewing, and the majority of these jobs belonged to women. Once editing was reimagined as a crucial creative role, the entry-level jobs largely started going to men.

There were individual reasons why certain women failed to survive the switch from silent films to sound in the late 1920s. Weber’s moralizing fell out of fashion, while Pickford grew out of the ingénue roles that had made her famous. But it was systematic gatekeeping that kept other women from rising to take their place. The exception that proves the rule is Dorothy Arzner, a lesbian filmmaker who began her career in the silent era and became the only female director working in Hollywood from 1927 until her retirement in 1943.

Once Hollywood began to solidify as a male-dominated industry, it became more convenient to lean into the myth that it had always been that way, that the “founding fathers of film” founded it alone. So while Guy-Blaché’s contemporary Georges Méliès also experienced a period of obscurity after excitement faded over his early special effects films like 1902’s A Trip to the Moon, his work was already being rediscovered, celebrated, and archived as early as 1929. Guy-Blaché, meanwhile, was downplayed or ignored by the mid-century historians immortalizing the earliest days of film. Like so many of these pioneering women, she saw herself written out of history in real time.

The historical record is still being corrected today. In Be Natural, Green uncovers new material related to Guy-Blaché’s life, some of which she finds sitting in waterlogged boxes in people’s garages. The Women Film Pioneers Project, meanwhile, continues to add more and more profiles to its collection. A recent New Yorker article argues that we might even be underestimating the number of crucial behind-the-scenes roles women still played in the 1930s and ’40s, even as they were forced to step away from directing and producing. As WFPP puts it, “What we assume never existed is what we invariably find.”

The fact that the early days of film were a haven for women challenges our notion that social progress is always linear and incremental. It also shifts the lens on the modern call for gender equality in Hollywood. This isn’t a case of women fighting to enter a space that’s always been dominated by men. It’s a case of women reclaiming space in an industry they helped build in the first place.