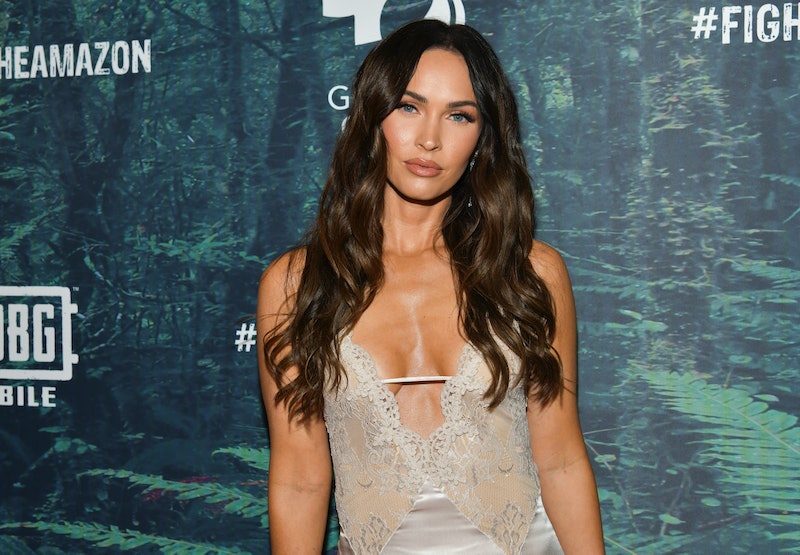 Megan Fox wants to set a few things straight about the ways she's been mistreated by Hollywood over the years. In response to a recent swell of support for the actor on social media, Megan Fox released a statement about Michael Bay and her experiences working for him on Instagram, in which she clarified that she never felt "preyed on" by the director. On June 20, Twitter user @reservoird0gs shared a clip of Fox from a 2009 appearance on Jimmy Kimmel Live!, in which she recalled being asked to dance under a waterfall "wearing a stars and stripes bikini, and a red cowboy hat and six-inch heels," as a 15-year-old extra in Bay's 2003 film, Bad Boys II.

That clip — along with another viral claim that Fox was asked to wash Bay's car as part of her Transformers audition — inspired the actor to set the record straight with a powerful post on Instagram. "I know that a discussion has erupted online surrounding some of my experiences in Hollywood and the subsequent mishandling of this information by the media and society in general," Fox wrote. The actor added that "while I greatly appreciate the outpouring of support," she wanted to "clarify some of the details" of those stories.

Explaining that while she was "15 or 16" when she appeared in Bad Boys II, Fox clarified that the Transformers audition took place when she was around 19-years-old. "I did 'work' on one of Michael’s Ferrari’s during one of the audition scenes," she wrote, adding that by "work," she was just "pretending to know how to hold a wrench." She also added that the audition took place in a "studio parking lot," not Bay's driveway.

"There were several other crew members and employees present and I was at no point undressed or anything similar," Fox recalled. "So as far as this particular audition story, I was not underaged at the time and I was not made to 'wash' or work on someone’s cars in a way that was extraneous from the material in the actual script. I hope that whatever opinions are formed around these episodes will at least be seeded in the facts of the events."

Reiterating again how grateful she is for everyone's support, Fox then explained that her experiences with Bay were "inconsequential" in comparison to her "genuinely harrowing experiences in a ruthlessly misogynistic industry." Noting that there are "many names that deserve to be going viral in cancel culture right now," Fox made clear that, as far as she is concerned, Bay and Steven Spielberg, who produced Transformers, don't belong on that list.

"When it comes to my direct experiences with Michael and with Steven for that matter, I was never assaulted or preyed upon in what I felt was a sexual manner," she wrote. Fox concluded her statement by thanking all of the social media users who have supported her and called out the ways that Hollywood has treated her and other actors.

More like this
The 'Hocus Pocus' Sequel Finally Has A Release Date & It Makes Total Sense
By Shannon Barbour and Radhika Menon
Anne Hathaway’s ‘The Devil Wears Prada’ Anniversary Post Turned Political
By Brad Witter
All The Sneaky Lindsay Lohan Movie Easter Eggs In Her New Ad, Explained
By Stephanie Topacio Long
You Might Want To Rewatch 'Elvis' For This Britney Spears Easter Egg
By Grace Wehniainen
Get Even More From Bustle — Sign Up For The Newsletter