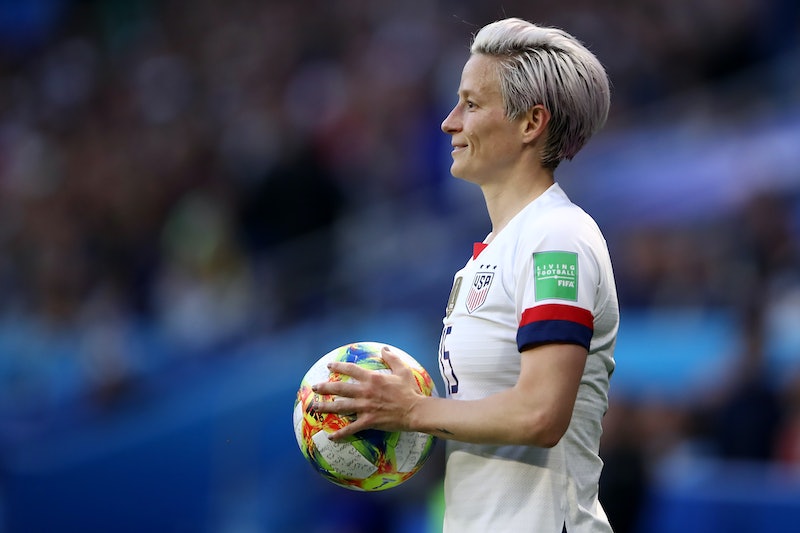 As the United States women's soccer team approaches its big World Cup quarterfinal game against France, the game isn't the only thing on everyone's mind. On Tuesday, soccer magazine Eight By Eight posted a video of an interview with star midfielder Megan Rapinoe in which she used an expletive to emphasize her intention not to visit the White House if her team wins the World Cup. It prompted a Twitter storm from President Donald Trump. Now, Rapinoe has apologized for her Trump comments, but she wasn't apologizing to the president.

“I stand by the comments that I made about not wanting to go to the White House, with exception of the expletive,” Rapinoe said at a press conference, per The New York Times. “My mom would be very upset about that."

Previously, she responded to a question from Eight By Eight about a hypothetical post-World Cup White House visit by saying, "I'm not going to the f*cking White House." In the past, Rapinoe hasn't been shy about criticizing the American government. She joined former NFL player Colin Kaepernick in kneeling during the national anthem, saying, "Being a gay American, I know what it means to look at the flag and not have it protect all of your liberties."

After the U.S. Soccer governing board passed a new bylaw requiring players to stand for the anthem, as ESPN reported, Rapinoe began standing — but with her arms at her sides, and not singing along as she used to, as she told Yahoo Sports.

In an interview with The Hill, Trump said that he didn't feel it was appropriate for Rapinoe to protest during the national anthem. After her explicit comment about not visiting the White House went public, Trump issued a response in his characteristic form — in a Twitter storm.

"Megan should WIN first before she TALKS! Finish the job! We haven’t yet ... invited Megan or the team, but I am now inviting the TEAM, win or lose," Trump wrote in a series of tweets.

Rapinoe's teammates and coach, however, have publicly backed her even in the face of the president's criticism.

“We all support Megan; she knows that,” United States Coach Jill Ellis said during the Thursday press conference, according to The New York Times. “We know we have each other’s back in there.”

"In regards to the 'President’s' tweet today, I know women who you cannot control or grope anger you, but I stand by @mPinoe & will sit this one out as well," fellow USWNT player Ali Krieger wrote on Twitter, referring to a potential White House visit. "I don’t support this administration nor their fight against LGBTQ+ citizens, immigrants & our most vulnerable."

Rapinoe, for her part, quickly turned the conversation away from the controversy over her remarks in the Eight By Eight video — but not before justifying her claim that she wouldn't visit the White House.

"I don’t think that I would want to go," Rapinoe said at the press conference of a White House visit, according to The New York Times. "I would encourage my teammates to think hard about lending that platform or having that co-opted by an administration that doesn’t feel the same way and fight for the same things we fight for.”

More like this
Watch Jacinda Arden’s Devastatingly Honest Resignation Speech
By Sam Ramsden
This Is When Netflix Is Going To Start Charging You For Sharing Passwords
By Darshita Goyal
6 Organizations Fighting Police Brutality That You Can Support Right Now
By Syeda Khaula Saad and JR Thorpe
Megan Mullally & Nick Offerman’s Relationship Includes Several Collaborations
By Caitlin Gallagher and Brad Witter
Get Even More From Bustle — Sign Up For The Newsletter
From hair trends to relationship advice, our daily newsletter has everything you need to sound like a person who’s on TikTok, even if you aren’t.