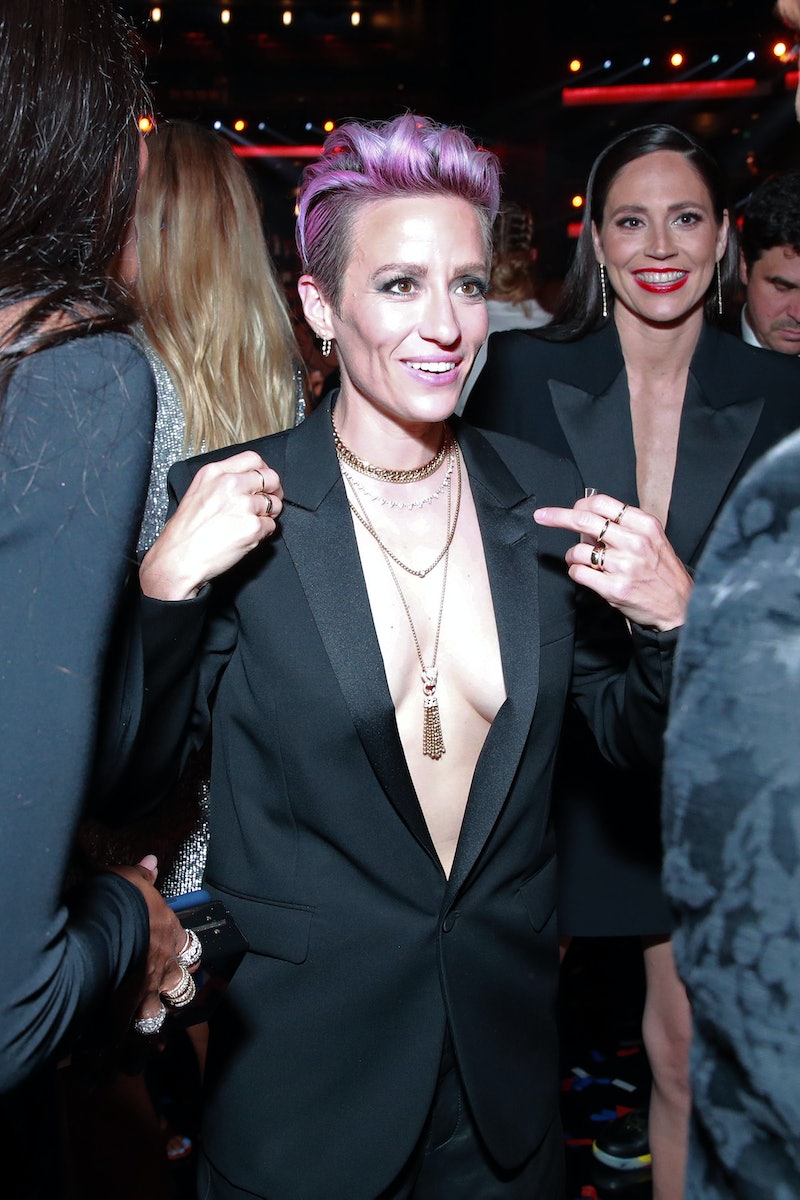 The United State's women's national soccer team is making shorts a black-tie option. Megan Rapinoe wore shorts to the ESPY Awards, proving the style works both off and on the field. The national team broke records at the 2019 Women's World Cup in France, breaking the record for the most goals scored by a team in the FIFA tournament. Afterwards, the team landed in Los Angeles for the ESPY Awards to win the Best Team trophy. Rapinoe decided to take her red carpet look to another level, wearing a blazer sans top, and adding a pair of leather shorts.

The whole look was sophisticated and sporty. The tailored blazer had satin lapels and plunged down to the waist. Rapinoe skipped a formal white button down, and instead decorated her bare neck with layers of gold chains. The athlete then paired the blazer with a pair of Coach leather shorts. Skipping heels, Rapinoe opted for a pair of black oxford shoes and white socks that went over the ankle.

“We literally just got off a plane a couple of hours ago, got hair and makeup in the plane, and we look pretty fabulous, I think,” Rapinoe said during the acceptance speech. “Thank you to ESPN, all of our followers, supporters around the world. It’s been an incredible journey. I’m super proud of all of these 22 fabulous ladies! Props to all of you. Thank you so much, and here’s to the next World Cup in another four years.”

The USWNT captain wasn't the only one to don a blazer on stage, though. While most of the 22-person team reached for cocktail dresses and evening gowns, there were a handful of members that decided to go a different route.

Christen Press wore an all yellow suit, and also skipped wearing a blouse underneath her blazer. The suit featured wide leg pants that were cropped at the ankles. Press accessorized the evening look with black platform heels and a blue mini bag for an extra pop of color.

Tobin Heath wore a blazer without a blouse and a pair of shorts just like Rapinoe, but decided to wear a pair of sneakers and sunglasses to finish off the look.

Ashlyn Harris wore a tuxedo to the red carpet, but with a spin. Harris' tux was black and completely sheer, adding an unexpected element to the formal getup. Harris also donned a bow tie, cinching in the black-tie aesthetic.

Kelley O'Hara also donned a pair of pants, but went in a more glittery direction. The midfielder wore sequined high waist pants with a cropped tank top — spaghetti straps and all.

There was even a jumpsuit on stage. Lindsey Horan donned a red spaghetti strap jumpsuit, complete with a wide leg silhouette.

From Rapinoe's leather shorts to sheer tuxedos to colorful jumpsuits, the USWNT brought forth a bold style to the ESPY red carpet.

More like this
10 Flashiest Looks From The 2023 Critics' Choice Awards
By Allie Fasanella
Phoebe Dynevor Serves ‘Bridgerton’ Underboob In Stunning Floral Gown
By El Hunt
All Of Doja Cat’s Wildest Paris Couture Week Looks
By Dominique Norman
30 Of Kendall Jenner’s Best Runway Looks To Date
By Dominique Norman
Get Even More From Bustle — Sign Up For The Newsletter
From hair trends to relationship advice, our daily newsletter has everything you need to sound like a person who’s on TikTok, even if you aren’t.