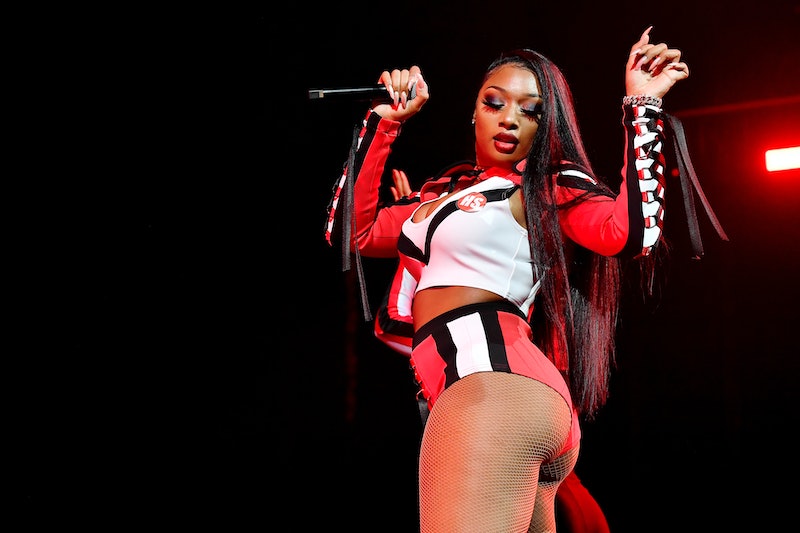 Megan Thee Stallion doesn't need anybody's permission or approval, but that doesn't mean she's going to take any hypocritical judgments laying down. Megan Thee Stallion called out critics of her sexual lyrics in a new interview, saying that some people hold her and other female rappers to a different standard than their male counterparts — a.k.a. a completely true statement. And she has no intention of censoring herself to make other people comfortable.

In a recent interview, the rapper went after the double standard between male and female MCs when it comes to rapping about sex, drugs, and other controversial topics. “A man can be as mediocre as he wants to be but still be praised,” she explained to Marie Claire. “A man can talk about how he’s about to do all of these drugs and then come and shoot your house up. But as soon as I say something about my vagina, it’s the end of the world?”

Needless to say, she doesn't buy that argument. “What are you really mad about?" she asked. "You cannot be mad about me rapping about sex.” Her theory is that the sexist criticism results from "something deeper," mainly that her lyrics come from the perspective of female pleasure, not the pleasure of men. "I’m rapping about you making me feel good," she said. "I’m not rapping about licking on you. No, you’re going to do what I told you to do... Sometimes it’s overwhelming to some men. They can’t handle it, they get a little shook, they get a little scared."

These double standards have been a problem for female rappers for a long time. In July 2019, Cardi B condemned Jermaine Dupri for deeming Megan, Nicki Minaj, and herself as just "strippers rapping" and accusing them of "rapping about the same thing," implying sex.

"So I have seen a lot of people write that nowadays female rappers only talk about their p*ssy and sh*t," Cardi said during an Instagram Live stream, as per Refinery29, noting that female MCs who don't rap about sex are often given less attention than those who are willing to create NSFW songs. "Don’t blame that on us when y’all not the ones who are supporting them,” she declared.

Despite the hypocrisy, Megan does see an upside of women being held to an unnecessary standard. “I know that women are powerful," she told Marie Claire. "I know that we are out here birthing people. I know that we are out here running sh*t, so I can’t even be mad at you for thinking that we should be held to a high standard. We’re the ultimate beings." And she has a message for men who can't handle that sentiment. "I’m not going nowhere, so get used to it.”