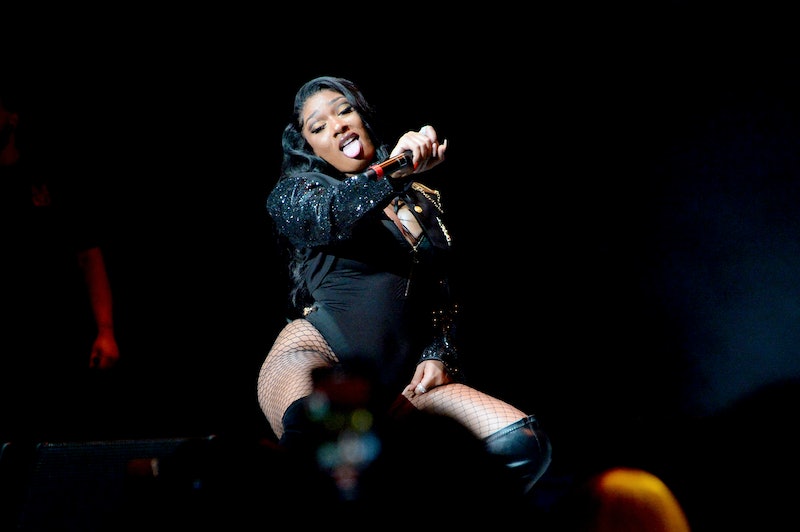 Last September at NYFW, Megan Thee Stallion sat front row at the Coach show seated next to Anna Wintour. Two months later, she’s taking the reigns for the brand as an ambassador for the holidays. Megan Thee Stallion’s Coach campaign is the rapper's first fashion campaign ever, and it couldn't be more fire or festive.

Megan is officially leaving Hot Girl Summer and fall behind for Hot Girl Winter in Coach’s “Wonder For All” Holiday Campaign. In the video, you'll see the likes of Spike and Tonya Lee, Ru Paul's Drag Race Season 8 winner Bob The Drag Queen, Kate Moss, Yara Shahidi, and others knocking on the door of their neighbor for a festive gathering in a New York City Brownstone. As the celeb-filled party piles in, the rapper is already sitting up on her throne — which happens to be a ceramic horse straight out of a carousel — while dripped in a black vinyl jacket and one of Coach’s Tabby Shoulder Bags.

The campaign also features a series of shorts that highlight the cast mentioning their favorite holiday dishes, songs, and movies. In one campaign clip, Megan rocks the same black look and a long ponytail explaining her love for chocolate chip cookies. “It’s probably supposed to be gingerbread men,” she said in the video as she breaks part of the set, “Oops! But yeah chocolate chip cookies.”

According to a Coach press release, the print campaign was shot by Juergen Teller, who worked on his first campaign for Coach earlier this fall. This holiday campaign seeks to capture the diverse cast in a joyful setting on the Upper West Side with specific scenes highlighting their personalities. Between Bob The Drag Queen’s authentic humor and Megan’s own ceramic stallion to represent the horse from Coach’s horse and carriage symbol, the campaign helps to uplift diversity as well as each celebrity’s identity.

Megan Thee Stallion is coming up fast in the fashion world, and after making summer, fall, and now winter her Hot Girl seasons, it seems teh rapper is slowly making her movement a year-round party.

More like this
Camila Cabello Wore A Pearl Bra On The 2023 Grammys Red Carpet
By Alyssa Lapid
Lizzo Wore A Spicy Bustier Gown On The 2023 Grammys Red Carpet
By Alyssa Lapid
Taylor Swift’s Glitzy Grammys Look Is Giving Midnights
By Alyssa Lapid
This 'One Tree Hill' Wardrobe Error Is Going Viral On TikTok
By Brad Witter
Get Even More From Bustle — Sign Up For The Newsletter
From hair trends to relationship advice, our daily newsletter has everything you need to sound like a person who’s on TikTok, even if you aren’t.