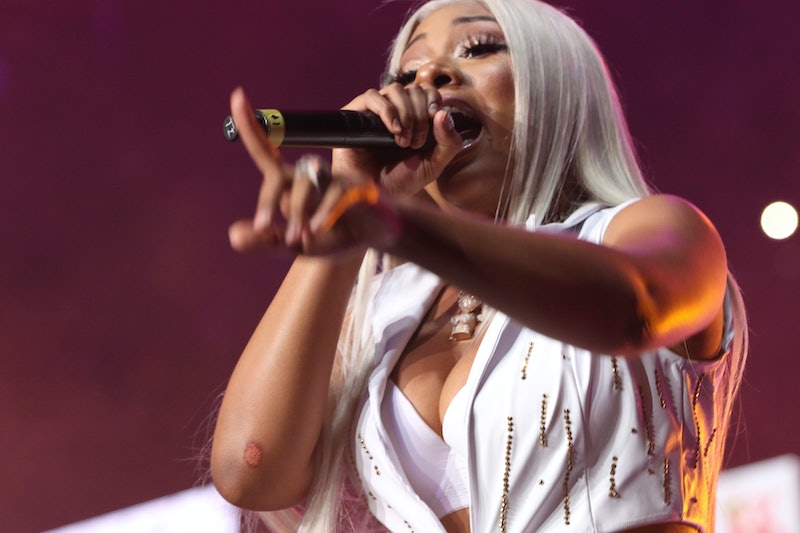 If you’re on the internet at all, you probably know that you’re smack dab in the middle of a #hotgirlsummer. The phrase comes from 24-year-old Houston, Texas, rapper Megan Thee Stallion, whose alter ego is "Hot Girl Meg" — a fun-loving, college, partier persona. According to Vox’s explainer of hot girl summer, Megan also calls herself “H-town hottie” or ‘Hot Girl Meg,” while her fans are called “hotties.” And in her songs (“Cash Sh*t” and “Hot Girl”) and in her social media presence, Megan is constantly re-affirming how being a “hot girl” is intrinsic to her brand, her fan base, and her art. (Still, the phrase "hot girl summer" doesn't actually appear in one of Megan's songs, for what it's worth.)

Since then, people on the Internet are using the phrase "hot girl summer" to describe their ideal summer, so much so that it's being referred to as a meme, with brands getting in on it, too. But as with anything, when brands start co-opting the internet adores, it becomes indelibly cringe-inducing — and ruins hot girl summer for the rest of us. For Black women in particular, the co-opting feels particularly gross; "hot girl summer" was created by a Black woman rapper and her fan-base which is made up of a lot of Black women. When brands use the term without understanding it fully, it feels like pandering, and erases the freedom and positivity that hot girl summer is supposed to represent. Which is why I have to ask: can't we just leave hot girl summer alone?

In late June — peak hot girl summer season — Megan sat down with The Root and said that the term was rooted in positivity: “It’s just basically about women — and men — just being unapologetically them, just having a good-ass time, hyping up your friends, doing you, not giving a damn about what nobody got to say about it. You definitely have to be a person that can be the life of the party, and, y’know, just a bad b*tch.”

Hot girl summer is also inclusive by nature. One fan told Elite Daily that it was a revolutionary concept: “To me, it’s about reclaiming your summer and your body in a season that’s usually fraught with body image issues, harassment, and the way the male gaze can quickly turn dangerous — especially for femmes and trans women," Natsumi, 24, said. "A 'hot girl summer' is for everyone who had to stop feeling carefree in order to feel safe. And in that way, it’s fun, defiant, sexy rebellion.”

Megan’s fan base also took to social media to post their own ideas of what hot girl summer means to them. For some, it means celebrating being a Black woman. For others, it means celebrating success in typically male-dominated fields, like professional soccer and hip-hop. Because if World Cup champion Megan Rapinoe and Megan Thee Stallion aren't having a hot girl summer, who is?

But of course, because Black women can’t enjoy or share our nice things in peace, companies immediately pounced on the cultural moment, trying to capitalize on hot girl summer one cringe-worthy sponsored post at a time. The litany of cornification was pretty extensive. Wendy’s claimed its lemonade was the “official drink of hot girl summer.” Forever 21 sent out a marketing email with the subject line, "Feelin' Hot Girl SUMMAH." Not wanting to be left out of the fun, Maybelline tweeted: “Summer 19 in three words: hot girl summer. PERIODT!” To which I said “LORDT, make it stop.” But it didn't stop. Because for some reason, after this, the DuoLingo owl (who, I cannot stress this enough, is a cartoon owl) also posted some pictures of its Hot Girl Summer.

My best friend and I had a great time laughing at how thoroughly these brands embarrassed themselves by clinging desperately to Black culture instead of coming up with their own original ideas. And a lot of other people tweeted similar feelings. But underneath our laughter, there’s real annoyance, anger, and hurt.

The pandering, the appropriation of Black speech, the use of Megan’s work without paying her is all especially egregious when you consider that some of those brands have been criticized for past incidents of alleged racism. When all that sinks in, this corniness stops being funny. There is an insidious pattern on the internet, where young Black people create the memes that bolster sales and TV ratings, but don’t get compensated or even recognized for their creativity and work. Fortunately, Megan has assured her fans that she is in the process of trademarking “Hot Girl Summer” to prevent any brands from capitalizing on her work. Although, given that rapper Cardi B was denied her trademark application for her signature catchphrase, it’s entirely possible that Megan’s application will also be denied. Which would allow these brands to keep profiting from her for free.

It's clear that what Megan and her fan base created something amazing with Hot Girl Summer, is something empowering and fun and inclusive. When brands (and people unfamiliar with Megan's music at all) attempt to co-opt this creation, they dilute it because they don't understand it. And it kind of taints the whole thing, giving it a vibe that isn't just corny as hell, but can also feel exploitative.

In the end, Hot Girl Summer is supposed to be about positivity, good vibes, and doing what you want despite what other people think. It's not supposed to be about doing what you want despite the hurt that you may be causing other people, which is a lesson some of these brands should learn. For us to continue having a truly great Hot Girl Summer, the brands should really just leave it alone.