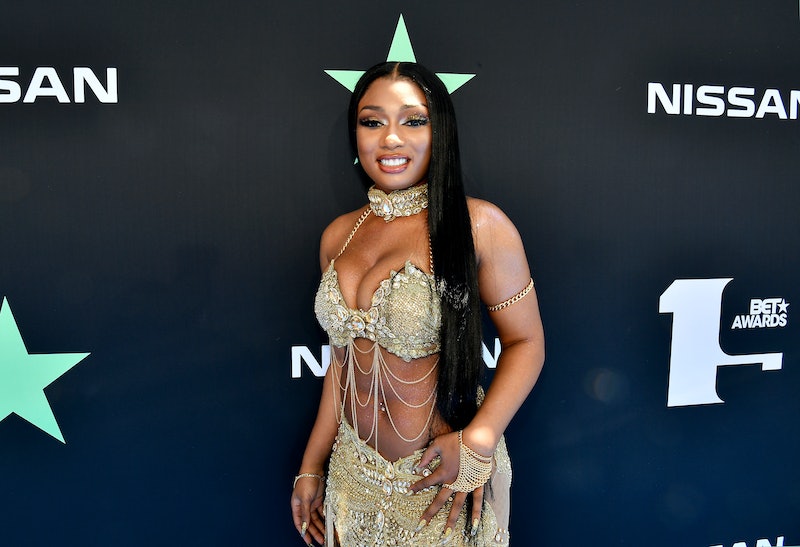 If you haven’t caught wind of the wildly popular Hot Girl Summer movement that even makeup brands are hip to, then allow rapper Megan Thee Stallion to explain. As her self-proclaimed “Hot Girl” persona would have it, Megan Thee Stallion graces Paper Magazine’s digital cover. And the H-Town hottie has landed in the digital issue rocking an icy hot fit. Plus, the rapper just released a tune to celebrate the season of hotties.

Paper unveiled its digital cover on Aug. 8, where Megan posed in a hot and cold theme. With half of her hair red and the other half white, Megan’s cover is where ice meets the H-Town Houston hottie. Megan rocks a form-fitting blue jumpsuit with her hair laid and fringe banged while her icy hand holds a box of matches and her hot hand holds a lit match.

The rapper’s makeup was also an eye-grabber that stayed in tune with the icy hot theme thanks to the hands of beauty guru and YouTuber Alissa Ashley. The icy half of Megan’s face is made up with a simpler eye look with a winged out eyeliner and blown out lashes. However, the hot side is covered with red eye makeup to match the color of one side of her hair.

"REAL HOT GIRL SH*T!" the publication wrote on Instagram. "Miss Megan @theestallion, who gave you all #hotgirlsummer, taps into her inner anime girl for our latest HOT cover."

The cover doesn't just lineup with the theme of fire v. ice, but also two of Megan's personas: Hot Girl Meg and Tina Snow, the latter also being the title of her second mixtape featuring hit song "Big Ole Freak".

In an interview with The Source, Megan explained that Tina Snow is the boss alter ego of herself.

"She’s the pimp and the mack," Megan said. "Tony Snow was one of Pimp C’s many aliases, and Pimp C is my favorite rapper. He just makes me feel so cool and so laid back. I get into my act when I listen to Pimp C so I turn myself into Tina Snow, his opposite. When people listen to me I want them to feel cool as hell. I want them to get in their act when they’re listening to Tina Snow."

The cover also might have payed tribute to Megan's love of anime, as the rapper posted the original cover photo to her page with the caption "Real Hot Nerd shit TODOROKI TINA MADE IT IN @papermagazine ON THE MF DIGITAL COVER."

Black and brown people aren't often recognized in anime or manga, but with rappers like Megan bringing attention to her own fandom, she reminds fans that the biggest blerds (read: Black nerds) can be the most empowering.

Megan Thee Stallion is on the rise of stardom. Despite her most authentic self being two different alter egos, both encourage women, and people overall, to be the life of the party wherever they go while remembering to live a Hot Girl Summer lifestyle all year round.

More like this
How To Get Wednesday's "Soft Goth" Lip, Straight From The Makeup Designer
By Audrey Noble
Jenna Ortega's Hair Routine Occasionally Involves Washing Out Fake Blood
By Olivia Rose Ferreiro
8 Gorgeous Hair & Makeup Moments From The 2022 American Music Awards
By Audrey Noble
This Week’s New Makeup Releases & More Beauty Headlines
By Audrey Noble
Get Even More From Bustle — Sign Up For The Newsletter