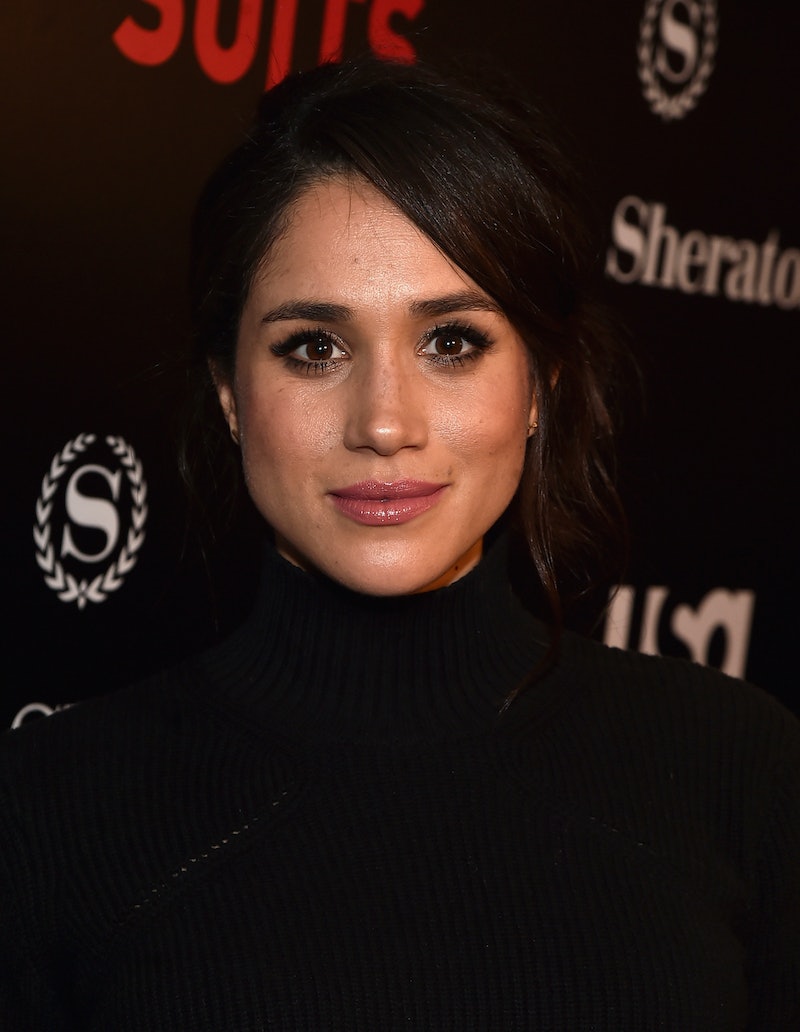 News flash: when a famous woman begins dating a noteworthy individual that doesn't mean she or her accomplishments should become insignificant. It's something Meghan Markle has been dealing with since she began seeing Prince Harry and, yes, the fact that people are more interested in her personal life rather than her career is still frustrating. This is something that occurred during Suits' ATX Television Festival panel held on Sunday. According to DailyMail.com, Meghan Markle avoided a Prince Harry marriage question.

Apparently, the 35-year-old was asked if she one day hoped to marry Harry and to that she responded, not with words, but by only giving a smile. Good for her, because I wouldn't have dignified that question with an answer, either. Her relationship with Harry isn't anyone's business. According to DailyMail.com, the website also approached Markle after the panel and inquired about the actor's "plans for the future," but she did not comment. I mean, does anyone really think the actor is willingly going to offer up details about her relationship with one of the most famous royal family members in the world?

It's important to remember that Markle is more than her relationship with Harry. She isn't just "Prince Harry's girlfriend, possibly soon-to-be fiancée," but rather a talented actor. At ATX, she was at a panel for Suits, aka her job. That should be her first and only priority when at this type of event. Markle plays such a powerful and influential woman on the show, which is exactly what she should've been discussing rather than avoiding questions about Prince Harry.

I'm sure Markle understands now that she is even more in the spotlight for dating a prince (and an extremely famous one, at that) the public and the media are curious. That said, I have a feeling she would like to talk about other things, like being an actor and all of her other accomplishments.

Luckily, Markle did get a chance to praise her Suits character, Rachel, at the television festival. For her, Rachel is an admirable woman, who has worked her butt off to become a success in law. "I am so happy... she’s worked so hard and I love that, as a role model, how she’s been crafted to balance it all and now have this place at the firm where she really knows her standing and her office isn’t just because she’s a good researcher, it’s because she’s an associate." Markle added about Rachel, "She’s really earned that spot."

Anyone who is a fan of the USA series, myself included, recognizes how vital Rachel is to the drama and to the other characters. This is exactly what Markle should be discussing, especially at TV panels, not her personal life or if she hopes to become a princess one day.

Again, I totally get that it's a huge deal that Markle is with Harry, but that doesn't mean everyone should forget that she is so much more than that. Her boyfriend doesn't completely define her.

Markle's friend Priyanka Chopra gets it. During a May interview with Wendy Williams, the Baywatch actor was asked about Markle and Harry. Williams said, "Your friends with Meghan Markle, Prince Harry's girlfriend." To that, Chopra beautifully responded, "Also, Meghan Markle, actress, Suits, her achievements. Just saying." Boom. Mic drop.

Basically, everyone take after Chopra and remember Markle deserves more than the "girlfriend" label and only receiving attention for her future with Prince Harry.