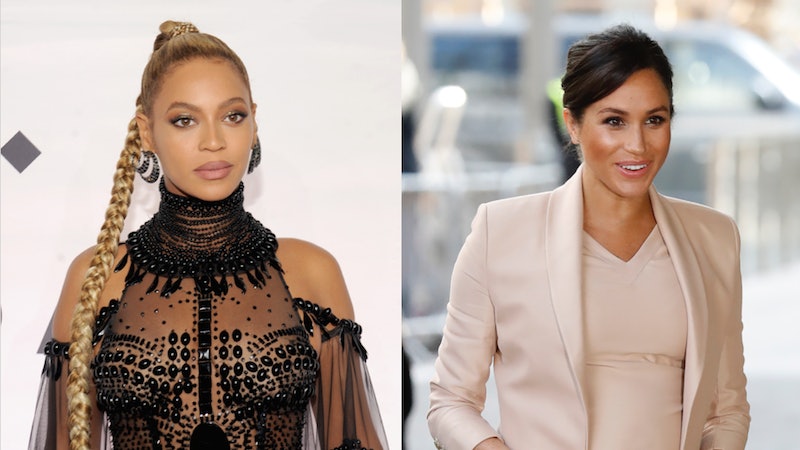 Music and British royalty collided on Sunday, July 14 when Meghan Markle and Beyoncé met at The Lion King premiere. It was a meeting arguably more hyped than the actual live-action movie itself, which is definitely saying something. It was previously reported by various outlets that Markle and Prince Harry would attend the premiere, and naturally, fans began plotting possible interactions between Queen Bey, who voices Nala in the film, and the Duchess of Sussex.

Luckily for fans (and humanity as a whole, tbh), the assembly of Beyoncé & JAY-Z and the Duke and Duchess of Sussex was well documented. Daily Mail reporter Rebecca English captured a front row perspective on the action, which she shared in a thread on Twitter.

From the start of the night, English posted a video of Markle and Prince Harry arriving, tweeting, "The Susssxes have beaten Beyonce." Like clockwork, a video of Bey and JAY-Z's arrival, cushioned by their security team, was uploaded. English tweeted, "There's honestly more security around Beyonce and Jay-Z than there is around the royals!" The reporter continued to give fans the insights they crave by posting up-close video of the two power couples meeting face-to-face.

Beyoncé sported a yellow gown with a thigh-high slit, while Markle opted for a black cocktail dress with a sheer top. In the initial video of the couples meeting, Markle gives both of the Carters warm hugs before chatting. A second video from English is captioned, "Lots of baby chat between Harry and Meghan and Beyonce and Jay-Z." (When is an Archie, Blue Ivy, Sir, and Rumi play date on the books??)

This isn't the first time these two royally obsessed-over couples have crossed pop culture paths. During Black History Month, the Lemonade artist commended Markle's "charitable work in communities of color," which she noted "began years before becoming the Duchess of Sussex." That same month, Bey and JAY paid tribute to Markle during their taped BRITs award acceptance speech for Best International Group. The married musical duo stood in front of a Mona Lisa-style portrait, which resembled the Duchess of Sussex. Everyone promptly lost their minds, and anticipation for this long-overdue union began.

Essentially, Twitter lost its mind over the Beyoncé and Markle interactions. One lip read fans seemed to pick up on? When the Duchess first greets Bey, she seemingly exclaims, "My princess!," which is bound to be immortalized in a meme any second now. Users were claiming that seeing these two iconic ladies together was accomplishing everything from curing depression to inspiring tears.

BuzzFeed reporter Mark Di Stefano pointed out that Markle and Bey's meeting comes on the heels of her day at Wimbledon with Kate and Pippa Middleton, tweeting, "Is the internet going to be ok?" As excited as Beyoncé evidently was to meet Markle, what with her painted tributes to her and all, it's clear from the video that the Duchess of Sussex was fan-girling just as hard.

In short, The Lion King premiere could not have been a more ideal spot for two queens to meet. It was the "Circle of Life," and fans could plainly "Feel the Love Tonight" between the two.

Sending prayers to Instagram's server now if the Duchess of Sessex or Queen Bey decide to share a pic from the evening. We'll be waiting.

More like this
Prince Harry Incorrectly Recites Christina Aguilera’s “Genie In A Bottle” Lyrics
By Jake Viswanath
Everything To Know About The 2023 Grammy Awards
By Jake Viswanath
Beyoncé & Blue Ivy Performed A "Brown Skin Girl" Duet At Her Private Dubai Concert
By Brad Witter
I Read Prince Harry's 'Spare' So You Don’t Have To: 11 Highlights To Know
By Marina Watts
Get Even More From Bustle — Sign Up For The Newsletter
From hair trends to relationship advice, our daily newsletter has everything you need to sound like a person who’s on TikTok, even if you aren’t.