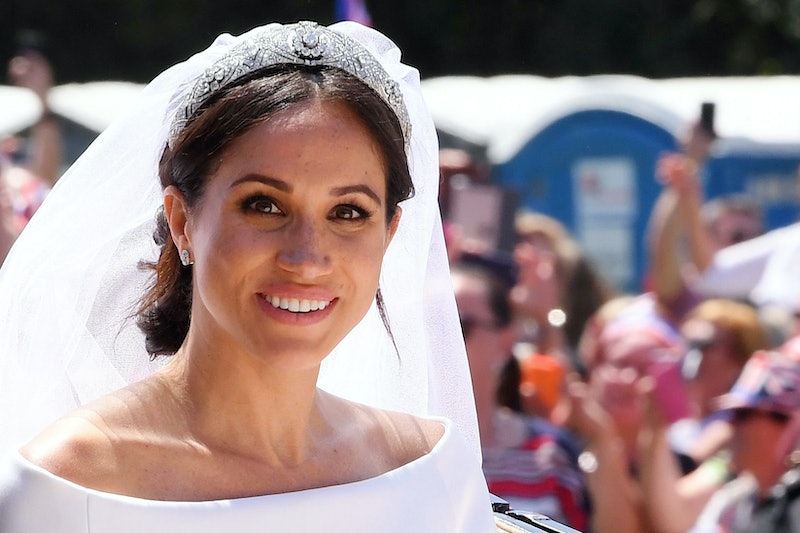 It's not everyday that you get to go jewelry shopping, let alone for diamond tiaras, but being part of the royal family certainly has its perks. Meghan Markle explained that before becoming a Duchess, she'd been Mia Thermopolis in true form, picking out her wedding tiara with the Queen. If only

The royal wedding dress and its 3,900 hours of detailing are currently turning heads at the Windsor Castle exhibition, A Royal Wedding: The Duke and Duchess of Sussex, where the couple's commentary on their wedding day is featured.

"An incredibly surreal day", she described her meeting with the Queen for some diamond-encrusted head pieces. Queen Mary lent the Duchess her diamond and platinum bandeau tiara for the big day, which is also exhibited at Windsor Castle. Does anybody else feel like there just has to be a hidden tiara closet somewhere in that enormous palace?

The exhibition commentary revealed that Harry accompanied Meghan for the visit, which kind of strays from that iconic "girls only" closet scene. "I shouldn't have really even been there," he admitted, "but such an incredible loan by my grandmother, it was very sweet," he said. But in polite Prince Harry fashion, he said the chosen headpiece for the wedding was "the one that looked the best... without question".

The Duchess described that she wanted to remain consistent with a look that was "incredibly timeless". "When it came to the tiara on the day, I was very fortunate to be able to choose this gorgeous art deco style bandeau tiara," she said. Leave it to Meghan Markle to make something classic look modern.

One by one as she tried them on, but she continued in the recording that the bandeau tiara stood out the most.

"I think it was just perfect because it was so clean and simple - and also to that point, an extension of what Clare and I had been trying to do with the dress which was have something that could be so incredibly timeless but still feel modern."

The tiara sits alongside Markle's Givenchy wedding dress for the exhibition that continues into early January, and in the exhibition you can also find Prince Harry's frock coat that he wore on their May wedding.

"I chose the frock coat as a uniform, with permission from my grandmother, because I think it's one of the smartest Household Cavalry uniforms. It's one of my favorites, and I was very fortunate to be able to wear that on the day."

Despite having the entire world witnessing her nuptials, Markle wanted to find ways in the details to make it as special as possible.

"We knew how large the scale of the event would be, so in making choices that were really personal and meaningful, it could make the whole experience feel intimate."

No one can really imagine what that sort of wedding planning would be like, but luckily for those that watched the royal wedding magic unfold, it was quite perfect for the likes of a princess.