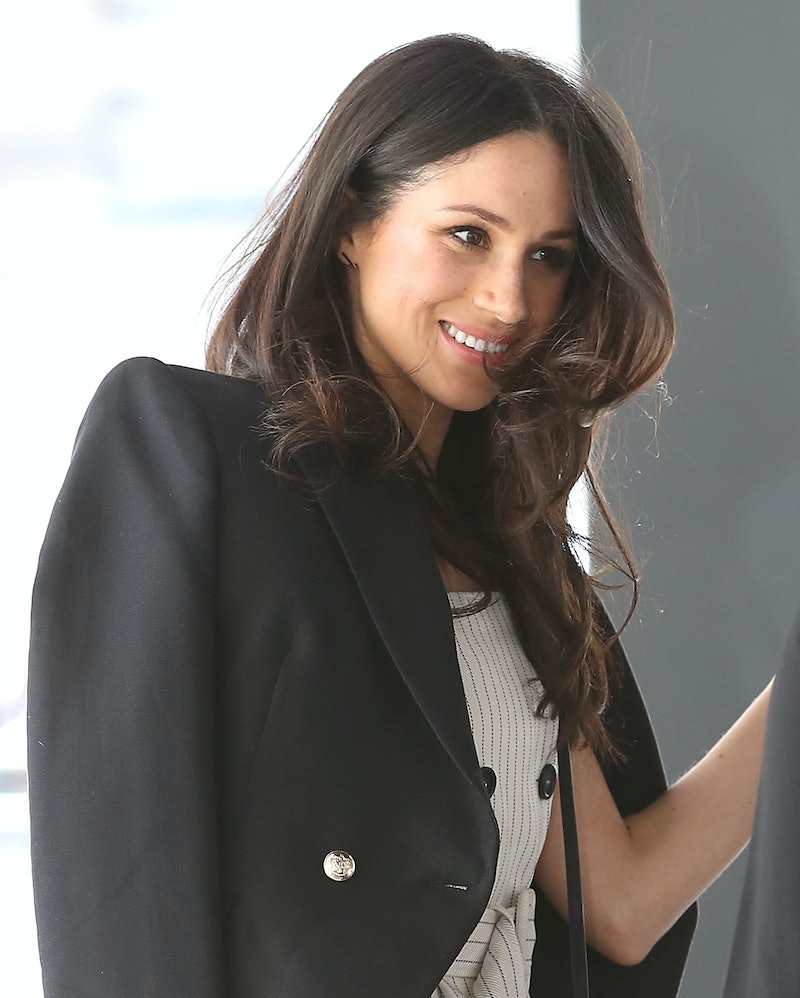 You might be obsessed with what the royals are wearing, but sometimes it's about what they're not wearing. Meghan Markle didn't wear pantyhose with her dress, so you can add that to the list of royal fashion rules that she's broken lately. Bearing your unclothed royal legs isn't necessarily a crime, but it does go against the Queen's fashion rules.

In the latest edition of "Meghan Markle broke a rule," the soon-to-be royal decided not to wear tights with her dress — yet again. She wore a gorgeous floral green Self Portrait dress and a black Alexander McQueen blazer, according to StyleCaster. She completed the look with a pair of black suede pumps.

The "problem" wasn't with what she wore, but what she didn't wear. As the publication pointed out, she didn't wear tights with her dress. According to fashion rules, women must wear something covering their legs at all times when in public. Markle either decided that she didn't want to or no one filled her in on the rule yet.

“You never see a royal without their nude stockings,” royal expert Victoria Arbiter told INSIDER. "I would say that’s really the only hard, steadfast rule in terms of what the Queen requires.”

This isn't the first time that Markle decided to skip the tights. In fact, there aren't many times that she has worn something covering her legs. Unless, of course, you could the killer Alexander McQueen pantsuit that she rocked at the Endeavour Fund Awards. Other than that, she's decided to go sans tights with almost all of the dresses and pantsuits that she's worn.

Markle's first time breaking the royal fashion rule regarding tights was he very first public appearance. She stepped out with Prince Harry to announce her engagement in a gorgeous white jacket, a dress, and, as you might have guessed, no tights.

"You never see a royal without their nude stockings. Meghan, from what I can see from the engagement photographs, it doesn't look like she was wearing tights or stockings," Victoria Arbiter told INSIDER. "I would say that's really the only hard, steadfast rule in terms of what the Queen requires."

As her first public appearance, people thought maybe she just didn't know the rule. Now, it's more likely that she just doesn't like them.

This isn't the only time that Markle has dodged the royal fashion rules, either. She's been seen rocking a messy bun on numerous occasions. While Twitter loves the look, but it does go against the Queen's rule to look polished at all time.

According to People, all royals must have their hair sleek at all times. Hence why you always see the Queen with perfect hair and Kate Middleton with sleek buns or perfect blowouts.

Let's also not forget the time that she wore a completely sheer topped dress for her engagement photos. She proved that not only is she the most fashion forward royal of them all, but she's also willing to push the boundaries when it comes to how she can and cannot dress.

There's no word on whether or not the Queen has a say in how Markle dresses or if she's had any sartorial conversations with the soon-to-be royal.

It's quite possible that Markle is soaking in all the un-covered leg time that she can before the wedding. It will be interesting to see if she continues to go sans tights after the big day or if she conforms to royal fashion rules. Ultimately, the choice will be Markle's, so all eyes will be on her legs for the royal wedding and beyond.