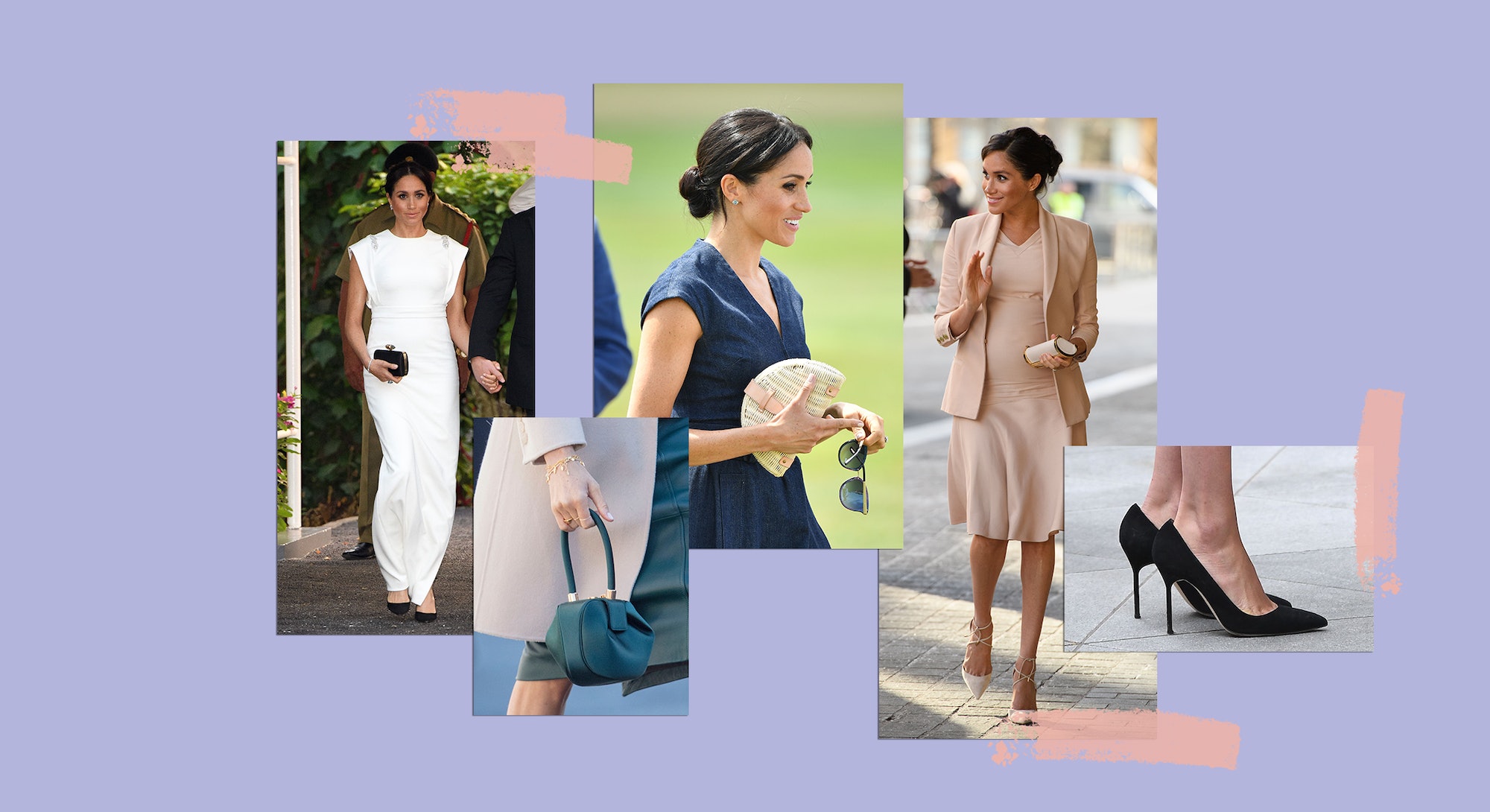 Sometimes people think Christine Ross is Meghan Markle. It's not because she resembles the Duchess, or holds a similar title. In fact, Ross is an editor and mother living in Washington, approximately 4,700 miles from London. She's also one-half of the two-person team behind Meghan's Mirror, a popular Meghan Markle fashion website Meghan's Mirror. Meghan Markle-focused fashion blogs (and yes, there are a lot), the site posts photos of Meghan's outfits and then lists who makes each piece of clothing, usually complete with shoppable links for readers. It attracts those who are Meghan-obsessed in a good way — and also, inevitably, a bad way.

"We have been accused more than once and quite seriously of being Meghan Markle," Ross tells Bustle in a phone interview. "They think that Meghan runs the site and [is] profiting off her own fashion, and that’s the only way we know [what] she’s wearing so quickly."

Of course, this isn't true, Ross says, explaining that the Duchess has "nothing" to do with the running of the site. "If I were Meghan, don't you think we would have everything IDed? Like, don't you think we would know where she got that stupid coat the other day?" Ross laughs, referring to the collective times they just haven't been able to find the exact piece Meghan is wearing.

While it may be impossible for Meghan's Mirror to identify every single piece of clothing the former Suits star wears, the founders pride themselves on sourcing almost everything with easy-to-shop links. The site has archives of every single outfit Meghan has worn in public since 2013. That's almost 1,000 pieces of clothing, if you're wondering. And with 1,000 pieces of clothing comes virtually countless opportunities for readers to shop affiliate links — and for Meghan's Mirror to make some serious cash.

"The main way we make money is through our affiliate network, and secondary would be ads or partnerships with brands," Amanda Dishaw, the other co-founder of Meghan's Mirror, says in a phone call.

Dishaw wouldn't share exact statistics on how much the site makes from affiliate sales alone, but she did note something that Ross also echoed: Anything Meghan wears that is remotely affordable sells out almost immediately. When it comes to jewelry, for example, Ross says that anything less than $500 goes out of stock.

Ross says what the actual item of clothing is rarely matters, as long as it's affordable. "She recently wore this green silk blouse from & Other Stories, and it ... was not the most practical piece, but people could afford it. So it sold out immediately," Ross recalls.

While Ross and Dishaw started their first royal blog (What Would Kate Do) together in 2012, it was Dishaw who really pushed for the two to start a Meghan Markle-focused blog, even before she was officially part of the royal circle. Meghan's Mirror was launched in October 2016, just before Prince Harry publicly confirmed the relationship via a public plea for the press to stop harassing Meghan.

"On that day, traffic on the blog spiked tremendously," Dishaw says. "People were like, 'Wait a second, it's not just rumors. There's something here. And yeah, the rest is history."

Meghan's Mirror may be the most formidable Markle fashion blog on the internet, but it's far from being the only site. Like the founders of Meghan's Mirror, Susan Courter started the blog and Instagram account for What Meghan Wore thanks to inspiration from a Kate Middleton fashion site.

"I had been friends with Susan Kelly, who runs What Kate Wore, for several years," Courter says in an interview, noting that she was also already a big fan of Suits. "So I reached out to her and I said, 'I think there’s something here, I would like to use the name What Meghan Wore ... as a sister [site] to What Kate Wore. Are you OK with that?"

Kelly said yes, and now three years later, What Meghan Wore has almost 30,000 followers on Instagram and a dedicated online audience. Courter, who has a full-time job outside of What Meghan Wore, notes that she spends up to 10 hours a week just on the site and its social media. While Courter explains that the site does make money through things like affiliate links, all of that money goes right back into the site for things like image licensing. Kelly runs What Kate Wore as a full-time gig, but Courter says What Meghan Wore is just a passion project for her right now.

"I love it," Courter says, explaining that she is in constant communication with Kelly about the Meghan and Kate websites and what they can do with them next. "I mean, if you saw our phone bill or the amount of hours we were on the phone, it’s ridiculous."

Courter has been following the royals since Diana, and is committed to protecting how the royals (and Meghan in particular) are discussed. What Meghan Wore has a 655-word-long comment policy that outlines what is unacceptable when it comes to commenting about Meghan's looks.

"This is not the place to compare Meghan and other members of the royal family in a pejorative fashion," one section of the policy reads. "Statements like 'Meghan clearly put Kate to shame at this engagement' or '_____ needs to take a lesson from _____' doesn’t enhance the dialogue, or add to our knowledge of Meghan’s style."

In fact, in conversations with Courter, Ross, and Dishaw, a common thread in the conversations is that all are extremely sensitive to and aware of the hypercritical nature of the discussion around Meghan.

But What Meghan Wore and Meghan's Mirror are just two of dozens upon dozens of Meghan-focused websites. Elizabeth Vollman, for example, lives in Australia and runs Meghan's Fashion, another popular site. Like Courter, Vollman tells Bustle over email that Meghan's Fashion is a hobby primarily. She also says that it's something that she has used to find a "community."

Over the course of phone calls and emails with these women, you begin to realize that these discussions are a lot like talking to friends about any other job — discussing the day-to-day duties, the logistics of making money, the difficulties of navigating other people's opinions. But somewhere in all the conversations, it dawns on you that these women's jobs are, essentially, knowing Meghan Markle's every move. And that Meghan Markle is a person who, though she was once a blogger herself, never exactly asked for there to be a blog about her run by someone else. When this point is raised to Dishaw, she agrees that it can sometimes be "a little awkward when ... you really boil [it] down and think about it"

"It's sometimes easier to think of her as something that we cover from a journalistic perspective, and forgetting that there's a human behind it who's making all these decisions," Dishaw says.

But Meghan — and in turn, all of the Meghan blogs — appeal to people because she is human. Behind all the glamour and royalty, it's still easy to see a human who maybe, even if it just a little bit, reminds you of yourself. And maybe even of a better version of yourself.

"We have many readers who have come to us and said, 'Because Meghan volunteers and works so passionately with animal rescue societies, I went to my local animal rescue society and started volunteering,'" Dishaw says. Meghan's speech on the Australia royal tour about women's empowerment even inspired one of the Meghan's Mirror team members to get involved with local politics in her home state of California, Dishaw notes.

All the site-runners agree that fashion can be important and that, of course, it can be fun. But the conversation about Meghan always goes back to the idea that she is a role model who, even married to a literal prince, still manages to seem relatable. Among all of the women who manage these blogs and websites, there is a deep sense of admiration, respect, and appreciation.

So when I ask some of them what they would ask Meghan if they ever met her, it doesn't surprise me when a couple begin their answers by noting what an inspiration she is.

"I think she has a lot to offer and there’s so much more that she’s going to do [and] achieve," Courter says, noting that she'd be interested to find out what the Duchess hopes to achieve in the next year.

Ross tells me she'd love to know if Meghan reads Meghan's Mirror — and then quickly follows up her answer by telling me that is has been confirmed to her and Dishaw that Meghan does actually read the blog.

Regardless of whether or not the websites have really caught the attention of the Duchess of Sussex, one thing is for sure: If she is in fact somewhere reading these blogs, she'd just be one in millions of other readers. Yes. Millions.

While Dishaw didn't share monthly or yearly traffic statistics for Meghan's Mirror, she tells me that in peak times (moments like the Meghan and Harry's engagement announcement, wedding, or Australia and New Zealand trip, for example) Meghan's Mirror can see anywhere from "500,000 to 1 million hits a day."

"When I tell people these numbers they're like, 'Are you kidding me? There's that many people who are interested in what Meghan Markle wears?'" Dishaw says. "And the answer is yes, yes there are."