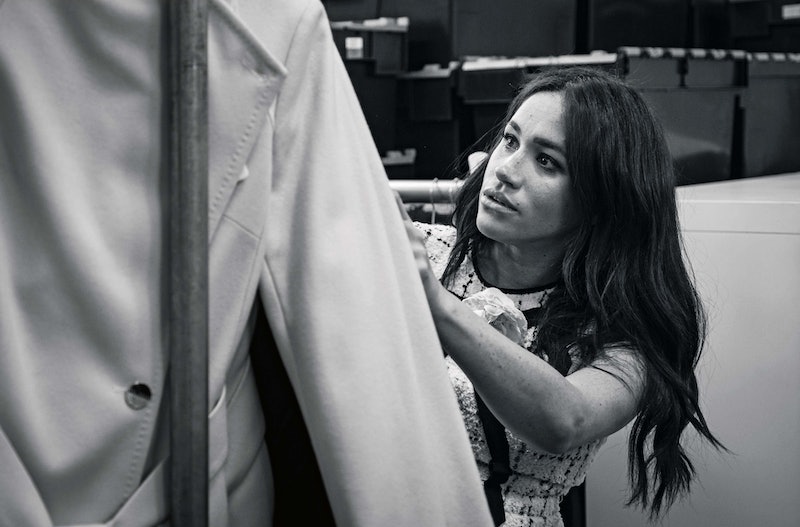 The September issue of British Vogue is widely considered as the most important issue, as The Guardian notes, and this year will mark the first time that the issue has been guest edited. So, what better way to mark the special occasion than to have Meghan Markle guest editing British Vogue? Since January this year, the Duchess of Sussex has worked on the issue that focuses on “Forces for Change” — women who've had (and are continuing to have) a lasting impact on the world.

The cover of the issue features 15 women who Meghan describes as “Forces for Change”, along with an empty slot that will make it seem as though you’re on the cover when you hold the magazine, so “you see yourself as part of this collective,” as is mentioned in the caption announcing the issue of @sussexroyal’s Instagram.

You’ve probably already recognised the majority of the incredible women on the cover, but here’s a rundown of the “Forces for Change”:

“These last seven months have been a rewarding process, curating and collaborating with Edward Enninful, British Vogue’s editor-in-chief, to take the year’s most-read fashion issue and steer its focus to the values, causes, and people making impact in the world today,” the Duchess said via Vogue.

“Through this lens I hope you’ll feel the strength of the collective in the diverse selection of women chosen for the cover as well as the team of support I called upon within the issue to help bring this to light. I hope readers feel as inspired as I do, by the ‘Forces for Change’ they’ll find within these pages.”

While the issue will focus on the work and thoughts of those featured, it will also include an interview between Meghan and Michelle Obama, a conversation between Prince Harry and Dr Jane Goodall, and “inspirational articles written by Brené Brown, Jameela Jamil, and many others,” the Insta caption reads. The issue will also feature pieces from “grassroots organisations and incredible trailblazers working tirelessly behind the scenes to change the world for the better,” as the caption continues.

“To have the country’s most influential beacon of change guest edit British Vogue at this time has been an honour, a pleasure, and a wonderful surprise,” Enninful said via BBC News. “As you will see from her selections throughout this magazine, she is also willing to wade into more complex and nuanced areas, whether they concern female empowerment, mental health, race or privilege.”

“From the very beginning, we talked about the cover — whether she would be on it or not. In the end, she felt that it would be in some ways a ‘boastful’ thing to do for this particular project. She wanted, instead, to focus on the women she admires.”

The September issue of British Vogue will be available to buy on Friday, August 2.

More like this
Oprah Winfrey Revealed Her Hopes For Prince Harry & The Royal Family
By Maxine Harrison
10 Photos Of William, Harry, & Their Cousins Honoring The Queen Together
By Stephanie Topacio Long
William & Kate Shared How Their Kids Are Doing As They Mourn The Queen
By Stephanie Topacio Long
DJ Tyler West Is Probably Safe From The “Strictly Curse”
By Maxine Harrison
Get The Very Best Of Bustle/UK