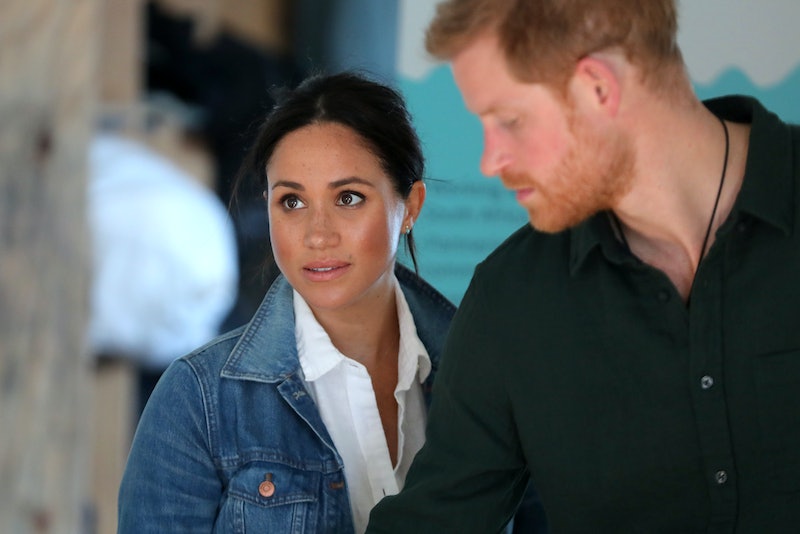 Meghan Markle and Prince Harry have mostly stayed out of the spotlight since they stepped back from official royal life and made the move to LA. But true to form, the pair have maintained their charitable efforts, and have been supporting their favourite UK organisations from afar, albeit a little more under the radar. This week, one such effort was brought to public attention: Meghan Markle's Zoom call with the Hubb Community Kitchen, to help support the women's amazing work during the coronavirus pandemic.

Speaking from LA, Markle chatted to Leila Hedjem, Cherine Mallah, Halima Al-Hudafi, Oxana Sinitsyna and Jennifer Odonkor, all of whom work at the Hubb Community Kitchen, which was created following the Grenfell Tower tragedy. The Hubb Community Kitchen has recently launched a campaign which — with the help of another charity, The Felix Project — is helping to feed Londoners during the COVID-19 lockdown.

The campaign will see these inspirational women aim to deliver between 250 and 300 meals to London families, for three days a week, alongside Street Games (a charity the royal couple also actively support). The service is part of the Evening Standard's new coronavirus campaign: Food For London Now.

While the full conversation will likely be kept private, a short clip has been released, in which Markle congratulates the women on their new project: "You all had it in you, and what was so great is after that first day, and then however many visits later, going 'yeah we’re just going to make a book', and not realising – knowing and having a lot of faith in what you guys could bring to the table, and what you could inspire – but, obviously not knowing what a huge success it was going to be.

"That is just a testament to you, and what I love is it's just inspired so many people," Markle added.

Speaking about the women's work during the coronavirus pandemic, Markle said in a statement: "I'm so proud of the women of the Hubb Community Kitchen, and the continued support The Felix Project gives them to carry out these acts of goodwill, which at this moment in time are urgently needed. I’m equally moved by the many people who are contributing to the Evening Standard's campaign to raise money for these vital organisations in the wake of COVID-19."

The Duchess has been a key part of the Hubb Community Kitchen's work in the past couple of years, having first visited the women who work there in 2018, and later writing the foreword for their book.

You can donate to the Evening Standard's Food For London Now Campaign at: virginmoneygiving.com/fund/FoodforLondonNOW