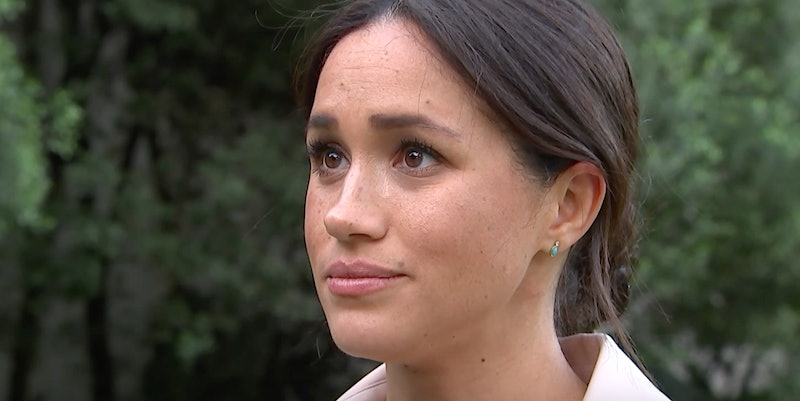 From the outside, The Duchess Of Sussex, Meghan Markle has the dream life. She's intelligent, passionate, accomplished, beautiful, and oh, she's married to a Prince. But Meghan has had anything but an easy ride when it comes to media attention since her engagement to Prince Harry, Duke of Sussex, and it has understandably taken its toll. In a new documentary, due to air this Sunday, Meghan opens up about the media pressure she's faced in the past couple of years, revealing just how difficult it has been for her, particularly as a pregnant woman.

In a clip shared on ITV's Twitter page, interviewer Tom Bradby asks Meghan about the pressures of dealing with the press, and how she has really coped with it all. Speaking with poise, but in a completely genuine way, Meghan is visibly troubled when having to discuss how it has all affected her:

"Any woman, especially when they're pregnant, you're really vulnerable, so that was made really challenging," she begun. "And then you have a new born... and especially as a woman, it's a lot."

She also graciously thanked the interviewer for even checking in with her, as she explained that "not many people have asked if I'm OK, but it's a very real thing to be going through behind the scenes."

When Bradby went on to ask if it's fair to say, then, that she was perhaps not OK, and had been finding it a struggle, she simply responded: "Yes."

Meghan's comments come shortly after the news that the royal couple are filing a lawsuit against a major British newspapers after it published a letter that she had sent to her father.

Her comments to Bradby are part of a documentary that is set to air on Sunday, Oct. 20, at 9 p.m. on ITV, named Harry & Meghan: An African Journey. As its name suggests, the show follows the couple on their recent royal tour to Africa.