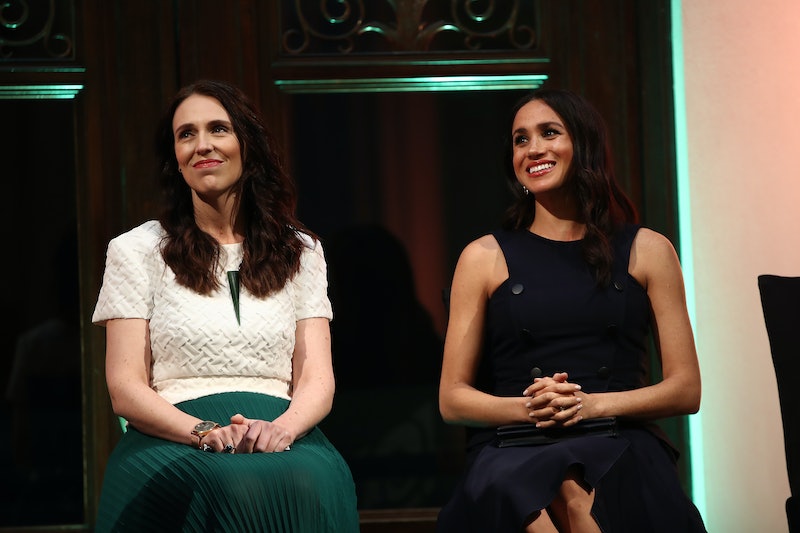 Am I the only one who misses waking up to new snaps of the Duke and Duchess of Sussex on their first royal tour? I thought not. However, although Meghan and Harry are now back in the UK, it seems their trip abroad may have sparked an exciting new friendship. As reported by the Express this morning, Meghan Markle met New Zealand's Prime Minister Jacinda Ardern in a private meeting on Monday. Boy, what I would have given to see the New Zealand Prime Minister and the Duchess together again — their outings were the total highlight of the Commonwealth tour for me, that's for sure.

According to the Express, Kensington Palace has confirmed that a meeting between the two took place on Jan. 21 while Ardern is in the country to meet with Theresa May for lunch at Downing Street. Royal commentator Omid Scobie tweeted that a source told him Markle was "pleased to have the chance to thank the PM for the wonderful hospitality [she and Harry] received from the people of New Zealand last year." Scobie also wrote that he:

"Enjoyed chatting with Jacinda on the tour. She came away from her time with Harry and Meghan impressed, telling me: 'The Duke and Duchess are both very warm people... They really care about the work they do, they take their service seriously and I have a lot of respect for that.'"

The impromptu meeting between Markle and Ardern was a chance for the two to "recognise their recent successful visit to [New Zealand]," according to a tweet from TVNZ's Europe correspondent, Joy Reid.

Ardern's sole reason for visiting the UK was not to visit Markle, however. With the prospect of Brexit still looming over the UK and the Commonwealth countries, Ardern met with May to discuss a future post-Brexit trade deal between the two countries, the BBC reported. "Obviously, as an important trading partner for us, at the point that the UK is ready to do so we're very keen to enter a free trade agreement," Ardern told the BBC on Monday.

Markle and Arden certainly hit it off during the Duke and Duchess's royal visit last year, especially during the celebration of the 125th anniversary of women's suffrage in New Zealand, Town & Country reports. It was during this event that Markle spoke of the ripple effect that New Zealand's women created when campaigned for their right to vote. "The achievements of the women of New Zealand who campaigned for their right to vote, and were the first in the world to achieve it, are universally admired," Markle sad. The duchess also took the time to mention Ardern specifically, and to thank her for the "warm welcome to government house," and "for hosting [her] and Harry during [their] special time in New Zealand."

And as the Irish Independent reported, Ardern also spoke fondly of her time with the Duchess, and commented that she felt "real empathy" for Markle, who is carrying our her royal duties while pregnant. "It's just increased my respect for the role that she's playing at such an often tiring time," said Arden, who herself gave birth last year while in office. "I think she's incredible," the Prime Minister said. Same, Ardern, same.