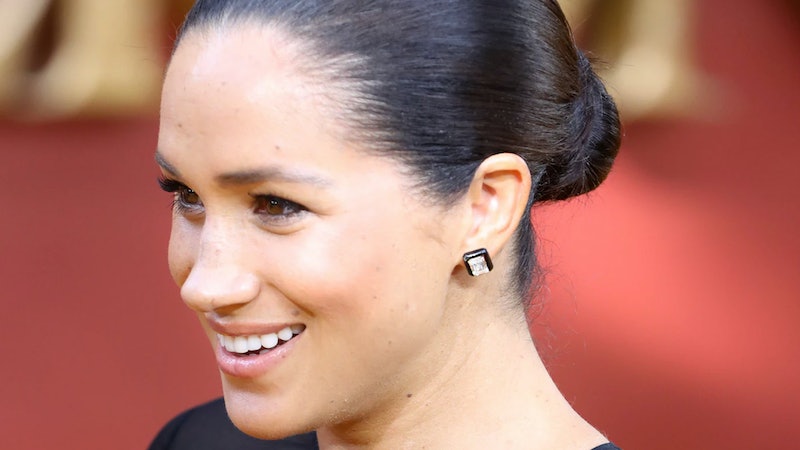 For their first film premiere as a couple, Prince Harry and Meghan Markle did a pretty great job at stealing the hearts of The Lion King cast, and the public in general. And while the internet may still be reeling from Meghan finally meeting Beyoncé and Jay Z, Pharrell Williams also stole the show with this hilariously stylish tux jacket and shorts ensemble. He also seemed to make the Duke and Duchess of Sussex feel at ease, especially hearing Meghan Markle’s comments to Pharrell Williams. While short, it gave some insight into how the couple handles the public’s perception of them.

Captured on their Instagram account, as PopSugar reports, Williams jokingly curtsied after Harry complimented his choice of legwear. While you can’t watch the video anymore on their account, thankfully @royal_suitor on Twitter also captured the moment. Despite the low volume, you can also hear William’s conversation with the duke and duchess, which was also transcribed by the royal fan.

“So happy for your union. Love is amazing. It’s wonderful,” Williams can be heard saying to the couple. “Don’t ever take that for granted but what it means in today’s climate, I just wanted to tell you it’s so significant for so many of us. Seriously. We cheer you guys on.”

Clearly moved by his sentiments, Meghan thanked Williams, who went on to add, "So you understand the significance, it’s beautiful.” Meghan then replied, "They don’t make it easy." As lovely as is to hear Meghan receiving this support, it’s a shame to hear that she’s aware of the unfair coverage that she receives in certain quarters of the media.

But it is a relief to see how many people she has supporting her, as evidenced by Williams' comments and Beyoncé’s complete adoration of her when they first met at the premiere. Earlier this week, Serena Williams also spoke of her friendship with the duchess while at Wimbledon after being asked about Meghan's security guards allegedly asking "bystanders not to take pictures of the Duchess,” as Harper’s Bazaar reports.

“I didn’t know there was negative media out there. Any time I see her name attached to anything, I don’t read it,” Serena said. “She couldn’t be a better friend to me. Low moments, high moments, she’s always there, and that’s all I want to be to her.”

As Harper’s Bazaar also points out, Meghan has also made similar comments. While speaking at an International Women's Day conference in March, she spoke of how she ignores what is written about her online and in the press. "I don’t read anything, it’s much safer that way, but equally that’s just my own personal preference,” the duchess said. “[B]ecause I think positive or negative, it can all sort of just feel like noise to a certain extent these days.”

It's comforting to hear that Meghan is finding a way to navigate the onslaught of criticism that is unjustly thrown in her direction. Here's hoping she's getting every bit as much support as she deserves.

More like this
Olivia Colman Stars In First-Look Trailer For BBC's 'Great Expectations'
By Sabah Hussain and Sam Ramsden
Taylor Swift & Harry Styles Had A Secret Reunion At The Grammys
By Shahed Ezaydi
Claire Foy Spoke Out About 'The Crown's Gender Pay Gap
By Sam Ramsden
Armani Jackson Is Following In His Famous Actor Sister’s Footsteps
By Catharina Cheung
Get The Very Best Of Bustle/UK
Sign up for Bustle UK's twice-weekly newsletter, featuring the latest must-watch TV, moving personal stories, and expert advice on the hottest viral buys.