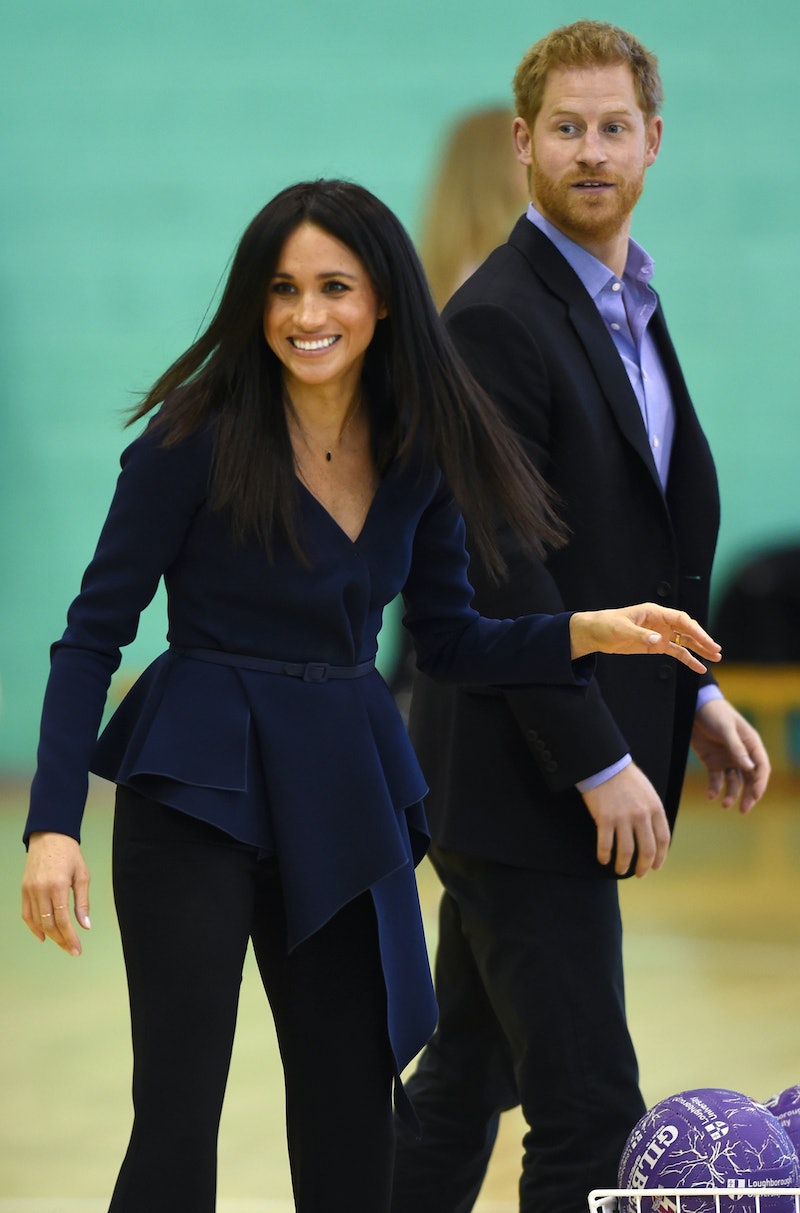 It's been an eventful month for the Duke and Duchess of Sussex. On Monday, Meghan Markle and Prince Harry participated in a game of netball to support Coach Core, an organization started by the Royal Foundation. According to the Royal Foundation's website, Coach Core helps young people establish a career if they don't already have access to education, employment, or training. The organization brings together professional sports clubs, sporting organizations, and local businesses to create opportunity in their communities.

Prince Harry and Markle attended the Coach Core Awards, and met with the 60 coaches who were graduating apprentices through the program. According to the Kensington Palace Twitter, the event took place at Loughborough University, and was meant to celebrate the success of the organization. According to the website, Coach Core has had a tangible positive impact. Since its founding in 2012, over 313 apprentices recruited since, and there's a 99 percent success rate in terms of securing employment or full time education for graduates.

While the event was primarily to honor those graduating, the Duke and Duchess of Sussex also took the opportunity to join in the fun. According to E! News, Markle and Prince Harry joined a game of netball with the graduates ahead of the award ceremony. Markle was reportedly wearing an Oscar de la Renta top, black Altuzarra pants, and heels, while Harry was in a neat suit. Their attire didn't stop the couple from participating in the game, and Markle even joined in with her heels on — because there's nothing she can't do.

In a video posted on Twitter by royal commentator Omid Scobie, the Duke and Duchess of Sussex can be seen facing off in the netball challenge, passing the ball and laughing.

The netball demonstration was certainly one of the most eventful parts of the day, but on Twitter, Kensington Palace also shared plenty of highlights from the award ceremony. One Tweet included a quote from Markle praising her husband for the impact his work with Coach Core has had throughout England. She said,

"My husband has devoted so many years to Coach Core and in the past year of my being in the U.K. to be able to see not just the impact but the incredible inspiration and sense of purpose that this instills in people is astounding."

In addition to handing out awards and meeting with graduates, Prince Harry also offered some words about the organization's purpose. According to Kensington Palace, he told the audience, "Sport can inspire and invigorate, and as we have seen today, with the right opportunity, the right mentoring and the right focus, lives can be changed."

It's no secret that the royal family believes in empowerment through athletics. In September, Markle and Prince Harry will attend the 2018 Invictus Games in Sydney, Australia. The Paralympic style, biannual event was created by Prince Harry to help veterans rehabilitate physically and psychologically through sport. The event began after Prince Harry, who is a veteran himself, attended the Warrior Games in the United States, according to the Invictus Games website.

The Duke and Duchess of Sussex are known for their philanthropic work, but it's been an especially eventful month for the couple. In addition to showing support for Coach Core, Markle launched a cookbook titled Together: Our Community Cookbook to support the Hubb Community Kitchen. The project is meant to help bring the community together through food in the aftermath of the tragic fires at Grenfell Tower in 2017.

In the future, Prince Harry and Markle are likely to continue to spearhead charitable initiatives like Coach Core. Even though they take their work with the Royal Foundation seriously, it's nice to see them have a chance to relax and participate in a friendly game of netball.