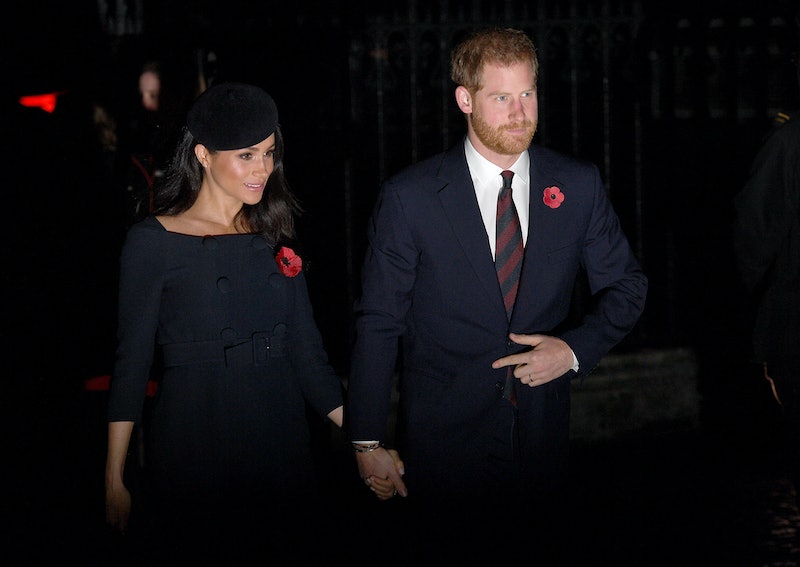 On Saturday, the Commonwealth of Nations commemorated the end of World War I with Remembrance Day. The day's celebration includes the royal family, as Meghan Markle and Prince Harry honored Remembrance Day with Kate Middleton and Prince William. According to ET Online, the four royals attended a solemn event that included a laying of a wreath at the Cenotaph memorial in London. After the proceedings, the two couples also appeared at the Royal British Legion Festival of Remembrance at Albert Hall. The event paid tribute to those who lost their lives in World War I, and marks the 100th year since the war ended. According to People, the two royal couples wore red poppies throughout the day as a symbol of remembrance for the veterans.

The responsibilities of the Remembrance Day ceremony have been passed down from Queen Elizabeth and Prince Philip. Prince Charles laid the wreath for the Queen, and a stand-in put one down for Prince Philip, who retired from public life in 2017 at the age of 96. Prince William and Prince Harry appeared side-by-side in military uniform, and each of the brothers put a wreath of their own on the memorial.

During the moment, Middleton stood on a balcony with Queen Elizabeth and Camilla, the Duchess of Cornwall. In October, Middleton revealed her grandmother had three brothers who were killed during WWI, adding even more weight to the service for the Duchess. Meanwhile, Markle watched from another balcony, alongside the president of Germany's wife, Elke Büdenbender.

The Duke and Duchess of Sussex reunited with the Duke and Duchess of Cambridge in the evening for the Festival of Remembrance. Throughout the day, Markle and Middleton donned similar black coats, hats, and dresses out of respect for the fallen soldiers. As reported by E!, it was the four royals first joint appearance since July, when they came together for the 100th Anniversary of the Royal Air Force celebration and Prince Louis' christening. The appearance comes amid reports that the two royal couples may part professional ways. In November, The Sunday Times reported that Prince William and Prince Harry will likely divide the royal household and establish their own courts with separate staffs in Kensington Palace.

Prince Harry and Prince William's split would have major implications for the royal family's future. The division would reportedly take place after Markle gives birth in the spring, and represents the two brothers' changing roles in the monarchy. Prince William is a formal heir to the throne, and will need to prepare to take on those responsibilities. His own son, Prince George, will also be expected to one day ascend to the position. In contrast, Prince Harry and Markle will have more flexibility in terms of their future, and they'll likely want to turn their full attention toward charitable pursuits.

Splitting the royal court would separate Prince Harry and Prince William's duties, but would be more of a formality than a dramatic break-up. According to People, the four will continue the success of the Royal Foundation. Royals Author Sally Bedell Smith explained the couples' change in priorities for the magazine. "I think it really is just a shift in priorities and interests," she said. "Each of them will continue the very strong representative of the Queen in carrying out tasks and assignments that she, and probably their father, wants them to do. They are going to be sharing in this diffusion of activities on behalf of the Queen.”

According to ET, an anonymous source confirmed that Meghan and Harry are planning a quiet upbringing for their kids, as they are not expected to succeed the throne. "Meghan and Harry, who want to use their platform and profile to further their humanitarian and charitable interests, want to pass on those same values to their children,"the source told the publication. "They plan to spend a considerable amount of time in their Cotswold home."

It's clear that while professional and personal responsibilities will diverge paths for Prince Harry and Markle from Prince William and Middleton, it would not endanger their relationship. The two royal couples are still likely to appear alongside each other at events, and it makes sense for them to come together to honor veterans. The royal brothers both served in the military, which makes their family's reunion on Remembrance Day even more meaningful.