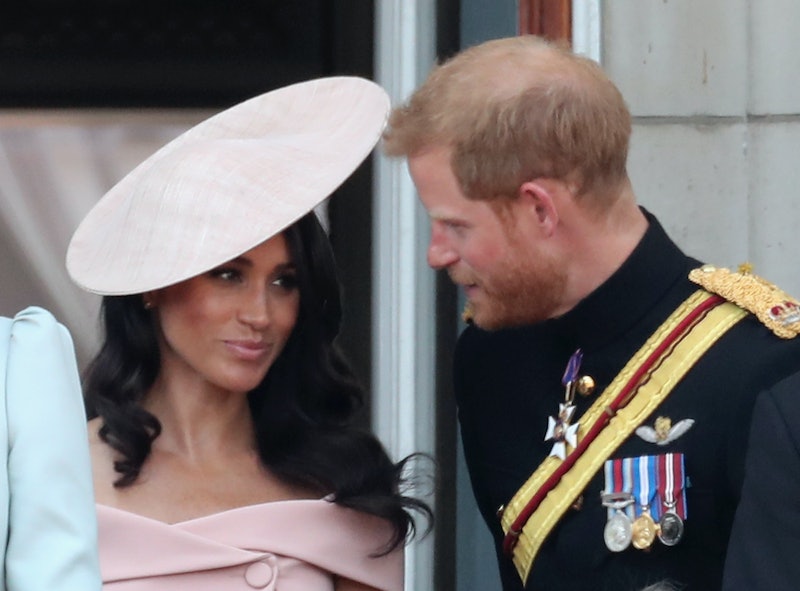 The Duke and Duchess of Sussex are serious world travelers, guys. And they'll be heading to another fun location incredibly soon. As People noted, Meghan Markle and Prince Harry are going to Dublin, Ireland. It will be the next major tour stop for the newlyweds.

Kensington Palace released a statement on June 18 about the couple's upcoming tour. They related that the engagement will take place on July 10 and 11 (aka in less than a month), and that it is "at the request of Her Majesty's government" that they're taking to Dublin.

In another tweet from the palace, it was announced that the royal pair "are looking forward to learning more about Ireland's history and experiencing its rich culture." The Palace continued to say that Harry and Markle are planning on meeting "the people who are shaping the country's future." What else may be in store for them during the trip? Well, according to People, they could take to the Guinness Storehouse during their visit for a pint of the classic drink. Official details will likely be released when the date of their trip gets even closer.

Unless they add any other official engagements in the meantime (which could very well happen), Harry and Markle's trip to Dublin might be the next time that you see the pair. On the royal family's official website, which details the royals' future engagements, there aren't any listed for the Duke or Duchess of Sussex. So, mark those July dates down in your calendars, royal watchers, because the couple's next tour is coming up so soon.

Harry and Markle's trip to Dublin was rumored to be happening even before Kensington Palace confirmed it. The Belfast Telegraph reported on June 11 that they were set to visit Ireland sometime in July. Interestingly enough, the publication noted that this will be the first time that Harry will visit the country in an official capacity.

As for Markle, she's been to the Emerald Isle before, not as a royal, though. In 2014, the former Suits star attended the One Young World summit, which took place in Dublin that year. According to the website for the summit, she served as a counsellor for the organization and spoke at the event, where she introduced a young activist from Eritrea. Seeing as though Markle's been to the country before, and recently, it may be that she'll have to show Harry the ropes when they head out on their tour.

This isn't the only tour that the Duke and Duchess of Sussex will go on, though. The palace previously announced, on June 10, another major excursion for the husband and wife duo. They said that Harry and Markle will head to Australia, Fiji, New Zealand, and the Kingdom of Tonga in the autumn. Their visit will coincide with the 2018 Invictus Games, which will take place from Oct. 20-27 in Sydney, Australia, according to its official website.

It was already a given that Harry was going to head to the land down under for the event, with his new wife in tow, because of his direct connection to it. The Prince actually launched the Games, which involves wounded servicemen and servicewomen competing in Olympic-style events, in 2014, after his many years of service in the military.

Additionally, Markle may have already let it slip that they were heading to Australia, as Town & Country noted. She told an Incitus Games hopeful, when she visited the team trials in Bath with Harry, that she was "really looking forward" to going to the country with her husband, per royal reporter Omid Scobie.

It sounds like the Duke and Duchess will have a lot on their plates in the upcoming months. However, that just means that royal watchers will just get to see even more of the charismatic newlyweds.