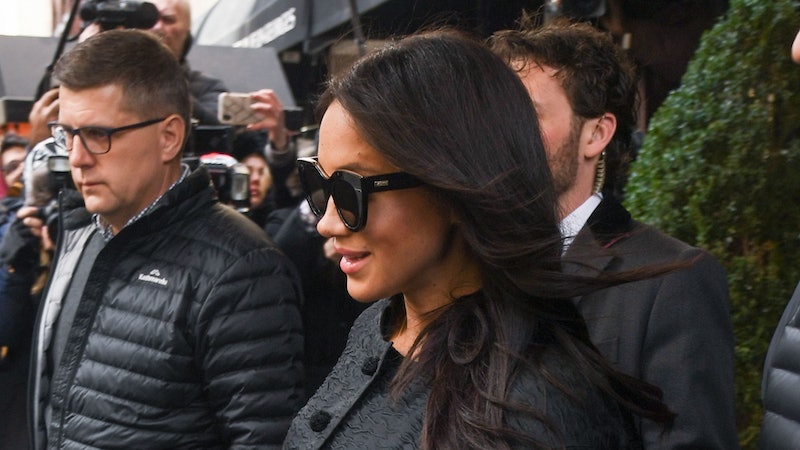 The "Markle Sparkle" or the "Meghan Markle Effect" is a real thing, with fans of the royal clambering to buy the outfits she wears the moment photos post. Well, Meghan Markle's Le Specs sunglasses that she wore to her baby shower this week in New York City are no exception. And bonus: The stylish shades were a budget-friendly $70.

The Duchess of Sussex was spotted leaving London en route to Manhattan earlier last week, headed on a trip that had nothing to do with work. Markle carved out some time from her royal engagements to meet with her friends on the other side of the pond for a weekend of relaxing, catching up, and celebrating her impending motherhood. Markle was spotted leaving The Mark Hotel in a chauffeured car that would take her to the Upper East Side, where her baby shower was being thrown by 15 of her closest friends. She stepped out onto the pavement wearing her trademark Markle look, dressed all in black and accessorizing with subtle nude accessories. While her whole wardrobe was chic, Markle's sunglasses in particular made waves. Many were glad to hear that the Le Specs shades only clocked in at $70 — especially considering the Duchess's designer wardrobe often boasts pieces that range in the thousand dollar price point.

Marie Claire did some sleuthing and confirmed with the brand that they were indeed the Air Heart Cat-Eye Acetate and Gold-Tone Sunglasses, which are oversized, thick-framed lenses. The frames are big, but without feeling too early-noughties with their size, don't worry. The frames also feature a small, gold Le Specs word tag by the ears. Markle's particular shades came with dark khaki lenses, which broke up the "all black" look.

The brand also took to Instagram once it saw the British royal wear its frames, and confirming to followers everywhere that it was the Air Heart lenses that were shielding the Duchess's eyes on the nippy winter day. This confirmation helped many people online, since many were wondering if the glasses could possibly be the Matriarch or Airy Canary pair, according to comments under the Instagram post.

A quick spin on Le Spec's 'gram lets you see the Air Heart lenses in different angles and on different face shapes, like below.

It's easy to see why followers were confused which particular frame the Duchess was wearing, since both Matriarch and Airy Canary have similar vibes.

However, Matriarch has a more rounded frame, and is "unapologetically oversized," according to the product page.

Airy Canary has a slightly more geometric fit, where its frame seems more elongated and nipped in.

On the flip side, if you like Markle's Air Heart pair but prefer a little more color, there is a Torte Smoke pair that is the tortoiseshell sister to the black version.

As for the rest of Markle's outfit, the expecting royal wore a William Vintage Courrèges Haute Couture coat, a pair of Hatch black skinny jeans, and a nude colored tote that perfectly matched her beige Stuart Weitzman suede heels. While the haute couture coat might be out of one's price range, there's always room for some affordable sunnies to make you feel like a Duchess.