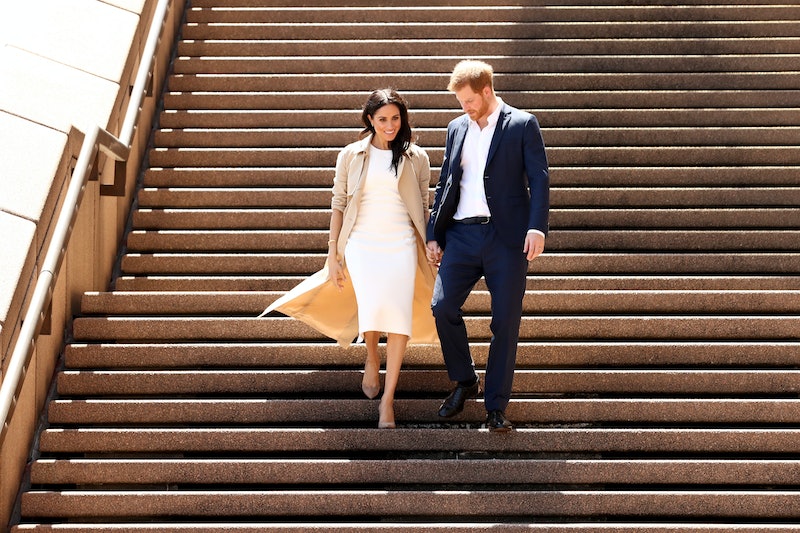 Four months after their internationally broadcasted wedding, Prince Harry and his wife revealed they'd be having a baby, enthralling their fans all over again. Meghan Markle's first appearance since her pregnancy announcement on Monday revealed a little baby bump, which was enough to send the world into royal baby-mania. The royal parents are expecting their baby to arrive sometime in the spring of 2019, according to the official announcement.

The news came when Kensington Palace tweeted on Monday, "Their Royal Highnesses The Duke and Duchess of Sussex are very pleased to announce that The Duchess of Sussex is expecting a baby in the Spring of 2019."

Shortly after, Kensington followed up with a subsequent tweet: "Their Royal Highnesses have appreciated all of the support they have received from people around the world since their wedding in May and are delighted to be able to share this happy news with the public."

Markle and Prince Harry did take the time to step out later in the day as a part of their royal tour in Australia. More specifically, the big reveal occurred during their visit to Admiralty House in Kirribilli, Australia. The pair visited the Sydney's Taronga Zoo and got up close to adorable koalas and their babies, among a handful of other animals. They also received their first official baby gift that day. While meeting Governor-General Sir Peter Cosgrove and Lady Lynne Cosgrove at Admiralty House, they were given a little stuffed kangaroo that had a baby joey in its pouch, along with baby Ugg boots.

Though Markle's bump is barely visible, People confirmed via a royal source that Markle is approximately 12 weeks along, and is feeling "well."

People also confirmed that Prince Harry and Markle were able to celebrate with their family and friends in person when they attended Princess Eugenie's wedding last week. Markle wore a coat throughout the wedding, and naturally Twitter users went wild with speculation — which, to be fair, turned out to be accurate.

The couple's pregnancy will mark the fourth child born between the two princes, Harry and William. This will be Prince Harry's first child. Prince William already has three children with his wife, the Duchess of Cambridge, Kate Middleton. Middleton will likely be able to give Markle advice on the experience of serving royal duties while pregnant, though it seems like Markle is already having an easier go of it than Middleton did: Middleton reportedly dealt with severe morning sickness during all three of her pregnancies.

Specifically, CBS News reports that Middleton suffered from hyperemesis gravidarum, an especially brutal type of morning sickness that affects anywhere from one to three percent of pregnant women. It can lead to vomiting and nausea so severe that hospitalization is often necessary, and was for Middleton.

For now, Markle has been all smiles in public. She also was making a subtle nod to history during her first post-pregnancy announcement outing, which might have been spotted by diehard fans of the royal family: she wore Princess Diana's gold and diamond butterfly earrings, as well as a gold bracelet that used to belong to Princess Diana, as well.