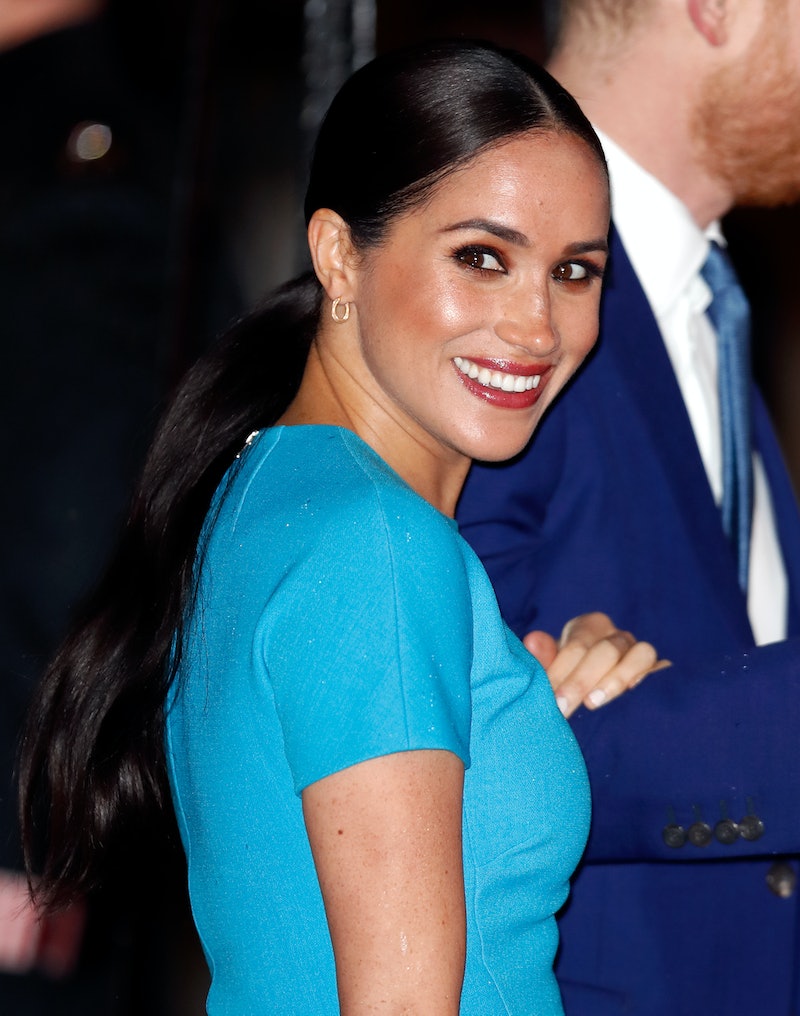 The Duchess of Sussex is returning back to her television roots — but no, it's not a Suits reboot. Meghan Markle is narrating the Disneynature documentary Elephant, as confirmed by Disney on Thursday, March 26, and it's being released in April. So basically, you'll be able to listen to Meghan, Duchess of Sussex talk about elephants while you're stuck at home. Is there anything better?

According to PEOPLE, Meghan agreed to narrate the new documentary months before her and husband Prince Harry, Duke of Sussex, announced their decision to step down as senior working members of the Royal Family. She had seen some footage from the doc prior to agreeing, and recorded her voiceover last fall in London. Therefore, this reportedly doesn't actually mark her first step in working toward financial independence. Still, it is her first post-royal project.

Disneynature released a teaser trailer of Elephant on Thursday, describing it as a "powerful story that shows just how far family can take you, as epic and inspiring as nature itself." The film follows African elephant Shani and her son Jomo as they embark on a journey through the Kalahari Desert, encountering enormous struggles in an effort to reach their new home.

Meghan likely agreed to participate in Disney's film due to her previous advocacy for the majestic creatures. In 2017, she traveled to Botswana with Harry to assist Dr. Mike Chase of Elephants Without Borders and help him with conservation efforts. In fact, according to People, it was mutual friends of Dr. Chase and herself who made Meghan aware of the documentary.

Despite speculation, there is no deal in place for Markle to participate in other Disney projects at this time. However, this possibility is apparently not out of the question. When the couple attended the London premiere of The Lion King in July 2019, Harry was heard in a video telling then Disney CEO Bob Iger that Markle was interested in doing voiceover work. Perhaps Elephant will be the beginning of a long-term partnership.

Elephant will premiere on Disney+ on April 3 alongside another Disneynature documentary, Dolphin Reef, narrated by Natalie Portman. They'll make social distancing a breeze, at least for a few hours.

More like this
Stephen Graham & Steve McQueen Are Working On A Wartime Drama
By Darshita Goyal
Yes, You Can Stream ‘To Leslie’ In The UK Now
By Sam Ramsden
Channing Tatum “Nearly Killed” Salma Hayek During 'Magic Mike' Lap Dance
By Sam Ramsden
Jemima Khan Used Her Own Life As Inspo For 'What’s Love Got To Do With It?'
By Darshita Goyal
Get Even More From Bustle — Sign Up For The Newsletter
From hair trends to relationship advice, our daily newsletter has everything you need to sound like a person who’s on TikTok, even if you aren’t.