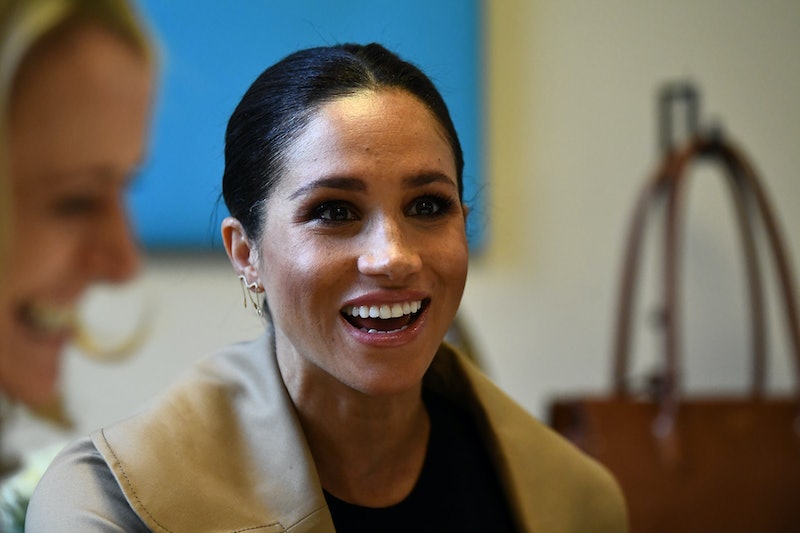 The great thing about the start of a new year is the opportunity to broaden your horizon. Whether you've set yourself a certain goal or you want to help out more in your local community, it's a chance to bring more positivity into your day to day life. The royal family are no different, often revealing which charities and organisations they will be supporting at the beginning of the year. Meghan Markle's official royal patronages have given us our first indication of how she will use her influence in her new role, and it involves a nod to her previous career.

"Her Royal Highness The Duchess of Sussex will become Patron of four organisations that reflect the causes and issues with which she has long been associated including the arts, access to education, support for women and animal welfare," a statement from Kensington Palace read. Interestingly, the statement noted that the Duchess is supporting various "national and grassroots organisations," which could be seen as a continuation of her enjoyment in working in smaller scale projects like the Hubb Community Kitchen.

Arguably the most prominent of these patronages is that of the National Theatre, which Markle takes over from the Queen, who has held the role for the past 45 years. According to the statement by the theatre, Markle feels as though "she can use her position to focus attention on and make a particular difference to the sector," which comes as no surprise seeing as she's had over a decade's worth of acting experience.

The National Theatre also notes how the Duchess's "belief in using the arts to bring people from different background and communities together" fits well with the patronage, and are hopeful she can help them create significant change, especially amongst the younger generation. It wouldn't be surprising to see Markle become an important figure in the National Theatre's programs that cater to young people, such as Connections, New Views, and Let's Play.

"It is a privilege to welcome The Duchess of Sussex as our new patron," Director of the National Theatre Rufus Norris said. "The Duchess shares our deeply-held conviction that theatre has the power to bring together people from all communities and walks of life. I very much look forward to closely with Her Royal Highness in the years to come."

The Duchess will also take over the patronage of the Association of Commonwealth Universities, which the Queen has presided over for 33 years. She will also be patron to two more charities, Smart Works and Mayhew. The former, Kensington Palace writes, "helps long term unemployed and vulnerable women regain the skills, confidence and tools to succeed at job interviews, return to employment and transform their lives." Mayhew, meanwhile, "uses innovative ways to reduce the number of animals in need through proactive community, and educational initiatives and preventative veterinary care."

As patron, Markle will be lending her name to these important organisations, working with them to provide vital awareness and wider attention to their causes. I can't wait to see what she achieves through her work with them in 2019 and beyond.

More like this
Will Archie & Lilibet Attend The Queen's Funeral?
By Sam Ramsden
Twitter Is Saying The Same Thing About Roger Federer’s Retirement From Tennis
By El Hunt
The Queen’s Cause Of Death May Not Be Formally Announced
By Shahed Ezaydi and Catharina Cheung
Princess Charlotte Proved She's Wise Beyond Her Years At The Queen's Funeral
By El Hunt
Get The Very Best Of Bustle/UK