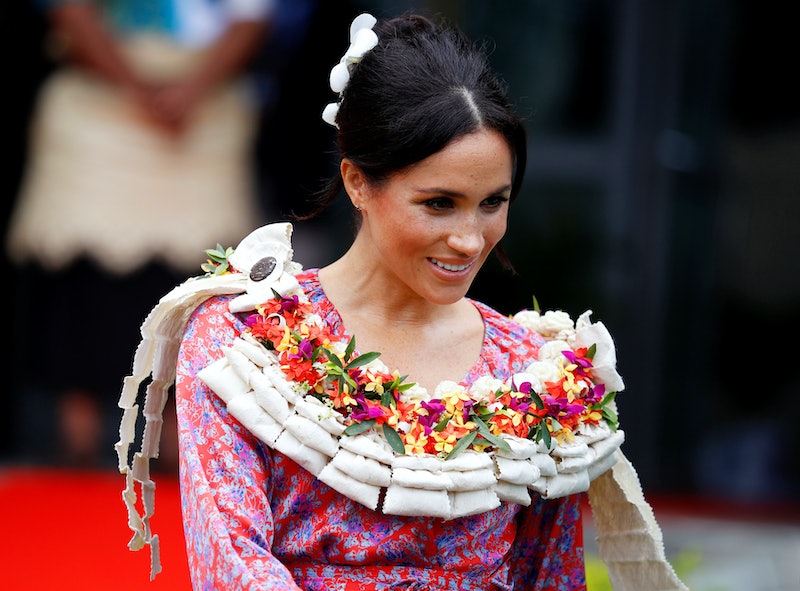 During the whirlwind that has been her first royal tour, Meghan Markle gave a speech about college that pretty much anyone could relate to. She spoke at the University of the South Pacific in Suva, Fiji, on Wednesday, wearing traditional garlands on top of a pink dress. And in her comments about college, Markle got real about what it took for her to be a college student, herself, as well as what it meant for her as a woman to gain a college degree.

Prior to becoming an actress, Markle attended Northwestern University, graduating in 2003 with a double major in theater and international studies. On Wednesday, Markle said of the experience, “It was through scholarships, financial aid programs and work-study where my earnings from a job on campus went directly towards my tuition – that I was able to attend university. And, without question, it was worth every effort."

Markle added, "When girls are given the right tools to succeed, they can create incredible futures, not only for themselves but for all of those around them."

Markle noted the importance of continuing to widen the scope of opportunities for women. Then she announced the establishment of two new grants for female staffers at the university.

Markle concluded the speech by saying, “My husband Harry and I wish you all the very best of luck as you continue your studies and your work. Your efforts now will help to make a positive future for each of you and your communities at large.”

As an American-born duchess, Markle has been the topic of conversation since her relationship with Prince Harry was first revealed to her public. But her earlier years in particular have been a point of interest.

One of Markle's Northwestern professors, Theater Department Chair Harvey Young, remembered Markle as an engaged student in a theatre and history criticism class he taught in 2003. To Northwestern Now, he said,

Being a biracial actress, Meghan had a sophisticated view and understanding of what it means to be perceived and treated differently. She was quite aware of how people respond to race and was very clear about the need to think about the experiences of people who are not only biracial but also people of color.

He added that Markle had a keen sense of passion in the realm of women's rights in particular. He said, "Meghan was passionate about theater and had a self-confidence you could see helping her weather the storms of the professional world.”

The last time Markle visited Northwestern was in 2014, to promote her show, Suits. During her visit, she spoke to North by Northwestern about returning to her alma mater. She said, "It’s surreal being back because I haven’t been back since I graduated and as I am walking around I remember things like the schlep of getting to South Campus from up north." She added, "The 24-hour Burger King also definitely helped me put on the Freshman Fifteen.”

Markle's speech at the University of the South Pacific is her second so far as the Duchess of Sussex; in September, she gave her first public speech to celebrate the release of a cookbook she collaborated on.