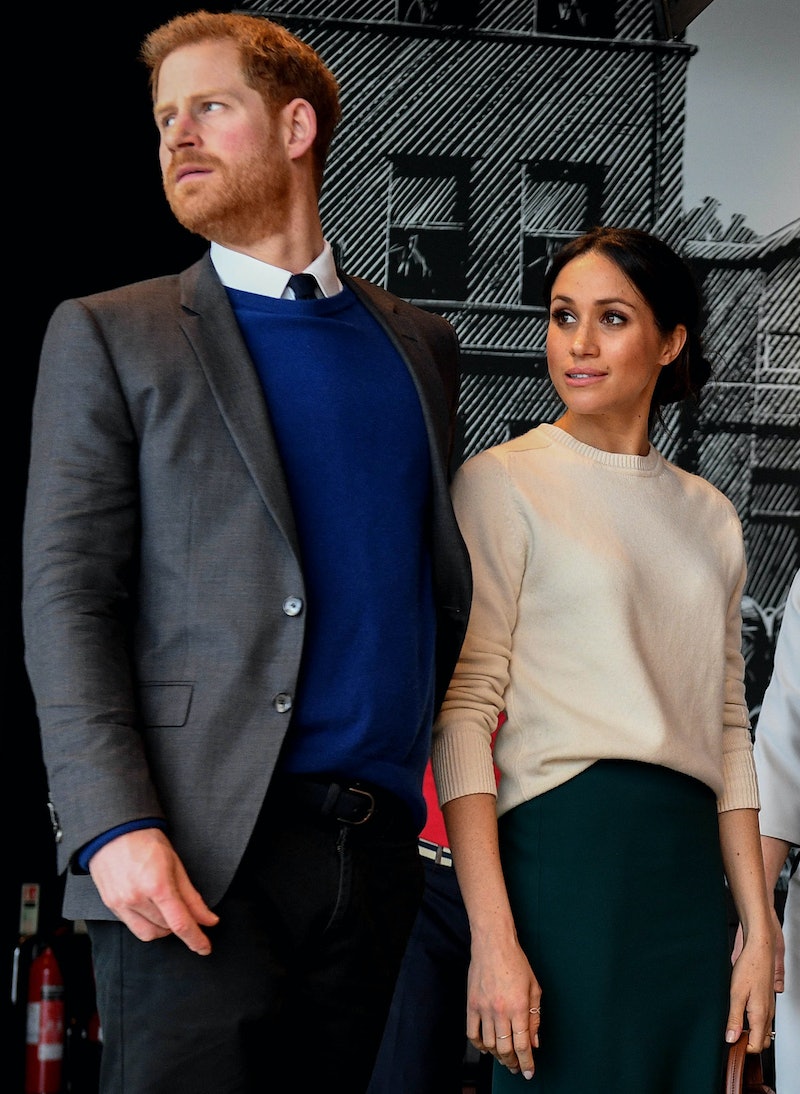 At long last, Meghan Markle's and Prince Harry's wedding invitations have gone out, hence why I've been patiently standing by my mail slot for the last two days, interrogating every postal worker who walks within 20 feet of it. But while the Barnard Westwood-designed invitations are, of course, spectacular, complete with elegant calligraphy and embossed with a gold Three-Feathered Badge of the Prince of Wales, they seem to harbor a teeny mistake: Meghan Markle's full name, Rachel Meghan Markle, is not being used on the invite. Of course, this isn't nearly as devastating an error as Meghan Markle and Prince Harry forgetting to invite me, but I imagine at least someone will be upset.

Indeed, as reported by Marie Claire, though Meghan Markle tends to go by her middle name, her full name is Rachel Meghan Markle. And when Queen Elizabeth II gave Meghan Markle and Prince Harry her official consent to marry (being a royal kinda stinks, if you think about it), she used Markle's full name. "I declare My Consent to a Contract of Matrimony between My Most Dearly Beloved Grandson Prince Henry Charles Albert David of Wales and Rachel Meghan Markle," she wrote, according to Reuters.

But on the invitation, Markle's name is truncated. "His Royal Highness The Prince of Wales, K.G., K.T. requests the pleasure of the company of [insert my name here] at the Marriage of His Royal Highness Prince Henry of Wales with Ms Meghan Markle," the invitation reads. Apparently, this non-official name situation is new; even though Kate Middleton is solidly cemented as "Kate" by the royal family, her wedding invitation read "Miss Catherine Middleton" and not "Miss Kate Middleton." Quel scandale!

It's unclear whether the "Rachel" omission was an error, or simply Meghan Markle's choice of name — there's a difference between a nickname (Kate to Middleton's Catherine) and your chosen name, and considering not many people know Meghan Markle as Rachel, it makes sense that Buckingham Palace would pick the most recognizable moniker. "Buckingham Palace does things by the book, so they will list your full name," Grant Harrold, an expert on British etiquette, told Good Housekeeping. "Even though it’s an official occasion, they’ve obviously decided that she’s known to as everybody as Meghan Markle and issued the invitations under that name."

It's also noteworthy that Prince Harry's name looks a little screwy on the invitations to our American eyes. In fact, according to People magazine, Harry's real name is Henry (or, if we're being super formal, Henry Charles Albert David, as if they couldn't squeeze enough Anglo-Saxon boy names in there), hence why there's a change-up on the invite. William's full name, if you're curious, is William Arthur Philip Louis, and technically both Harry and William carry the surnames Windsor and Mountbatten, which was Prince Phillip's family name (and a big sticking point in the first season of The Crown, which is where I have derived all of my royal family knowledge). So, when Meghan Markle marries Harry, she'll get the name Rachel Meghan Markle Mountbatten-Windsor. Not a great stage name, but it sounds like it'll be fun to announce at balls.

In other news, it's not yet been revealed which celebrities scored official invites to the upcoming royal wedding (PLEASE INVITE ME), though Entertainment Tonight suspects there'll be a slew of big names. Potential celeb guests include the Spice Girls (!!!!), Elton John, Serena Williams (she and Meghan Markle are buds), Priyanka Chopra (also buds), the cast of Suits (duh), and the Obamas, who'd probably cause some kind of diplomatic crisis if they were invited over the Trumps, but it's totally worth it, IMO.