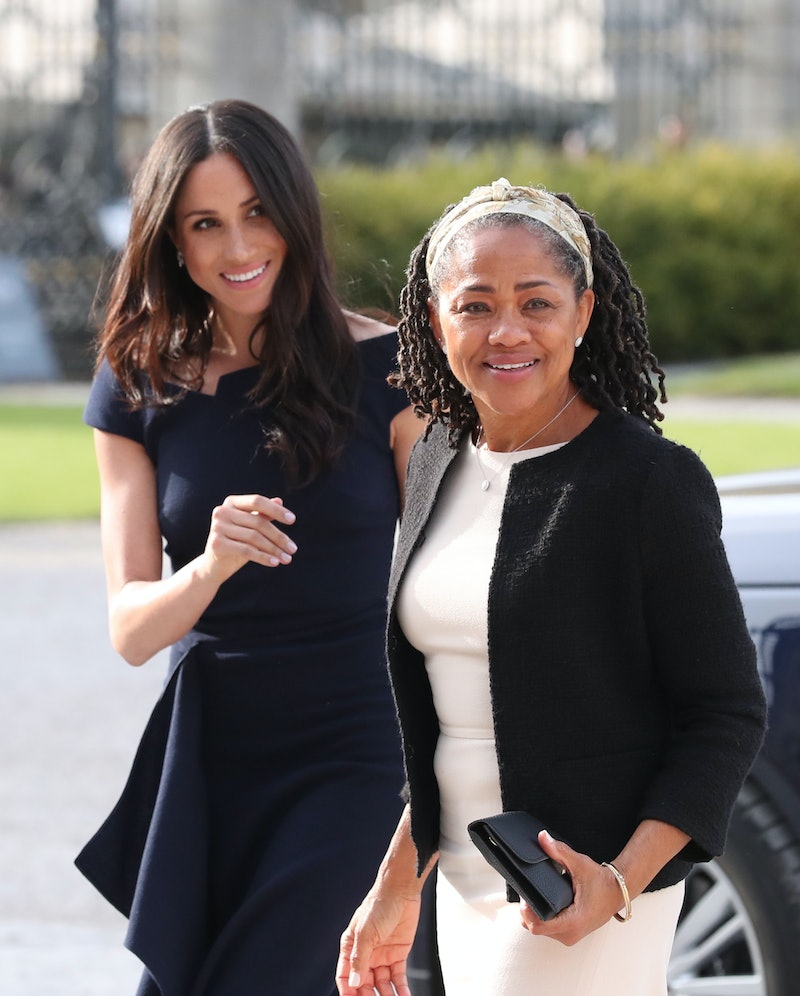 There's a royal baby on the way for the Duke and Duchess of Sussex. On Monday, Kensington Palace announced the big news. And according to E! News, Meghan Markle's mom's reaction to her pregnancy captures how thrilled she is to become a grandmother. Markle's mother Doria Ragland was reportedly told of the news prior to the announcement, and a Kensington Palace spokesman shared Ragland's reaction with media.

According to a tweet from royal commentator Omid Scobie, Ragland "is very happy about this lovely news and looking forward to welcoming her first grandchild." (This is similar to the quote E! News shared as well.) Markle is Ragland's only child, so the news of her pregnancy is particularly exciting for the soon-to-be grandparent.

The Duke and Duchess of Sussex shared the news of the pregnancy with the public via the Kensington Palace Twitter, which confirmed that the couple is expecting their baby in Spring of 2019. Their full statement read:

Meghan Markle and Prince Harry's announcement comes five months after the couple's historic wedding at Windsor Castle. It also comes ahead of their first royal tour as a married couple through Fuji, Australia, Tonga, and New Zealand.

Markle and Prince Harry landed in Australia on Monday morning, according to E! News. Ahead of their arrival, the Prime Minister of Australia Scott Morrison congratulated the royals on Twitter. He wrote: "What fantastic news! Australia is thrilled for you both. Looking forward to sharing in the joy during your stay down under."

According to a Kensington Palace press release, Markle and Prince Harry's visit will focus on youth leadership, as well as environmental and conservation efforts. The couple will also support the 2018 Invictus Games, which begin on Oct. 20 in Sydney, Australia. The Paralympic style event was co-founded by Prince Harry, and is meant to help servicemen and women rehabilitate through sports.

On Twitter, the aforementioned royal commentator, Omid Scobie, shared that Markle sought medical consultation before embarking on the trip. On Twitter, he wrote: "For those asking, Duchess Meghan did receive medical advice before deciding to continue with travel to Fiji and Tonga. It’s worth noting that she will not be at the early morning Fiji War Memorial engagement in Suva or the Colo-i-Suva forest site that Harry is doing solo." Scobie also tweeted that a Kensington Palace spokesman confirmed the Duchess was in "good health."

The royal baby will grow up alongside many cousins. In April, Kate Middleton, the Duchess of Cambridge, and Prince William welcomed their third child, Prince Louis. The couple are also parents to Princess Charlotte, who is 3, and Prince George, who is 5. In England, the arrival of a royal baby is an event, and abroad the world will definitely be waiting for baby updates from the Duke and Duchess of Sussex.

It's been an eventful year for the Markle and Prince Harry. In addition to getting married, the couple has embarked on diplomatic international trips and are both expanding the philanthropic work of the Royal Foundation. After the excitement and hard work, the Duke and Duchess of Sussex will likely be happy to settle down and celebrate the start of their family with relatives and friends.