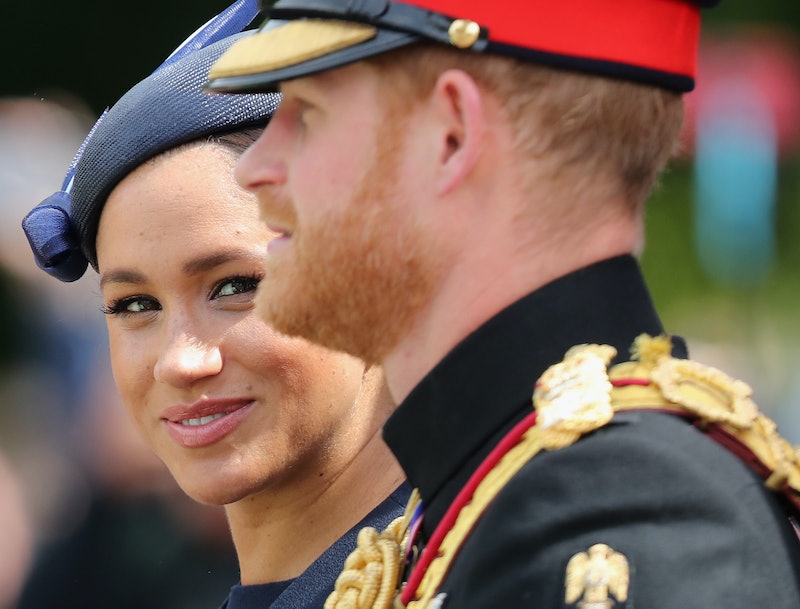 It’s no secret that Meghan Markle has become a style icon since becoming (and starting) a part of the royal family. And since her return to public appearances after baby, Markle is flashing a new diamond ring from Prince Harry that will continue leaving fashionistas in awe.

On June 8, the Duchess of Sussex was brought back out on the town since the birth of her son Archie for the Queen’s annual birthday parade. As she waved at fans throughout the crowd in her first public appearance since baby Archie’s birth, Markle was spotted with some new bling on her left hand.

According to an Us Weekly source, the band on Markle is “an eternity ring/anniversary gift” from Prince Harry. Although fans online had other suggestions behind the ring’s meaning, the ring simply marks two huge milestones for the couple. The Duke and Duchess tied the knot officially on May 19, 2018, which just so happens to be around the same date their baby boy was born.

“We are pleased to announce that Their Royal Highnesses The Duke and Duchess of Sussex welcomed their firstborn child in the early morning on May 6th, 2019,” read a statement on the royal couple’s Instagram page. A family like the royals are so close-knit, birthdays and wedding anniversaries fall in the same month.

An eternity ring is different from an engagement ring or a wedding ring, but holds similar significance. According to The Diamond Store, someone gifts their partner with one of these rings to "commemorate an important occasion in a couple’s relationship, such as a big wedding anniversary or the birth of a baby." In the case of the Duke and Duchess of Sussex, the ring is probably to celebrate both special occasions. Upon closer inspection, Markle now wears three different rings on her finger: The engagement ring, a wedding band, and now the eternity ring.

The eternity ring on Markle's finger is much different from the ring she had worn when she and Harry first got engaged. Upon closer inspection, the eternity ring is more of a band of diamonds whereas Markle's engagement ring was much thicker, in which it featured three oval cut diamonds on the top with a gold thin rounded band to support all that ice.

Eternity rings seem to be a recurring theme in all of the royal family's milestones, including Prince William and Kate. According to People, the Duke and Duchess of Cambridge also had a similar setup where Will gave Kate an eternity ring as well after Prince George was born.

Jewelry is a common factor that has kept the entire family close. In the Amazon Prime documentary “The Diana Story", Diana's butler Paul Burrell explained that Harry took his mother's ring from her jewelry collection in memory of her. Years later, Harry gifted it to William to give to Kate in the event that the ring would see a second lifetime.

For a lot of families, rings represent milestones. And a family so royal like this on, they're not so different from the everyday commoner.